This indicator measures per capita access to parks based on geographic proximity to recreational open space. Values are reported as the percentage of the regional population with access to at least four acres of parkland per 1,000 residents and at least ten acres per 1,000 residents. Generally, the four-acre standard is appropriate for denser communities, while the ten-acre standard is intended for less-dense areas.

To identify a more appropriate goal, CMAP staff conducted a GIS analysis to determine the percentage of the population that could gain access to four or ten acres per 1,000 residents by strategically targeting currently vacant land (as defined in the CMAP Land Use Inventory as “land in an undeveloped state, with no agricultural activities nor protection as open space”) for conversion to parks in areas currently below these park access thresholds. With an optimal conversion of some of the region’s vacant land into parks, it would be possible for 65 percent of the population to have access to four or more acres of parkland per 1,000 residents, and for 40 percent to have access to ten or more. While CMAP does not advocate for converting all vacant land to parks, this number provides a useful ”ballpark” estimate for what is possible. This is an ambitious goal, but not unattainable, as land use changes during the next 35 years may reduce the land needed for transportation and utility corridors, while changes in precipitation patterns may increase the demand for open space providing stormwater management. Once these 2050 targets were identified, a straight-line projection was used to determine interim targets for 2025.

Four or more acres per 1,000 residents

Ten or more acres per 1,000 residents

Indicator
Graphical representation of data follows. You can skip to data download
Access to Parks
Key
Source
CMAP analysis of data from the CMAP Land Use Inventory and the U.S. Census Bureau’s 2010 Census.
See Indicators Appendix for methodology 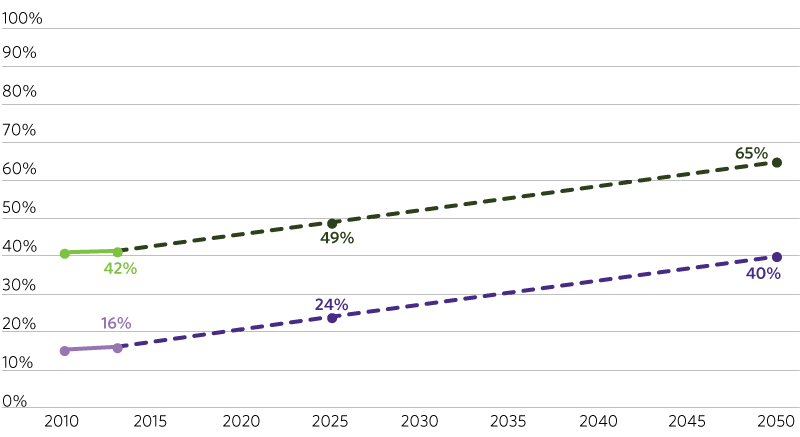 Indicator
Graphical representation of data follows. You can skip to data download
Access to Parks in Economically Disconnected Areas
Key
Source
CMAP analysis of data from the CMAP Land Use Inventory and the United States Census Bureau’s 2010 Census.
See Indicators Appendix for methodology 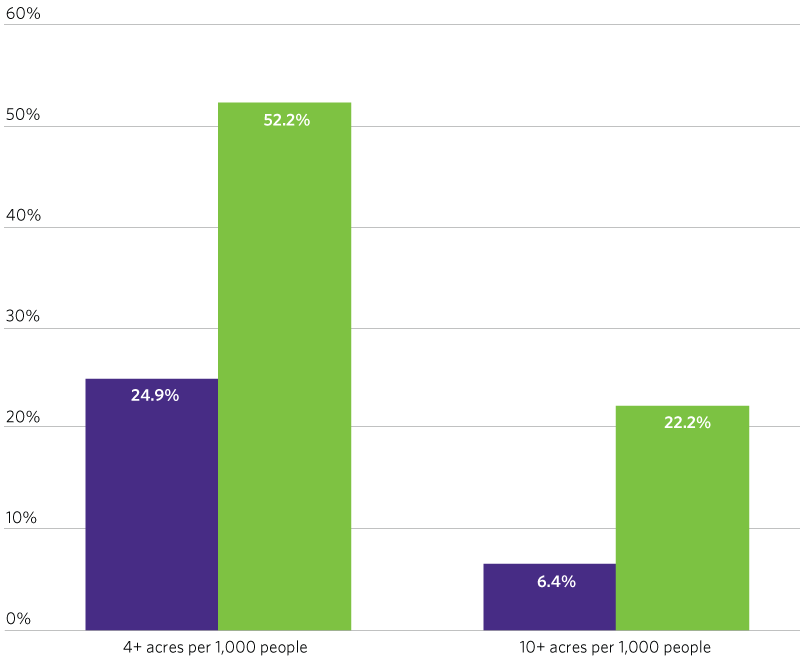 While this indicator is nominally a direct continuation of the GO TO 2040 “Regional Access to Parks per Person in Acres” indicator, the major flaws in the previous version’s methodology (described above) unfortunately render the GO TO 2040 data and targets virtually meaningless. This indicator is effectively new for ON TO 2050.