Like pavement condition, tracking bridge condition helps measure the region’s progress on improving the existing transportation system. This indicator measures the percentage of bridge deck area of NHS that are in “poor” condition. While a “poor” classification is the lowest condition rating for a bridge, it should be noted that it does not necessarily mean that a specific bridge is unsafe. This measure is also a federally required performance measure under MAP-21.

Current (2017) NBI data indicate that 8.6 percent of the NHS bridge deck area in the region was classified as being in “poor” condition, which represents almost 2.8 million out of a total 31 million square feet of NHS bridge deck area in the CMAP region. Over the last decade, the measure has fluctuated between 7.6 and 11.3 percent, but since the average NHS bridge in the CMAP region was built in 1971, more old bridges can be expected to lapse into the “poor” condition every year.

The targets were developed based on a review of historical trends, average bridge characteristics, and consideration of the potential new bridges with high quality deck area. The 2025 and 2050 targets call for a continuation of the recent rates of improvement, and adequate funding levels that allow for the continuation of timely bridge maintenance programs. 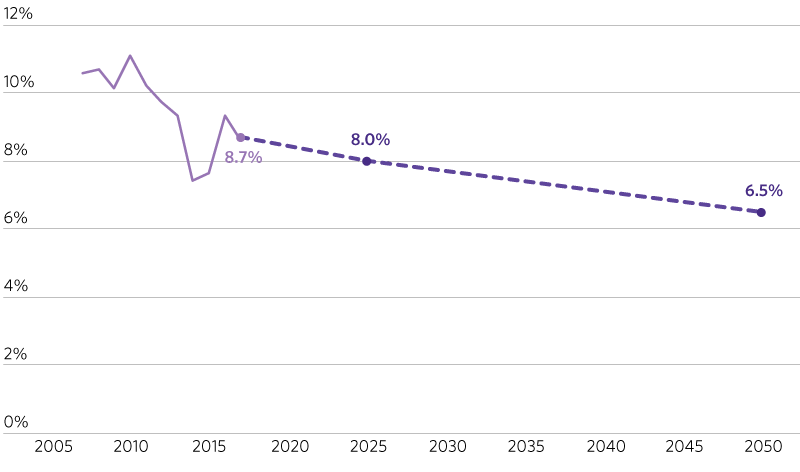 This indicator is new to ON TO 2050. It has replaced GO TO 2040’s “Percentage of Bridges in ‘Structurally Deficient’ Condition” indicator as part of CMAP’s efforts to align plan indicators with the MAP-21 performance measures where significant overlap exists.