This indicator measures the State of Illinois’ share of total U.S. venture capital deals. Innovation in new goods, services, processes, and technologies drives economic growth. Some of these innovations reach the commercial market through new business startups. These newly created firms can face substantial costs for researching, developing, and marketing new products or services. In these instances, investors can support high-risk, potentially high-growth startup companies through venture capital funding. Venture capital therefore plays an important role in the business startup process by providing support to businesses before they are financially sustainable or able to access traditional funding streams. Such investments tend to finance innovative ideas and companies in high-growth sectors.

Since the mid-1990s, the state of Illinois has accounted for 1-3 percent of all VC deals in the U.S. Trends show that the Midwest (defined as Illinois, Indiana, Michigan, Missouri, Ohio, Wisconsin, and western Pennsylvania) is accounting for an increasing proportion of total VC deals; however, Illinois’ proportion of deals has not kept pace. In 2002, the Midwest accounted for 3.9 percent of all VC deals; by 2016, this proportion increased to 7.5 percent -- an average 0.3 percentage point increase per year. The goal between now and 2025 is to increase the number of VC deals in the state such that Illinois’ share of total U.S. VC deals grows at a rate of 0.3 percentage points per year. This growth is equivalent to the overall growth rate experienced by the Midwest, and mirrors the increases seen by peer regions such as Northern California and New York. Because venture capital deal making is partially driven by industry mix, the goal for the Chicago region will be to reach 5.5 percent of all VC deals nationwide by 2025, and then maintain this level of robust investment activity and availability into 2050.

2025: Illinois accounts for at least 5.5 percent of all U.S. venture capital deals

2050: Illinois continues to account for at least 5.5 percent of all U.S. venture capital deals 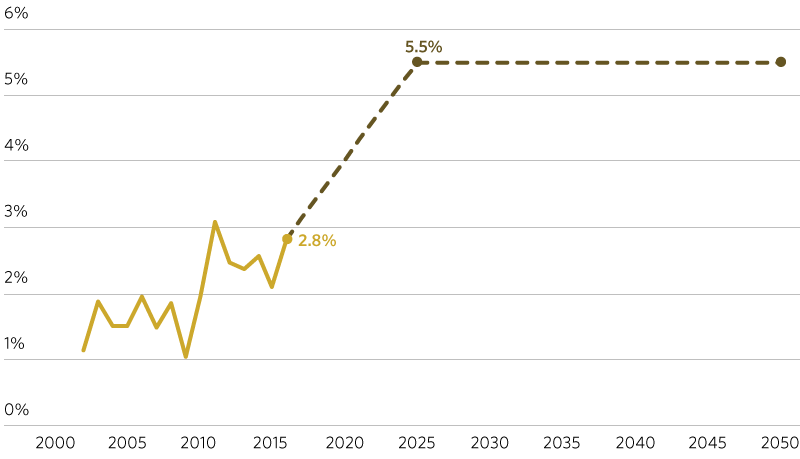 This indicator was introduced as part of the GO TO 2040 Plan Update, with a 2020 target of 5.4 percent. Since the Plan Update, Illinois’ share of U.S. venture capital deals increased slightly to 2.8 percent in 2016.