Because of pressing needs on the existing expressway system and the region’s limited financial resources, ON TO 2050 does not make major commitments to building and then maintaining new roadways to serve mostly future demand. Instead, the region must reinvest in the existing system. The region’s expressways were largely built in the 1950s and 1960s, and the standard lifespan of these facilities is 50 years. While pavement and bridge rehabilitation can extend the life of these assets, by 2050 the only economical improvement will be a complete rebuild. Due to lagging investment in the region’s road system, that rebuild is needed almost immediately in several cases. By emphasizing reinvestment in the current system, the region can also help support existing communities and, crucially, limit the environmental impacts and long-term costs of constructing new infrastructure. For all expressway projects, implementers will have to consider opportunities to defray construction costs, improve system performance, and support transit service through tolling and managed lanes, as well as consider the value for money and public risk that a PPP might provide as a project delivery mechanism.

The oldest parts of the existing system are also the most affected by chronically unreliable travel times and in some places have major safety problems, both of which can be addressed through design and investments in active traffic management as part of the reconstruction. In some cases, adding capacity through new managed lanes is also appropriate. Managed lanes make the most of any investment in new road capacity by using pricing to control the amount of traffic entering the lanes, which in turn helps keep the lanes uncongested. They also give travelers an option to ensure reliably fast trips even during peak periods.

The following are the constrained regionally significant expressway projects

Costs displayed below are the total capital costs for the projects, including both reconstruction and new capacity, in 2018 dollars. Fiscal constraint is based on year of expenditure new capacity costs and incremental operating costs.

The Elgin O’Hare Western Access (EOWA) project will provide a new, limited-access facility to reduce congestion and improve access to the airport, supporting the ongoing modernization and expansion of O’Hare. Federal approval for the EOWA was given in 2013, and construction is now underway. The project includes three main components: reconstructing and widening the existing Elgin O'Hare Expressway, extending the expressway east to O’Hare, and adding an expressway around the western side of O'Hare from I-90 to I-294 (the western bypass). All three components will be tolled. It is expected to include express bus service. The Tollway completed the work along the existing Elgin O’Hare Expressway in 2016 and completed the extension of the expressway east to Illinois Route 83 in 2017. The construction of the remaining components of the project is expected to be complete in 2025.

The Jane Byrne Interchange Reconstruction project modernizes the busiest intersection in the region, which has not had a major rehabilitation since it was first built more than a half-century ago. While it is mostly a reconstruction, an additional lane is being added on the east-north and north-west ramps, as well as three new flyovers. A new through-lane will also be added on I-90/94, correcting a deficiency that forces drivers to switch lanes when entering the interchange. Both the capacity and reconstruction elements of the project are considered constrained in ON TO 2050. The new ramp configurations and added lanes are expected to improve safety and significantly reduce crashes for all users. The project is currently under construction.

The I-55 Stevenson Expressway is one of the most congested segments in the Chicago area. This project would add managed lanes from I-355 to the Dan Ryan. Because of the wide inside shoulder with full-depth pavement along part of the route, adding managed lanes can be relatively inexpensive, making it the most cost-effective congestion reduction project evaluated. IDOT currently anticipates adding two new lanes to assure travel time reliability. Given the success of the I-55 bus on shoulder service, IDOT should specifically incorporate bus priority features into the roadway design and plan for increased service as an improvement over the current bus on shoulder service. Riders on this service would benefit as free users of the managed lane.

IDOT is seeking to build the project through a public-private partnership. It will be critical for the Department to protect the public interest by using a PPP structure that transfers some of the risk to the private partner. It is not assumed that all existing lanes will be tolled as part of this project, but over the longer term, when the adjacent general purpose lanes are reconstructed as part of I-55 Stevenson Expressway Reconstruction (RSP 137), tolling should be implemented on all lanes. This project is also supported in the Will County Community Friendly Freight Mobility Plan.

This section of I-55 from I-80 to Coal City Road, contains a 1,400-foot bridge over the Des Plaines River that was built in 1957 and requires frequent rehabilitation. Also importantly, this southern segment of I-55 in Will County serves three large logistics parks and two intermodal rail terminals. The road is typically two lanes in each direction, an operational challenge because of the large numbers of trucks entering, exiting, and traveling on the road. This project would make near-term interchange and spot capacity improvements and ultimately add an additional lane.

Due to the high volume of trucks on I-80, local safety concerns, and other travel needs, I-80 east of US 30 should also be expanded to include managed lanes, with a full examination of options that improve operations across the whole I-80 corridor (in conjunction with RSP 36) and includes consideration of truck-only lanes, full facility tolling, and managed lanes. This project is also supported in the Will County Community Friendly Freight Mobility Plan.

Western I-80 Reconstruction and Mobility Improvements (Ridge Road to US 30), RSP 36

The western segment of I-80 from Ridge Road to US 30 in Will County is in critical need of improvement, with failing pavement conditions and the bridge over the Des Plaines River requiring replacement. While this segment has immediate needs, and IDOT will soon be seeking design approval, a full examination of the I-80 corridor to include prospects for developing managed lanes, including truck-only lanes and full facility tolling, is recommended. This project is also supported in the Will County Community Friendly Freight Mobility Plan.

O’Hare International Airport and its surrounding freight and manufacturing development are an economic engine for the region, but the area experiences significant congestion and unreliable travel times. The I-190 Access Improvements project consists of reconfiguring arterial access to I-190 and O’Hare International Airport to improve mobility as well as ultimately reconstructing and adding capacity to mainline I-190. Elements of this project are under construction or have been completed. There is a need to evaluate a long-term funding strategy for this project, which could include tolling.

This project would reconstruct the second oldest pavement on the expressway system and address many bridges that are in poor condition. The Eisenhower consistently ranks as one of the five most congested segments in the region, partly because of the bottleneck created where it drops from four lanes to three west of Central Avenue. It suffers significant safety problems because of several left-hand ramps. I-290 is a multimodal corridor, and this project is closely linked to CTA Blue Line Forest Park Reconstruction (RSP 93), as well as a high-performing potential segment of Pace’s proposed express bus network. This project will include improving bicycle and pedestrian facilities near CTA stations and interchanges in the project corridor, construction of a multi-use trail connecting the Prairie Path and Columbus Park, and configurations that can accommodate express bus service or other future transit investments. The project received a record of decision from FHWA in 2017 to rebuild the expressway and add a high-occupancy toll lane. Given the cost of the project and the lack of alternative fund sources, IDOT should strongly consider tolling the entire facility to offset its construction cost as well as potentially implementing a dual managed lane to improve reliability. 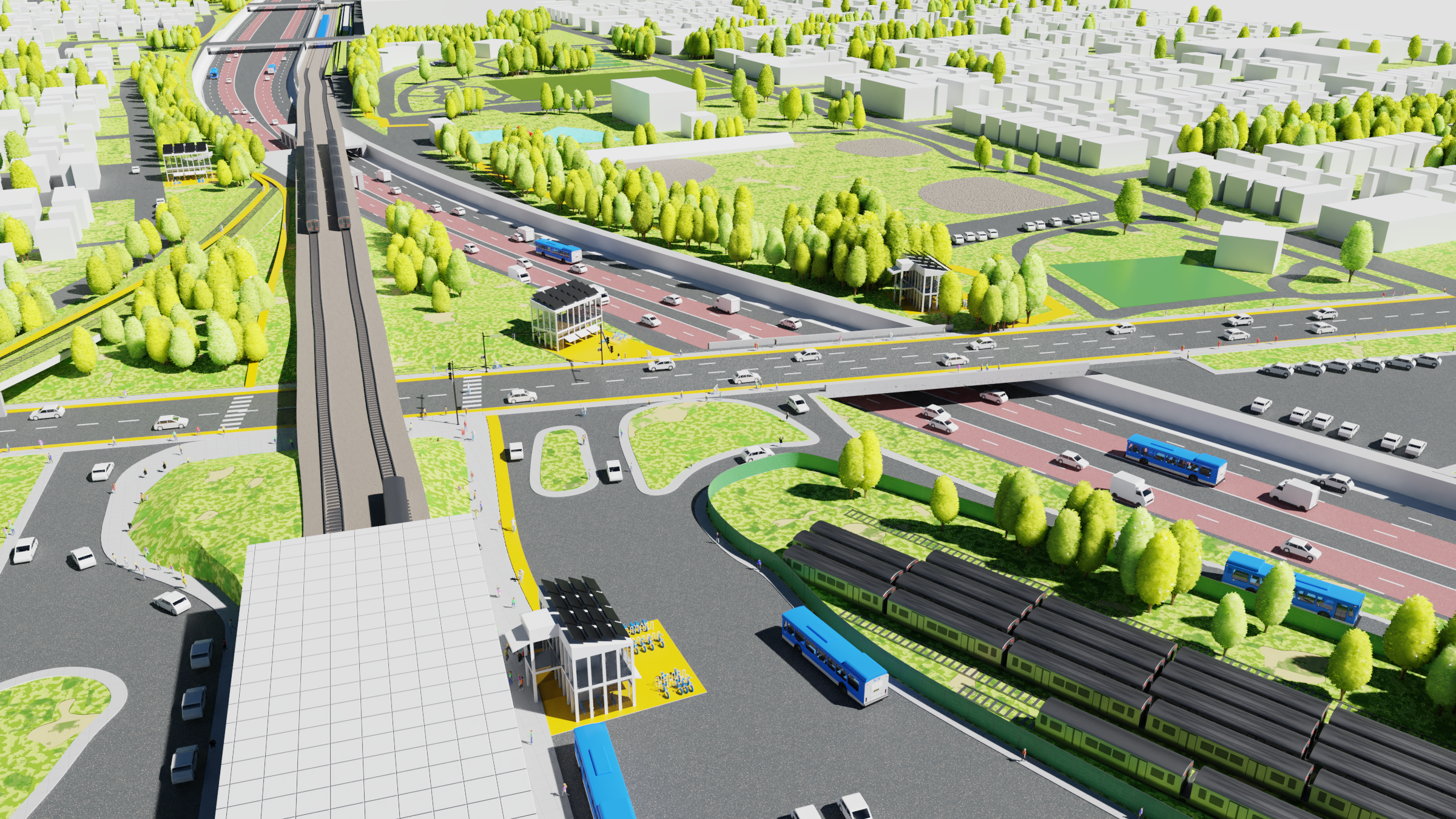 This project would improve a cloverleaf interchange that is integrated with ramps to and from the Woodfield Mall in Schaumburg, causing weaving, congestion, and crashes. Some of the loop ramps would be replaced with higher-capacity directional ramps to reduce crashes and improve flow. This project has been studied but requires additional comprehensive analysis, including studying opportunities to support future transit service.

The I-290 Eisenhower/I-294 Tri-State interchange has insufficient capacity on ramps and heavy truck volumes. Loop ramps and weaving movements cause congestion and high crash rates. Congestion on southbound I-290 can extend to 14 hours of the day. This project will reconstruct the interchange to reduce weaving movements, replace loop ramps with higher-capacity directional ramps, and reduce crashes. A key benefit will be to improve capacity from the south leg (I-294) to and from the northwest (I-290), which is a regional bottleneck. The Tollway will advance these improvements as part of I-294 Central Tri-State Reconstruction and Mobility Improvements (RSP 23).

The central portion of the I-294 Tristate (95th Street to Balmoral Avenue) has the oldest pavement on the expressway system, yet it is also the most-heavily used portion of the Tollway system. This project proposes to rebuild the expressway and add a flex lane along portions of the route. This presents opportunities to integrate express bus service, and the design of the project should specifically include express bus facilities.

The crossing of I-294 and I-57 is the only place in the region, and one of very few locations in the country, where two interstates cross but do not have an interchange. The I-294/I-57 interchange project will connect these two interstates for improved accessibility to and from the south suburbs and for improved north-south regional travel. Construction of Phase 1 was completed in 2014 and provided new ramps to connect northbound I-57 to northbound I-294 and southbound I-294 to southbound I-57, as well as an entrance and exit ramp from I-294 to 147th Street. The final phase is planned for completion in 2024.

ON TO 2050 covers a planning period of 32 years, during which many expressway segments will come to the end of their useful lives. Many of these segments were submitted as regionally significant projects with both reconstruction and additional capacity components. In future project studies on these segments, adding capacity should be considered, and CMAP’s evaluation suggests that in many cases this capacity would be beneficial. However, in ON TO 2050, only the reconstruction elements of the following projects are constrained: