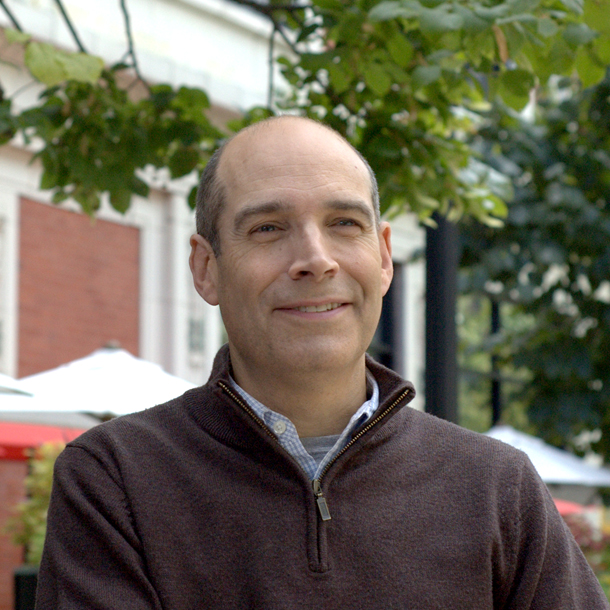 For years, GEOFFREY BAER has reported on the unique communities of metropolitan Chicago. His video tours are a staple of WTTW-TV, giving residents a televised glimpse of their own hometowns and parts of the region that they have yet to visit. In person, he conveys a combined sense of history and progress that helps people think differently about where and how they live.

Geoffrey lives in Lincoln Square on Chicago's north side, where he enjoys strolling through the compact neighborhood, with its many locally owned restaurants, shops, culture, parks, and diverse population. Lincoln Square is "just vibrant, filled with street life," he says. "You can easily walk to public transportation. If you come to the plaza on a summer evening or a weekend, it's just jammed with kids and families. I think what makes a community livable is that it's walkable."

Street musicians often perform, partly because of the nearby Old Town School of Folk Music. "People just drag their lawn chairs over to the plaza and listen to the music," Geoffrey says.

Geoffrey highly values the many public transportation options provided in Lincoln Square, including buses and CTA and Metra trains. "You don't have to get in your car to go everywhere. When you're walking, it's not just about getting where you're going -- you can have a casual conversation with someone you encounter on the way. When you're driving a car, it's hard to stop in the middle of the street, roll down the window, and chat with a neighbor passing by." 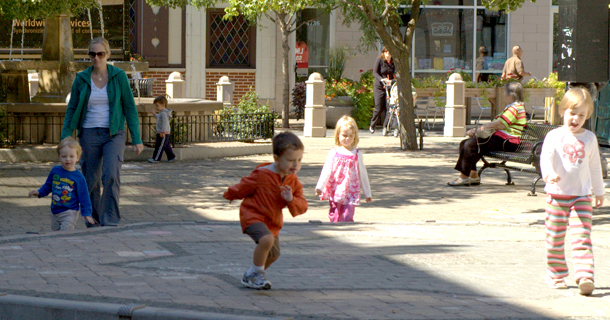 Transit also gives Geoffrey's parents, who ride Metra from their home in the north suburbs, the opportunity to avoid driving when they visit. But Geoffrey points out the irony that, while he lives just a couple of miles from his job, it is difficult to reach by public transportation. He rides his bicycle to work when possible, although he sometimes has no choice but to drive.

While Lincoln Square is what Geoffrey calls a "model urban neighborhood," it has a lot in common with smaller downtowns that dot the region -- places he knows well through his televised tours. Due to his knowledge of architecture and history, Geoffrey understands how the region and its communities got where they are today, and where they can go if they plan effectively.

"In telling the stories of communities all over the region for Channel 11," he says. "I'm always amazed at how excited people are when they realize how much history there is in their own communities. So let's remember we're making history every day. Someday my kids, when they're learning history, are going to learn about what we did. So we should be trying to leave legacies for the future."