From May 27 to September 10, 2009, the Chicago Metropolitan Agency for Planning (CMAP) launched an important period of public input for the GO TO 2040 comprehensive regional planning campaign. Referred to as "Invent the Future" this phase solicited feedback from residents and stakeholder groups regarding several alternative future scenarios that CMAP had created to describe how the region might develop in coming years and decades. Each scenario combined a number of different planning strategies. "Invent the Future" was a large-scale effort that encouraged residents to express their priorities for the future of the region. 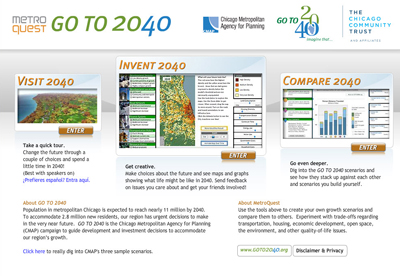 Over 35,000 residents participated through public meetings, on the web, or at kiosks located across the region. Throughout the summer CMAP asked residents to help us prioritize policies and tell us about the trade-offs they would be willing to support to attain the type of future they wanted for the region.

CMAP combined this input with the agency's extensive strategy research to begin finalizing GO TO 2040, the official comprehensive plan to guide development and infrastructure decisions across the region for decades to come. CMAP has issued a report that summarizes feedback via interactive web tools, workshops, kiosks, and booths at community festivals. See a related fact sheet that summarizes how CMAP is using the public feedback (see also this press release) and map that shows where workshops, kiosks, and festival booths were hosted across the region.

The "Invent the Future" report details how CMAP engaged the public in setting the priorities for the development of the preferred Regional Scenario.

On January 10, 2010, the CMAP Board voted unanimously to approve the GO TO 2040 Regional Scenario. The Regional Scenario establishes clear policy directions that CMAP will pursue in the plan itself, which is intended to guide growth and investment choices through mid-century and beyond in the counties of Cook, DuPage, Kane, Kendall, Lake, McHenry, and Will. Based on two years of research, analysis, and public input from the "Invent the Future" phase, the scenario tackles pressing issues that require coordinated solutions at the local and regional levels. 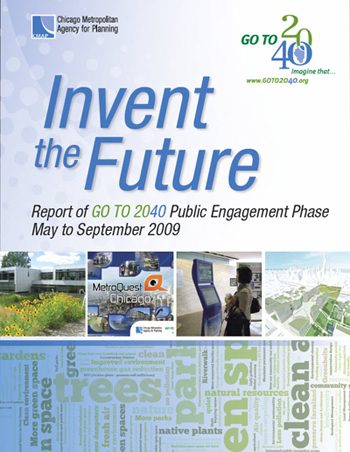