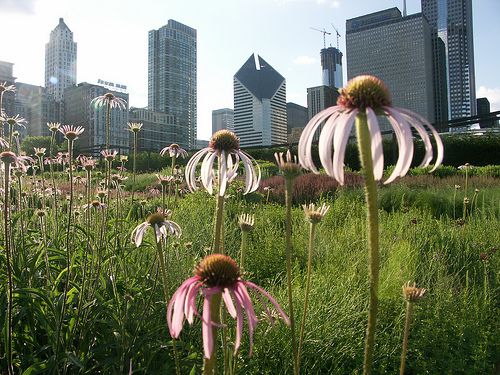 The federal government defines "low-income" to mean households at or below poverty level, and "minority" to include African-American, Latino, Asian, Native American, or Pacific Islander individuals. Currently, approximately 42% of the region's population is made up of these racial and ethnic groups, and 10% of the region's population is below the poverty level in terms of income. Areas within the region that have greater concentrations of minority or impoverished residents are shown in this map; these are termed "environmental justice areas" through the rest of this page. To evaluate environmental justice, the effect of the alternative scenarios on these highlighted areas was evaluated in a number of ways.

Between now and 2040, the environmental justice areas are forecast to grow by approximately 456,000 households and jobs, a growth rate of 22%. This is below the overall regional growth rate. Increasing household and job growth in areas with concentrations of minority or low-income populations can increase economic opportunity for residents of these areas. However, this also must be paired with strategies to prevent this growth from displacing current residents.

Access to jobs from environmental justice areas is also an important indicator, as it helps to describe the employment options available to residents of these areas. Regional jobs-housing access is also a stand-alone outcome; more definition of the concept is available on its outcome page.

Currently, residents of environmental justice areas have better job access (as this analysis defines it) than the regional average, mostly because of their proximity to transit and location near downtown Chicago.