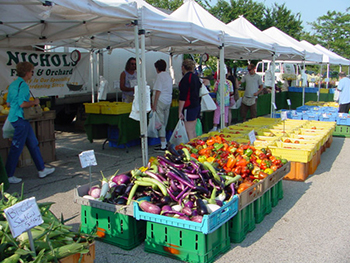 Food systems are becoming an integrated component of regional planning throughout the country. The food system is composed of a vast set of complicated relationships among growers, processors, distributors, retailers, researchers, advocates, and policy makers; however, consumers are often unaware of the intricate web that sustains us.

The GO TO 2040 plan gives the region an opportunity to plan for a diverse and robust local food system that exists along with the national and global food system and that is economically, environmentally, socially, and culturally sustainable.

In coordination with an advisory committee of regional experts, the Chicago Food Policy Advisory Council and the City of Chicago have prepared general recommendations for actions to improve food systems within the long-term context of the GO TO 2040 plan. These recommendations cover:

A report that provides more details on these recommendations is forthcoming and will be posted in this space when available; an executive summary is currently available.

The purpose of the questions below is to understand how today's planning policy and investment decisions – covering transportation, land use, housing, economic development, and the natural environment – might affect food systems in our region in 2040.

How would food systems be affected by different economic development policies: focusing on investments in human capital (improving the region's workforce); infrastructure (investing in physical infrastructure such as transportation facilities); or innovation (including but not limited to technological innovation)?


How would food systems be affected by different land use policies: focusing on dense, infill development; moderate densities with emphasis on community-centered design; or low-density new development?


How would food systems be affected by different land conservation policies: focusing on preserving large areas of open space for biodiversity; providing parks for community access; or providing open space as part of new development?