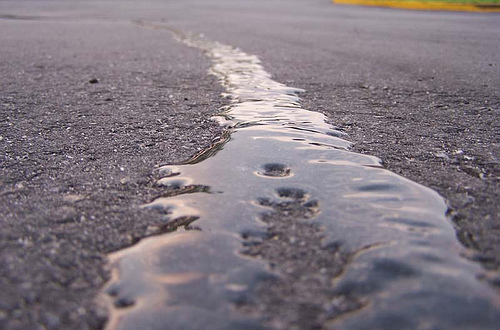 "Impervious surfaces" are materials through which water cannot pass, like concrete, asphalt, or brick. When rainwater falls on these types of surfaces, it is unable to be absorbed by the soil, and instead runs off. High concentrations of impervious surfaces require stormwater management techniques to be used to manage this runoff.

Reducing the amount of impervious surfaces in the region will have the effect of improving water quality and reducing the need for new stormwater management infrastructure.

Approximately 505,000 acres of the region's land (19.3% of total area) is currently covered by impervious surfaces. These are unevenly distributed across the region, as this map shows; areas of denser development have far more impervious surface. By 2040, if current trends continue, this number is projected to increase by 183,000 acres, to 688,000 acres (26.2% of total area). This increase is generally caused by development on currently undeveloped land.

The impacts of each scenario on imperviousness are described below, estimating the number of impervious acres added compared to the current trend (with a decrease considered to be an improvement). The base figure is 183,000 acres.

In addition, because some streams are much higher quality than others (it may be the case that streams with low watershed imperviousness are still low quality streams), this analysis tries to indicate potential impacts of growth on sensitive streams. This was done by tabulating the amount of new imperviousness created in the watersheds of the streams rated "A" or "B" by the Illinois Department of Natural Resources. The base figure is 46,730 acres of new imperviousness draining to sensitive streams under current trends.