211 Service originated in Atlanta, Georgia and was launched by the United Way Atlanta just over a decade ago in 1997. Unlike 411 which provides directory assistance and can charge a fee for service, or 311 which provides information about non-emergency municipal services, 211 is a service line that provides callers with information and referrals only about human services and related community information. The United Way has categorized 211 referrals and they are listed in Table 1; the agencies that provide the human services are referral agencies. Throughout majority of the states, 211 services remain standard, with some variation.

The two leading sponsors for nationwide 211 services are United Way and AIRS (Alliance of Information & Referral Services). The United Way, a national network of nearly 1,300 local organizations, focuses on education, income, and health projects supporting their mission of community development (United Way). AIRS is a professional association for over 1,200 community information and referral providers (I&R) which specializes in creating and maintaining resource databases of programs and services that make information available through a variety of communication channels (AIRS). Additionally AIRS is the credentialing authority behind an accreditation program that measures an organization's ability to meet the AIRS Standards, and a certification program that evaluates the competence of I&R practitioners (AIRS). Both organizations have partnered to promote 211 services which align with their organizational missions. 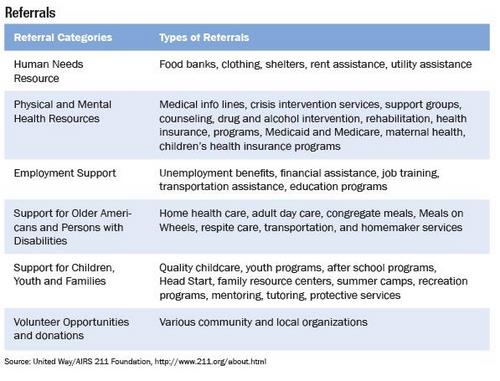 Although individual states and counties manage the 211 service, this service has been deemed a federal priority, especially after September 11th, 2001 and severe and devastating natural disasters like Hurricane Katrina. After the terrorist attack on September, 11, 2001 (9/11) Congress saw the potential for the system in emergencies and in 2002 granted states permission to use federal money for 211 systems intended to prepare for potential bioterrorism attacks (Strom, NY Times, Nov 2005). Seeing an opportunity to create federal funding assistance, the 211 Calling Act, co-sponsored by Senators Elizabeth Dole (R-NC) and Hillary Clinton (D-NY), is legislation designed to authorize $150 million for years one and two of 211 implementation, and $100 million for years three through five through the U.S. Department of Health and Human Services (HHS) to help implement and sustain 211 nationwide (211 Calling Act, United Way). States would designate, if they have not already, a lead entity for 211 which would develop a statewide plan for implementation and administration of the funds. States would be required to provide a 50% match in order to draw down the federal dollars (211 Calling Act, United Way). This bill was re-introduced in January 2007 and was referred to the Senate Health, Education, Labor, and Pensions Committee and is still under consideration (GovTrack).