A report released by the University of Texas at Austin emphasizes that the benefits could outweigh the costs for nationwide implementation of 211 services. However paying the costs of implementing and operating 211 for several states and counties is an obstacle. Some states have initiated 211 operations but have ceased operations or decreased capacity due to budget cutbacks. For instance, in New York, for FY 2007-08 $6.3 million was set aside in the state budget for 211 services. NY 211 has been operating statewide since 2007, covering more than 70% of the population (211 New York). One year later, in July 2008, a 92% budget cut was announced for 211 services leaving only $500k allocated to 211(Associated Press, July 2008).

Table 3 (p.15) shows a comparison between Connecticut, Texas, and Washington on funding sources and operating budgets that support 211. As seen in Table 3, costs can vary significantly between states based on cost drivers and therefore it is difficult to assign a nationwide standard cost of operations for 211. As an example, in Texas a cost-benefit analysis on the Texas I&R network (O'Shea, Kegler, King, 2000) shows the variation between budget assumptions made in 1998 vs. 2000, highlighting the more significant cost drivers (Diagram 2). The more significant drivers that increased costs by year 2000 were the change in call volume, telecommunication costs and the cost of operating the area information call centers.

Overall, 211 service costs vary based on population size of service area, maintenance costs of the telecommunication network, referral database development, operational staff, cost centers, and other inputs that affect annual operations. Additionally, when 211 services are dependent on annual budget allocations, availability of funding can fluctuate greatly for some states. The primary goal of the 211 Calling Act is to designate the federal government as a reliable funding source to ensure that each state has an opportunity to operate 211. 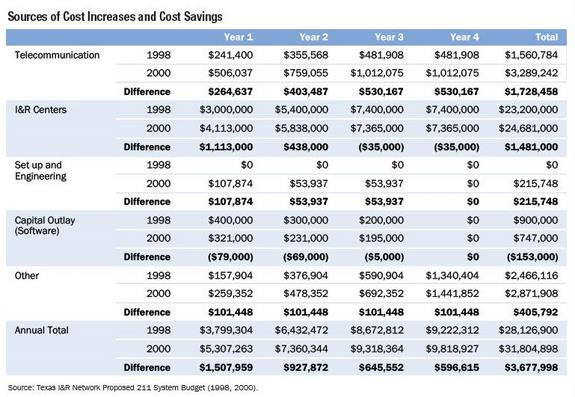 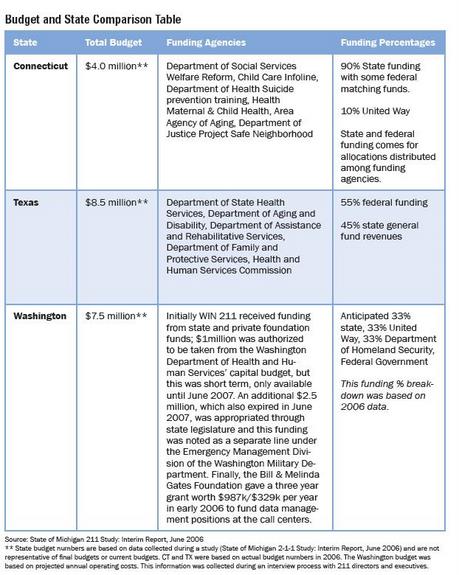