The 211 system involves both the county and state governments because in order for the system to be operational, the right model must be adopted and partnerships should be formed. There are three primary models that were created to describe how 211 service could operate throughout the country:

Each of these models has some unique qualities and participating states have selected the best models suited for their needs, but Model 2 has been selected as the best fit for majority of the states. Table 2 describes these models and their differences. Once a state decides that it wants to implement 211 services, a few key issues that require consideration are: telecommunication access through local and regional carriers, development of databases with human services resource information, operational staff and coordinators, sponsoring governmental and private agencies, and physical and web call centers. 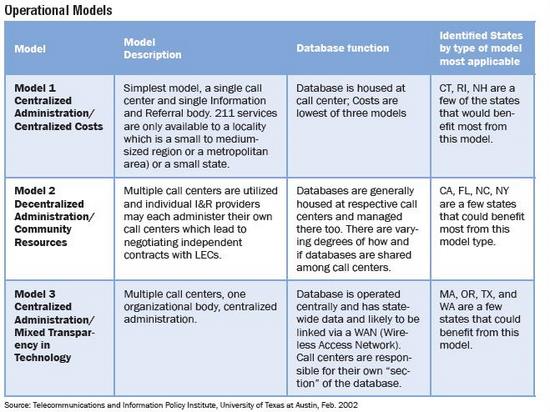 As seen in Diagram 1, 211 services are being implemented at different rates across the country. Additionally with current technology, communication options are being maximized. In fact, based on 2006 data, forty states have a website available, eleven states have wireless accessibility, and thirty seven states, including DC and Puerto Rico, provide traditional land line accessibility (Public Policy Associates, June 2006).

Development of an online web interface for 211 users is an important part of providing information and referral resources. On many 211 websites users can log on and search a statewide, regional, or city database for services by entering their zip code, city location, or type of service being requested. The web interface allows users to find quick referrals and information without contacting an operator.

During and after the process of implementing 211 services there are some common operational challenges that states have been facing. One challenge is whether or not the state will take the lead role in rolling out and standardizing 211 or decide to decentralize efforts, leaving it to individual local governments. Another challenge is determining whether or not call volume and budget justifies 24 hour coverage, despite AIRS 211 standards which require it (Public Policy Associates, June 2006). Of course, the most significant challenge is sustainable funding, as seen in the Ventura County, California example.