Illinois' agricultural industry has generated jobs, affected land values, and contributed to the Gross Regional Product, amounting to billions of dollars each year. Three factors strengthening the agricultural industry today are: 1) federal government funding, 2) changing attitudes toward local food production, and 3) the ethanol and biofuel boom. These factors represent a changing tide in the agricultural economy which will undoubtedly impact preservation. 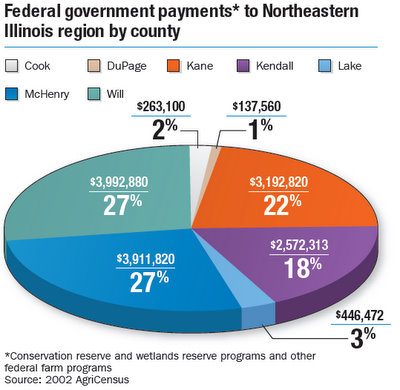 Funding receipts are likely to change with the new Farm Bill 2008 which aims to alter program funding allocations, possibly increasing opportunities to save thousands of acres of farmland per year. The bill proposes to shift more funding toward a new system of conservation payments and less toward the traditional direct funding to farmers for commodities (Environmental Defense). Under the new Farm Bill legislation, 37 states containing over 550,000 farms should receive increased funding (Environmental Defense).

Additionally, the Farm and Ranch Land Protection Program (FRPP) operated under the Natural Resources Conservation Service (NRCS) matches 50% of conservation easement payments from a state, local government, private or not-for-profit organization. Illinois has taken advantage of federal funding, but the FRPP program has not been fully utilized. The program is not fully utilized in part due to local entities experiencing difficulties in securing funds for local matching (Illinois Department of Natural Resources). NRCS funded 978 Environmental Quality Incentives Program (EQIP) contracts on 199,621 acres, and provided more than $11.4 million to landowners to implement conservation plans; Illinois' NRCS received more than $1.8 million in FRPP funds and obligated some funds to Kane County to protect 558 acres of farmland (2005 Illinois NCRS Report).

Organic Farming
Increasing popularity of organic farming has allowed both producers and consumers to make sustainable contributions to their local economy and the environment. The market has grown considerably in the last decade increasing roughly 20% each year from 1998 to 2004 (Laux, 2006). Sales are projected to continue increasing anywhere from 9% to 16% until 2010 (Laux, 2006). The benefits of organic farming include: availability of fresh food for consumers, stabilization of soil qualities, increased job opportunities, and increased profits for farmers, all of which directly stimulate the local and state economy. Also, local farmland has the potential to play a key role in reducing greenhouse gas emissions through conservation farming practices.

According to local experts, organic farmers are only meeting less than 2% of the existing market for organic food in Illinois, met with product from Wisconsin, Illinois, and Indiana. Moreover, in a 2001 study analysis indicated that "more than 95% of the organic produce sold in the Chicago area comes from out of the region" (The Prairie Partners Group).

It is estimated that retail sales of organic food ranges from $502 to $628 million in Illinois (Sustain, Family FarmEd). The organic market within Illinois is brimming with opportunity, especially employment opportunities. On average, organic farming requires 11% more work per unit of production than ordinary farming practices (Kuepper & Gegner, 2004). This drives up the demand for labor thereby increasing the number of jobs. Studies have shown that the organic food products that have the highest premiums are fruits, vegetables, grains, and milk. In 2005, the amount of organic foods grew 16.2% and brought in $13.8 billion in sales nationwide (Organic Trade Association, 2006). The potential for the organic market is significant.

Ethanol and Biofuel Production
One of the most anticipated economic drivers for agriculture in Illinois and the other parts of the Midwest is ethanol production. Much of the demand for ethanol over the past few years and current future projections came after the passage of the Clean Air Act Amendments in 1990 and the National Energy Independence and Security Act (2007) by Congress. The Energy Security Act is focused on improving energy efficiency through reduced consumption and improved products. The Clean Air Act was created with the objective to reduce acid rain, urban air pollution, and toxic air emissions. Both Acts paved the way for increased use of ethanol--a form of renewable energy. The foreseeable use for ethanol is for a renewable bio-fuel, termed E85, 85% ethanol and 15% gasoline, which would be used to fuel a certain fleet of vehicles. Most automobile fuel in Illinois is composed of 90% gasoline and 10% ethanol (Illinois Corn Association). Due to its high corn crop production, Illinois has invested $1 billion in the ethanol industry, creating 800 jobs in plant operations and 4,000 jobs in industry-related services (Illinois Corn Growers Association). The expectation is that the U.S. will become less dependent on fossil fuels for gasoline in the future.

Although the spike in demand for ethanol and biofuels has provided a new opportunity for the agricultural economy in the Midwest, there are also potential negative repercussions that are being considered (Wescott, 2000). The high demand for corn, the main ingredient of ethanol in the U.S., would alter the current corn market and the overall commodities market. This could lead to higher corn prices and drive the need to substitute corn for animal feed. Also, the market for corn would influence farmers' decisions on how they rotate crops, causing less diversity in the farm fields. Lastly, it is likely that government outlays for farm programs would be reduced due to higher farm incomes. All of these changes would eventually mean higher food prices for consumers (Wescott, 2000). In fact, many reports indicate that food prices are already rising, though it is difficult to disentangle this change from other factors such as fuel prices.

Presently, 40% of the ethanol consumed in the country is produced from corn grown in Illinois (Illinois Corn Growers Association). There are 62 permits issued or under review for ethanol plants in towns and cities all over the state of Illinois (Illinois EPA). Ethanol also has high potential for tax income generation at the state level. The ethanol and gas mixture sold within Illinois is named gasohol and the state applies tax to 80 percent of the proceeds from sales of gasohol (IL Department of Revenue, 2004). Although there is high anticipation for ethanol in the region and nationwide, the actual results remain to be seen, but if ethanol does meet the expectations set, the agricultural economy, market, and policies will be led in a new direction. However, there is considerable concern about the actual environmental benefits of ethanol. CMAP will be examining this in greater detail in a separate report on energy.