The Agricultural Economy in Illinois 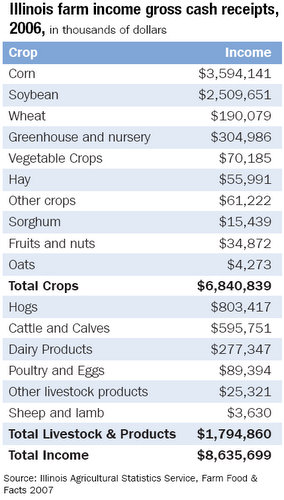 Illinois is clearly a leader in agricultural production, not only in the nation, but also globally. Illinois ranked seventh in the nation (2002) on value of all agricultural products sold, which totaled approximately $7.5 billion (2002) and ranked 1st in the production of soybean, 2nd in the production of feed grain and products, and 3rd in the country for total value of crop sales (USDA, 2002). For the fiscal year of 2006, Illinois still remained highly ranked in commodity production—2nd in both feed grains and soybeans. Also in 2006, Illinois exported 5.5% of the nation's agricultural products abroad (USDA Economic Research Services). Illinois is also a large provider of hogs and other livestock. The table to the left summarizes farm income for the State of Illinois in 2006.

The trends within the northeastern region of Illinois are consistent with the rest of the state. The region contains over 700,000 acres used for producing corn and soybean—the two primary crops (USDA NASS). Livestock is also an abundant commodity in the region; hogs and pigs, and cattle and calves are two major groups that were valued at over $42 million in 2004 (USDA NASS). Solely within the triangle of Illinois-Indiana-Wisconsin, agricultural goods valued at $29 billion have traveled 14 billion ton-miles (Federal Highway Administration, 2002). These agricultural goods are often transported nationally or internationally, contributing to the region's status as a major freight hub.

A majority of Illinois farms are operated by individuals or families, and the average age of operators is 55 (Census 2002).

Improvements in technology have decreased the necessity for manual labor in farming. Many farmers have sold their land, and there has been an increase in processed food production and consumption. The total number of jobs connected to agriculture (including wholesale and retail trade) for Illinois was approximately 951,000 in 2002 (Economic Research Service, USDA), having declined over the past few decades due to these trends. Additionally, U.S. food imports are on the rise according to recent trends, although trends are variable. A few contributing factors to increasing food imports include the changing American diet, more reliable supplies from foreign sources, improved shipping and storage technology, ethnic market demands and international trade agreements such as NAFTA. All of these factors directly affect the demand of domestic food production over time (USDA, 2002).

While farming profit margins have been declining, operational expenses have been rising. Prices for equipment and gasoline, cost of land, and feed for cattle and hog, have increased. Due to more expenses and shifts in demands, farming income fluctuated greatly between 2000 and 2006. In northeastern Illinois, the average production cost per farm was $111,000 (USDA, 2002) and the average net cash income of operation for farmers in the region was $19,325 per year (USDA, 2002).