The Housing Boom's Impact on Farmland

The 2006 estimated population of northeastern Illinois was 8,496,884 (CMAP). Table 2 gives a population breakdown by county, and the number of new building permits that were approved by each county. 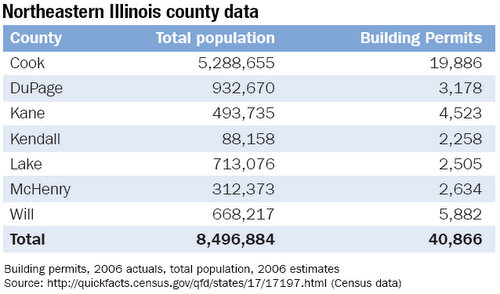 Approximately 41,000 new building permits were issued within the region for development during 2006. Most of this development can be classified as residential. Not only have building permits been in demand, housing sizes have also increased, making the footprint of new development even more significant. In 1970, the average home was 1,500 sq feet. By 2002, it was up to 2,230 sq feet (National Association of Home Builders, 2004). Also, as reported in the 2005 "Homes for a Changing Region" report, sponsored by the Chicago Metropolis 2020 and Metropolitan Mayors Caucus, many suburban jurisdictions require densities with no more than 3 or 4 homes per acre (Chicago Metropolis 2020).