Lake County was selected as a regional example because they have tracked land use changes very closely. As the third most populous county in the region, Lake County has seen significant changes over the last 5 years that have contributed to a decline in agricultural land use. Lake County experienced a 9% population growth between 2000 and 2005. Simultaneously, between 2000 and 2005, 8,500 acres of agricultural land were converted to other uses. Agricultural land still accounts for 35,021 acres, but the county continues to develop, meaning that conversion of much of this land to other uses is likely. Data Source: Lake County Caliper Report, "Measuring Lake County's Growth & Development", 2005 Land Use Inventory and Regional Framework Plan Implementation Report, November 2007 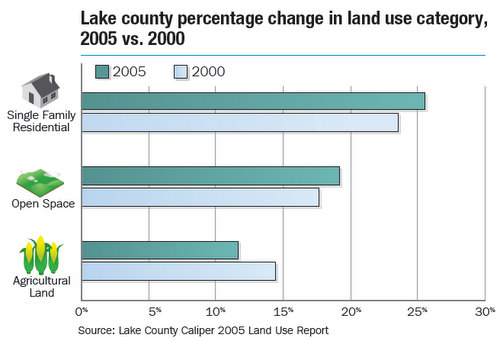