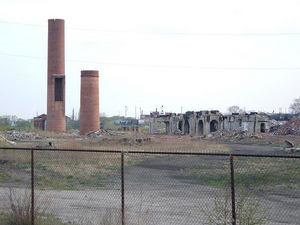 Brownfield redevelopment is both one of the most pervasive challenges as well as one of the largest potential opportunities faced by the region. Over the last two decades, widespread attention has been paid to the ideas of sustainable development in America's towns and cities. Redevelopment of brownfield sites is one approach that has gained significant political support to achieve these goals. The greater Chicago region has been at the forefront of this movement, with a variety of cutting-edge local and regional programs to facilitate brownfield redevelopment, as well as extensive non-profit involvement and private sector investment. But due to the region's industrial history, and the continued migration of homes and business further out into the undeveloped periphery, there is still a prevalence of brownfield sites throughout the region.

The GO TO 2040 plan recognizes this and has identified brownfield redevelopment as a potential strategy in the development of growth scenarios for 2040. This paper attempts to paint a picture of how the strategy of remediating and redeveloping brownfields would affect the region in terms of economic, environmental, and social impacts. In order to understand the existing situation, this paper includes an estimate of the number and distribution of both potential brownfield sites and cleaned-up sites throughout the region, as well as an overview of the existing local, state, and federal policies and programs in place.

The Small Business Liability Relief and Brownfields Revitalization Act, passed in 2002 (Public Law 107-118, H.R. 2869), defines brownfields as "real property, the expansion, redevelopment, or reuse of which may be complicated by the presence or potential presence of a hazardous substance, pollutant, or contaminant" (US EPA 1).

The definition of a brownfield includes the "perception" of contamination as well as the actual existence of it. This perception can be just as damaging as real contamination when it comes to redevelopment, especially when it comes to acquiring financing. This is also a factor in why the term "brownfield" is preferred over other terms often used in the past, which may evoke a negative connotation, such as "contaminated" or "derelict" land. In addition, "brownfield" also constitutes a semantic counterpart to the term "greenfield" which designates agricultural or undeveloped land usually on the urban periphery (DeSousa 2006a). 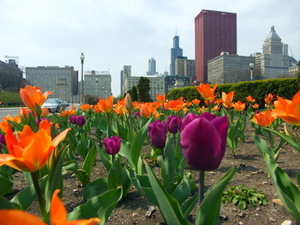 Why is brownfield redevelopment important to the region?

Brownfields can exist anywhere – ranging from a small, abandoned gas station in a rural community to a huge former steel mill in the urban core. The Chicago region is no exception. In fact, the region's rich industrial and manufacturing history, coupled with its fast-paced growth into the undeveloped periphery, most likely makes brownfield sites even more prevalent than other regions. A survey conducted in 2005 by the U.S. Conference of Mayors estimated identified brownfields within the city of Chicago at approximately 325 sites. This is in the top ten percentile of all the cities surveyed, and only includes "identified" sites (The US Conference of Mayors 2006). There is a widespread prevalence of brownfields throughout the rest of the region as well. This is explored further in Section II, Existing Conditions.

The perception or actuality of contamination on these sites often makes them difficult to redevelop due to the possibility of liability, the lack of certainty and finality in the remediation process, and the cost of remediation and site preparation. Until these challenges are adequately addressed, communities and developers will find greater incentives to build on greenfield lands rather than underutilized, previously-developed land. In turn, these brownfield sites sit vacant, often off the tax rolls, posing environmental health and safety risks, and acting like a cancer to their neighborhood.

But it is important to look at brownfields not just as a challenge, but also as an opportunity. If these sites are cleaned up, their redevelopment potential is huge. This is being realized, and translated into policy and programs both here in the region and throughout the county. An overview of these policies and programs are included in Section III, Existing Policies and Programs.

Instead of a brownfield site being viewed as a black eye in the face of the community, it could be viewed as a potential to offer dual benefits: both socio-economic revitalization and management of environmental risk. Generally, the economic benefits include increasing land value and enhancing local tax bases, creating jobs, and promoting economic renewal. The main environmental benefits include mitigating the health and environmental risks posed by contaminated soil and groundwater, restoring natural processes, and reusing urban land to minimize development pressure on greenfield lands. Among the various social and community benefits, brownfield redevelopment can revitalize neighborhoods, improve public health and safety, increase housing availability and mix, and promote equity, especially among minority and low-income groups.

Furthermore, brownfield redevelopment is a key strategy in accomplishing the GO TO 2040 Regional Vision, a set of shared values for the region that were expressed through a comprehensive public participation process and recently adopted.

According to the GO TO 2040 Regional Vision, "We will maximize the competitive advantage of existing physical infrastructure by encouraging reinvestment in our communities through mixed-use, compact development and redevelopment that emphasizes infill. Reinvestment will occur through both public and private means, will focus on both people and places, and will contribute to community prosperity, affordability, and vitality across the region" (CMAP 2008).

The links between brownfield redevelopment and its impacts are explored further in Section IV, Impacts of Brownfield Redevelopment.