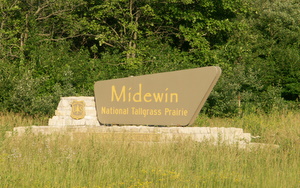 Midewin National Park is the first national tallgrass prairie which holds 19,000 acres; this site was once held by the U.S. Army and used as an ammunition plant during World War II. In 1996 the acres were transferred to the U.S. Forest Service which administers the park in cooperation with the Illinois Department of Natural Resources and several private and public partners. A catalyst for this transfer was the Illinois Land Conservation Act of 1995 which mandates that Midewin meet the following objectives:

To conserve, restore, and enhance the native populations and habitats of fish, wildlife, and plants.

The Midewin Land and Resource Management plan was adopted in recent years and it is a long term plan that extends out 20 years and is focused on developing native prairie and woodland communities, as well as habitats.

This restoration park is located in southwestern Cook County and offers not only prairie restoration but also a natural landscape for the community. There is a small full-time staff at Midewin National Park including a restoration team, engineering team, and public services team. Additionally none of this achievement would be possible without the numerous volunteers who assist during the year with invasive species control, removal of field drain tiles, drainage ditches, and planting and cultivating species.

Thirty-three years ago pcbs (polychlorinated biphenyls) were discovered in the Waukegan Harbor, located in Lake County, IL. U.S. EPA representative, Scott Cieniewski, described Waukegan Harbor as one of the "worst PCB sites throughout the Great Lakes." The pcb pollution in the harbor, highly pollutant congener particles, resulted from the operations of OMC (Outboard Marine Corp), once owned by the billionaire George Soros; OMC manufactured engines. Additionally, other industrial organizations still operate on or nearby the harbor. The National Plant for Drywall is nearby the harbor and meets a daily quota of producing 1 million sq feet a day of drywall for the surrounding region. The history of pollution and existing industrial operations has made Waukegan Harbor a prime target for environmental clean-up.

Superfunds were created by legislation in 1980 to assist environmental clean-up; this legislation required companies that were accountable to pay the bill for any identified pollution. Therefore OMC spent $22 million in the early 1990's to clean the pcbs from the sediment and groundwater. This two-year project led to approximately 95% of pcb clean-up, only leaving 5% of contamination. But according to Cameron Davis of Great Lakes Alliance, "5% is still a lot of contamination." In 2002 legislation was passed, The Great Lakes Legacy Act, to remove the remaining 5% contamination through a process called dredging and it was to be a federal and local partnership and matching fund program. The federal government was willing to put forth 65% of clean up costs, $25 million, if the local stakeholders of the Waukegan Harbor put in 35% of project costs, $6 million. Removing the remaining 5% of contamination, making the Waukegan Harbor free of contamination, could have opened up "1600 acres of lakefront, valued at $800 million", according to Illinois Congressman, Mark Kirk. As of spring 2006, this project looked like a winner; however it unexpectedly fell through due the local stakeholders pulling out of the project. Susie Schreiber of the Waukegan Harbor Citizens Advisory Group stated that there was "bipartisan support and every unit was at the table." Needless to say this was disappointing for all parties involved, but the quest for clean-up still continues.

The Waukegan local stakeholders have since made an attempt to dredge the harbor removing ¼ of a million elements and decrease the depth of the harbor but this action was denied by the U.S. Army Corps because the harbor is an authorized federal navigating harbor and must keep its depth. In May 2007 a resolution was passed by aldermen who want to shut out industrial companies from the harbor criticizing these companies for their contribution of pollution; this was also denied by the federal government. Currently, there is a lawsuit pending by Waukegan stakeholders against industrial companies, but no further action has been taken regarding the Great Lakes Legacy Act. If clean-up is completed solely by the federal government, the length of time for clean-up may extend a decade longer vs. the Legacy Act proposal that had a timeframe of 3 years.