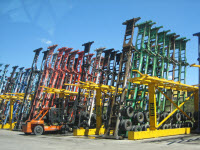 The economic success of any region depends upon the demand for its exports to purchasers outside the metropolitan area, and upon its ability to supply goods and services to its customers and to itself. This report, prepared by RCF Economic and Financial Consulting, identifies the most important export industries in metropolitan Chicago, and reports on simulation studies that indicate which of these industries have exports that have the greatest impact on the local Gross Regional Product.

The six industries identified as having the greatest local "multiplier" effect are chemicals and allied products (including Pharmaceuticals); industrial machinery and equipment; computer and other electric equipment; wholesale trade; air transportation; and finance and insurance.

A $1 Billion Increase in Export Sales Could Yield…

If you're interested in learning more about export promotion, please download the following CMAP strategy report. Comments and criticisms are encouraged.