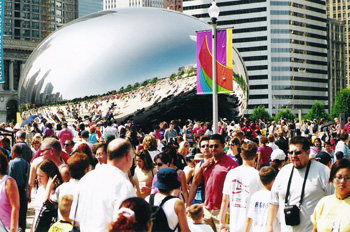 It is projected that by the year 2040 the Chicago metropolitan region will see significant demographic changes. Approximately 2.8 million people will be added through internal and external migration, and births. Approximately 30 percent of the residents will be Latino. Most likely the region will not have a majority sub-population. Close to 18 percent of the population will be seniors. These changes will affect not only the urban centers, but also the suburban communities.

To be successful in the future, we will need to be able to live and work in a highly diverse environment. But at the present time, the Chicago region is known to be one of the most segregated in the country. This strategy paper assesses the overall quality of human relations in the region, evaluating the extent to which equality of opportunity and equality of outcome exist, and provides recommendations for improving human relations in the coming decades.

Thirty-five percent of Latino youth between the ages of 16 and 24 in the Chicago metropolitan area are drop-outs (including those who dropped out before coming to the U.S.), compared to 18 percent for blacks, and 5 percent for whites.

Because of work disincentives, employment discrimination and lack of educational opportunities, more than 70% of people with disabilities in Illinois are not working and depend upon benefits, often receiving Social Security Insurance (SSI) and earning an average of $650 per month.

If you're interested in learning more about human relations, please review the following CMAP strategy report. Comments and criticism are encouraged.