Ideally, an analysis of inclusionary zoning in northeastern Illinois would measure the impacts of various ordinances that have been tailored to meet the specific characteristics of each municipality or county. For example, the projected population growth rate of a community can have a significant impact on the total amount of affordable housing produced through an IZ policy. Further, the establishment of a task force to engage various stakeholders can help to determine ordinance criteria that are appropriate for the context of a specific community.

The sample inclusionary zoning policies in this analysis were based on the most common policies in other cities, as determined through the literature review. Since the IZ policies were analyzed across the entire region, it is most appropriate to apply a policy that is neither excessive nor ineffective. The sample policies used are: 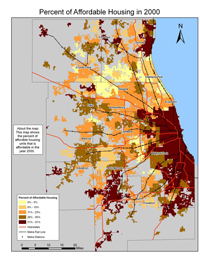 Please click the thumbnail to view a map of the percent of affordable housing units in the region in 2000.


Results of a 10% set-aside by county (aggregated from the municipality) are shown in Table 2. While Cook County would certainly experience the largest net gain in affordable units due to its proportion of households in the region, the collar counties McHenry, Kane and Will would experience a higher percentage increase in affordable units due to the higher projected growth rates. In order for an inclusionary zoning policy to create a large quantity of new affordable units, new households need to be added at a significant rate. For example, DuPage County would not realize significant increases in its affordable housing stock as compared to other counties due its relatively low growth rate and low levels of existing affordable housing units. In this instance, policy directions might address how to create more affordable housing options where new developments are not anticipated en masse.


Results for the cities with the greatest increase in affordable housing percentages are shown in Table 3. Consistent with the above discussion, the communities that would add the most affordable housing through inclusionary zoning are those where the most growth is projected to occur by 2030. 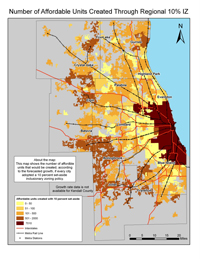 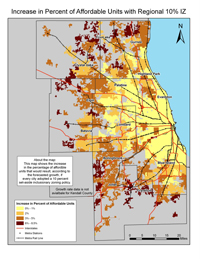 Click on the images above to open maps showing the number of affordable units by municipality created through the universal 10-percent IZ policy and the percent increase. These maps indicate that the greatest percentage increases in affordable housing would occur in high-growth communities in less-developed parts of the region, though larger communities like Chicago and Aurora would add more affordable units in total. 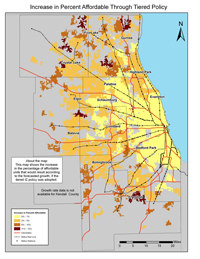 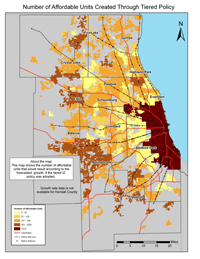