This paper will address various aspects of parks and open lands, mainly it will identify the current status of parks & open lands in the region in terms of quantity, location, type and amenities, and assess their distribution and accessibility - status quo. In addition, we will explore the impacts that the status quo has at both the local and regional levels.

For the purposes of this report, we will explore parks and open lands separately in terms of definitions respective to the region. Open lands as a topic for Northeastern Illinois has been extensively explored through a collaborative and detailed exercise which culminated in the Green Infrastructure Vision (GIV), completed in March 2004. Fig. 1 illustrates this concept as well as shows the various classifications of open space.

The Northeastern Illinois region has been experiencing a steady decline in the natural areas and forest structures which have greatly affected the ecological systems (Chicago Wilderness, 1999). These findings were the impetus behind various planning efforts which culminated with the Green Infrastructure Vision. The goal of the GIV is to provide a regional map that reflects both existing green infrastructure- forest preserve holdings, natural area sites, streams, wetlands, prairies, and woodlands- as well as opportunities for expansion, restoration and connection.

CMAP is currently working with the Chicago Wilderness coalition to integrate this vision into the GO TO 2040 Regional Comprehensive Plan. This effort will be completed by the end of June 2008. The final product will form the basis for describing open lands in the area and will recommend measures to acquire/protect/restore the identified sites. The GIV identified and mapped an interconnected network of land and water that supports biodiversity and provides habitat for diverse communities of native flora and fauna at the regional scale. These ‘resource protection areas' cover 360,000 acres of land in the northeastern Illinois region.

Parks represent one of the foremost public amenity concerns in communities across the region. Parks and managed green space often share the magnetism of good schools to young families deciding where to settle. In fact, local referenda to preserve natural areas have often passed in communities that simultaneously voted against increased funding for schools. Conversely, parks 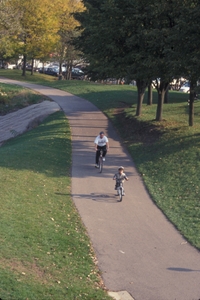 can serve as social barriers that separate one community from another. However, with good planning, diligent maintenance and equitable programming, parks have been shown to yield mostly positive effects. Through an array of studies, they have been credited with raising property values, promoting good health, binding communities, and improving the natural environment. As this region continues to grow, parks will remain at the forefront of both public and private land–use decisions. To properly implement future parks, it is important that community officials and citizens understand the components and impacts of the local parks that already exist.

In addition to the above plan, the GIV report goes into considerable detail on the location and recommended actions to protect and restore the Resource Protection Areas identified in the planning process. This will be discussed further in the Integrating the Green Infrastructure Vision into the GO TO 2040 Plan report. Tables A-C (PDF - 80 KB) depict park classification according to the National Recreation and Parks Association (NRPA). For the purposes of this analysis, these three "types" and sub-categories will be referenced periodically to illustrate the general qualities and impacts of different parks in different environments. It bears repeating that neither these types, nor the circumstances under which they are found, are universal. However, as the above standards have been adopted nationally and are used to estimate adequacy of the provision of parks and open lands, we will utilize them as standards by which to compare the state of the region.

Also, the NRPA standards should not be the only guidelines to use in determining open space needs for the CMAP region. A community needs assessment utilizing anecdotal, qualitative and quantitative techniques should be implemented by the concerned agencies to identify their local requirements. In Chicago, for example, the highest rate of parks and recreational facilities per resident are found in areas where the more than half the residents are African-American (The Chicago Reporter, 2008). However, a detailed needs assessment might reveal that these facilities are not necessarily hospitable or in as good maintenance status as other areas in the city.