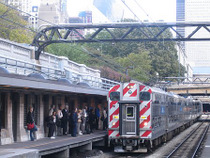 The Chicago metropolitan region has one of the nation's oldest and most extensive public transportation systems, providing over two million rides per weekday in a region of approximately eight million people. After declines in ridership through the 1980s and 1990s, system wide ridership has been steadily increasing for the past five years (RTAMS 2008). At the same time, much of the system is in need of infrastructure upgrades and improvements.

Basic repair and maintenance costs for the current system are estimated in the billions of dollars, while system expansions and enhancements would add even more expense. With 2.8 million new residents and 1.8 million new jobs projected to be added to the region by 2040, changing growth and development patterns will require new transit services to provide adequate access for the region's residents.

As the region moves forward with development of the GO TO 2040 comprehensive plan, it is important to understand the challenges facing our transit system and potential strategies to improve transit. This paper will identify and discuss broad systematic improvements such as increasing the frequency of service or expanding services into underserved areas and the impacts that these changes may have on the region.