Traditionally, public schools in northeastern Illinois were built near the students they served—within walking distance from their homes. They were compact in design and were often viewed as an integral part of the neighborhood or community. As a result, many students were able to bike or walk to school. As development pushed further and further from the urban core, this pattern of development gave way to a trend in which larger schools were often located beyond a reasonable walking or bicycling distance—particularly at the high school level. This trend is not limited to the Chicago region, but is part of a national pattern. In 1969, almost 50% of all U.S. students walked or biked to school. By 2001, that number had shrunk to less than 15% (FHWA, 2001) (Graph 1). The significant reduction in the number of students who walk or bike to school correlates with an increase in vehicle traffic and congestion contributing to air and water pollution, and carbon emissions that impact climate change (BTS). Furthermore, the reduction in physical activity is likely a major contributor to the rapid rise in youth obesity rates (ICMA). This paper will address the impacts that development of new schools, or redevelopment of older schools, has on land-use, Transportation, health, and communities. There will also be recommended courses of action that the region should consider as it plans a future to better integrate school facility planning with other types of planning—particularly land-use and Transportation. 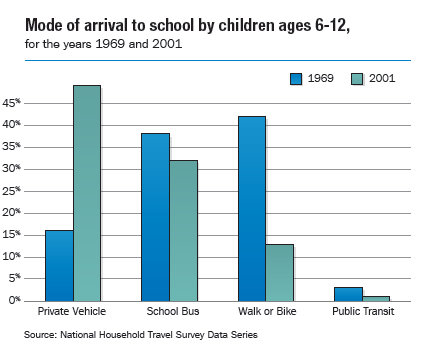