The Chicago area has been a leader in stormwater management since the 1960s when flood control and stream improvement projects were implemented. The Metropolitan Water Reclamation District of Greater Chicago (MWRDGC) was one of the first agencies to require detention storage in 1972. This same year the Tunnel and Reservoir Plan (TARP) was adopted. TARP is a series of underground tunnels and above ground reservoirs that hold stormwater runoff during large storm events to limit the number of CSOs (Metropolitan Water Reclamation District of Greater Chicago).

In 1986 and 1987 the Chicago area experienced two devastating storm events. The event of 1986 was preceded by two weeks of consistent rainfall. The event of 1987 was a single event in which 13 inches of precipitation fell in less than 24 hours. Although the two events were quite different, they both resulted in widespread flooding and record river stages (Office of Water Resources). These events spurred the General Assembly to pass Public Act 85-905 (55 ILCS 5/5-1062.2), which gave several northeastern Illinois counties the authority to create a Stormwater Management Planning Committee (SMPC) to prepare a stormwater management plan, to implement it through a countywide ordinance, and to fund stormwater management activities through a property tax levy. These counties were DuPage, Kane, Lake, McHenry and Will, and each has passed a countywide ordinance. In P.A. 94-675 (55 ILCS 5/5-1062.2) the authority was extended to Kendall and another five counties. Kendall has not yet adopted an ordinance. P.A. 93-1049 (55 ILCS 5/5-1062.1) gave the Metropolitan Water Reclamation District of Greater Chicago (MWRDGC) the authority to develop a countywide stormwater management program for Cook County. MWRDGC has completed its stormwater management plan and is now drafting the Cook County ordinance. This unique system is central to stormwater management in northeastern Illinois and allows each county to prepare its own stormwater management plan, ordinance, and projects. The ordinances are adopted by the County Board and provide minimum standards for all municipalities and unincorporated areas within the county, although a municipality may then create stricter criteria if it chooses to do so.

Other levels of government also play a role in stormwater management. On the state level, the Illinois Department of Natural Resources (IDNR) and Illinois Environmental Protection Agency (IEPA) both play significant parts. The IDNR Office of Water Resources (OWR) is the regulatory agency for any construction that occurs floodway of waterways in the State of Illinois. The agency also oversees all floodplain management, water resources planning and the National Flood Insurance Program. The IEPA is the lead agency in Illinois charged with protecting the quality of surface water and ground water. (Office of Water Resources) On the national level the USEPA is responsible for setting policies to guide the states in implementing the Clean Water Act. The US Army Corps of Engineers is the regulatory agency for all navigable waters and surrounding areas within the United States. One of the important areas the Army Corps has jurisdiction over is wetlands, although USEPA also plays a role in this. 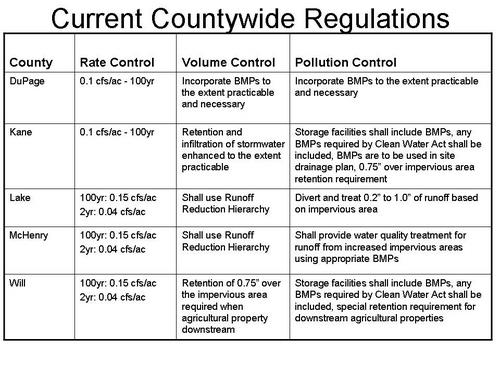