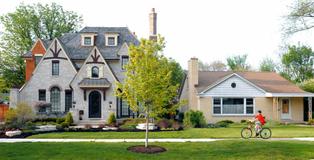 For the past several decades, a vibrant real estate market across much of the Chicago metropolitan area has fueled the demolition of single-family homes as developers make way for larger, pricier and more modern housing. "Teardowns," as these overhauled properties are often called, typically occur in older, more affluent communities where vacant lots are sparse and unimproved property is at a premium. The trend began in the late 1980s when well-heeled home buyers were attracted to the convenience and character of built-out suburbs, but wanted more design flexibility in their homes. Teardowns are still prevalent throughout the Chicago metropolitan area. Often the factors that prompt a teardown in one neighborhood will spark many more within blocks, creating a profound effect on the greater community.

The following report reports on CMAP's initial findings on the issue of teardowns. The first section seeks to define what a teardown is. The second outlines the effects teardowns have had in the Chicago metropolitan area. The most significant effects were seen in community character, local municipal costs, the environment and housing/income mix. The third section describes strategies that have been employed by municipalities and preservation groups to mitigate these effects, and includes some local case studies.