GO TO 2040 recommends improving education and workforce development by increasing collaboration and alignment between systems, filling information gaps and improving data, and reforming policy that allows for more flexibility in service delivery. The implementation of these principles requires a wide breadth of stakeholder involvement and leadership from government agencies, non-profit and civic organizations, and the business community. 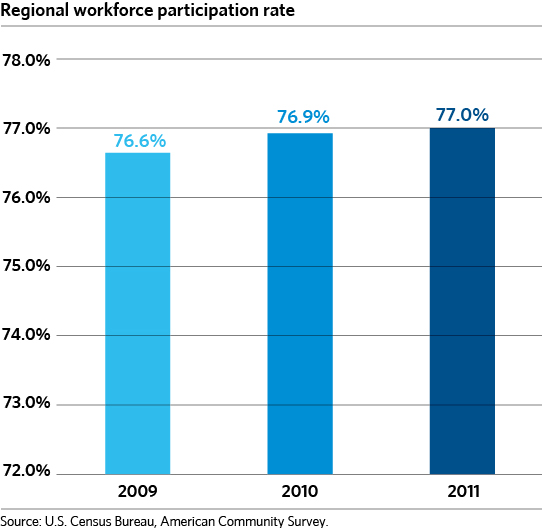 To compete in the U.S. and global economies, our region must develop, attract, and retain skilled workers, which for most industries is now more important than a region's geographic location. Over the past few years, the region's population with a high school degree or higher increased from 84.5 percent to 85.5 percent, while residents with at least a bachelor's degree increased from 33.1 to 34.9 percent.

Particular emphasis must be placed on facilitating workforce development for jobs that depend on workers who have attended community colleges, whose programs should be highly responsive to the needs of leading regional industry clusters. Industries should be actively engaged in helping to define those workforce-development programs.

GO TO 2040 recommends supporting economic innovation by improving data and information, ensuring our industry clusters thrive and provide good job opportunities, promoting commercialization of research, targeting investment decisions, and pursuing new funding opportunities, as well as cultivating a culture of innovation. GO TO 2040 emphasizes that innovation is driven by the private sector, and that the role of government should be to find ways to help spur innovation by supporting ideas, institutions, and relationships. The public sector can also play important roles in identifying and measuring innovation. Other organizations, including civic groups, foundations, and economic development agencies, can also help enhance the region's culture of innovation.

While the region enjoys a diverse mix of industries, it also realizes significant gains through its economic specializations. These "industry clusters" create high-quality jobs, spur innovation, and generate growth among numerous interconnected industries such as freight, advanced manufacturing, and biotech/biomed. GO TO 2040 calls for strategically organizing the region around its existing and emerging clusters of specialization to better compete in the national and international marketplace.

As shown in this chart, the region's manufacturing cluster began adding jobs again in 2011, reversing a downward trend begun in 2008. The freight cluster is also bouncing back after losing thousands of jobs in 2009 and 2010. 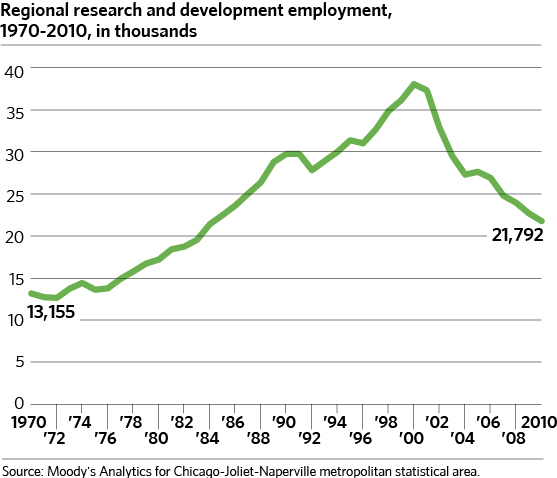 As measured by employment in the R&D sector, our region needs to step up efforts that support economic innovation. The number of R&D jobs grew steadily from 1970 to 1991, and again from 1993 to 2000. But the precipitous decline since 2001 is a troubling indicator for future regional prosperity, confirmed by decreasing venture capital and patent applications as pointed out in GO TO 2040.

With so many world-class universities and federal research facilities, metropolitan Chicago should be performing much better. The region does produce innovative technologies and methods, but not at a rate comparable to other major centers of global commerce. To support technology transfer and innovation, GO TO 2040 recommends improving data and information systems, nurturing the region's industry clusters, and targeting investments to enhance commercialization of research.