metropulse - Land Use and Housing

Achieve Greater Livability through Land Use and Housing

GO TO 2040 supports reinvesting in existing communities, pursuing opportunities for more compact, walkable, and mixed-use development, and providing a range of housing options. The implementation of these principles will vary across the region, requiring sensitivity to the unique context of each community.

Development decisions are made locally, by municipalities and counties, and local governments are the most important implementers of GO TO 2040's recommendations in this section. Yet because their actions can have significant cumulative effects on overall regional livability and economic prosperity, it is also important for local decision-makers to consider the regional implications of their choices. Regional agencies, nonprofit groups, and state and federal governments can support implementation of this recommendation by providing resources and assistance to local governments to assist with local planning. 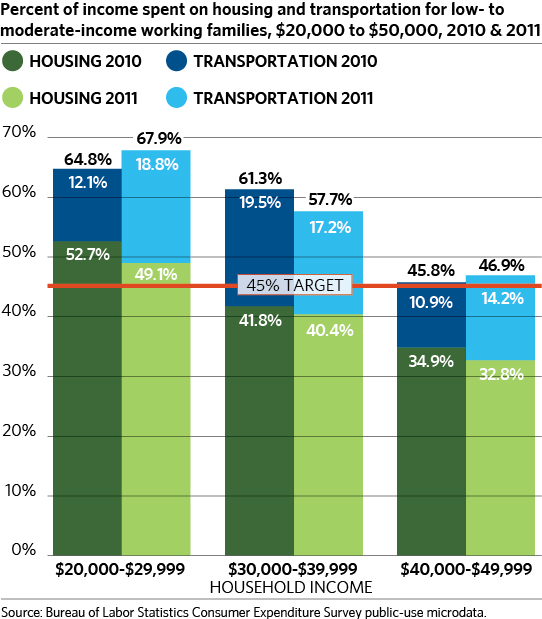 GO TO 2040 points to residents' housing and transportation expenditures as an important measure of regional economic prosperity and equity. For all income levels, the region's percentage of household income spent on housing and transportation has been declining recently, from 39.33 percent in 2009 to 37.53 percent in 2011. But lower-income households pay a much higher percentage, and the plan's goal is to reduce that to 45 percent by 2040.

This chart shows that only residents in the $30,000 to $39,000 income bracket saw their combined housing and transportation costs drop nearly four percentage points between 2010 and 2011. Households earning $20,000 to $29,000 saw these costs increase more than three percentage points.

Among other strategies to reduce the combined cost of housing and transportation, GO TO 2040 recommends that the region and its communities establish better links between the location of housing and public transit. 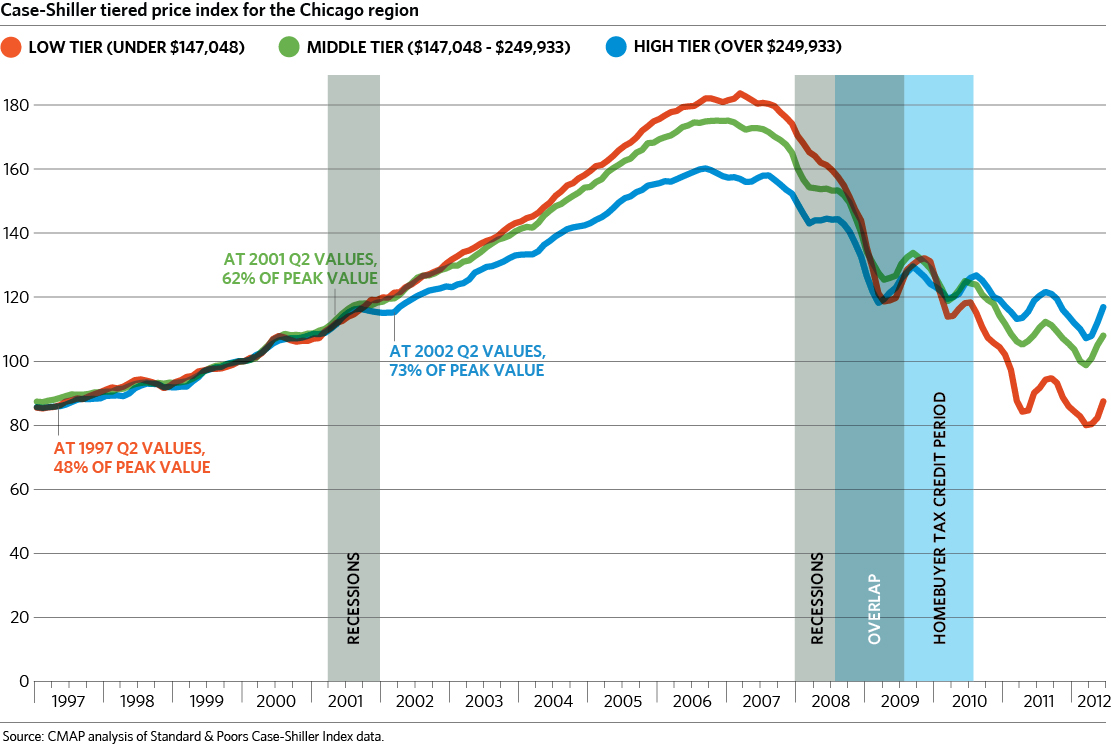 Following several years of significant declines that corresponded to the national downturn, housing in our region has begun to show gains in 2012. Closer analysis indicates that recent home value changes have not been even across all market segments. This chart shows the change in the Case-Shiller index for single-family homes in three price points. The lowest tier is the only price tier still below its 2000 base level (100), while the highest tier did not appreciate in value as much during the boom and has not fallen in value as much since the recession began.

In recent years, the housing market has posed difficult challenges for municipalities dealing with vacancies and foreclosures. Homes for a Changing Region -- a partnership of CMAP, the Metropolitan Mayors Caucus, and the Metropolitan Planning Council -- provides technical assistance for municipal leaders to develop housing strategies by charting future demand and supply trends 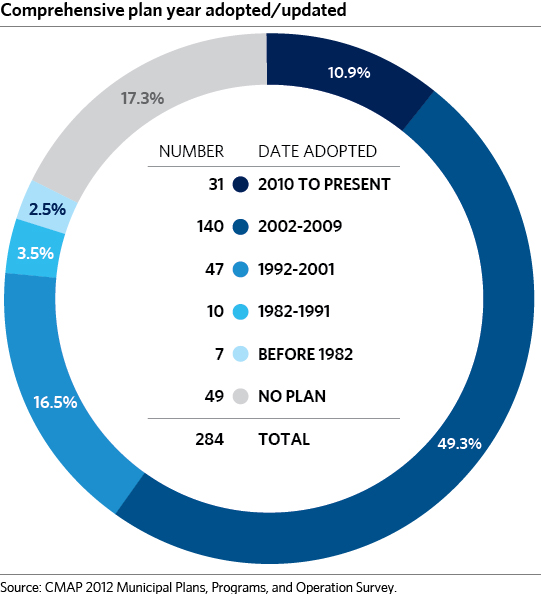 An effective measure of local long-range planning is the extent to which communities across the region have an up-to-date municipal comprehensive plan. In 2010 and 2012, CMAP surveyed municipalities to better understand their local plans, policies, or programs. Among many other metrics, they were asked to confirm the status of their local comprehensive plan. As shown in the chart (based on the 2012 survey), 71 percent of the region's 284 municipalities have adopted new or updated plans in the past decade. That includes 32 municipalities that produced new or updated plans from 2010-12.

Many of those communities have benefited from the CMAP Local Technical Assistance (LTA) program. Now beginning its second year, LTA is helping 70 local governments, nonprofits, and intergovernmental organizations to address community issues at the intersection of transportation, land use, and housing, including the natural environment, economic growth, and community development.

The conservation of energy and water is a top priority for GO TO 2040, as these resources will likely become more constrained in the future. By focusing on resource conservation, our region's businesses, local governments, and residents can avoid future price spikes while saving money in the medium term.

Water and energy conservation brings economic and environmental benefits, and steps can be taken now to give northeastern Illinois opportunities to prosper in a new, greener economy. Furthermore, the more efficient use of energy and water resources will help the region reduce emissions of greenhouse gases, which contribute to climate change. 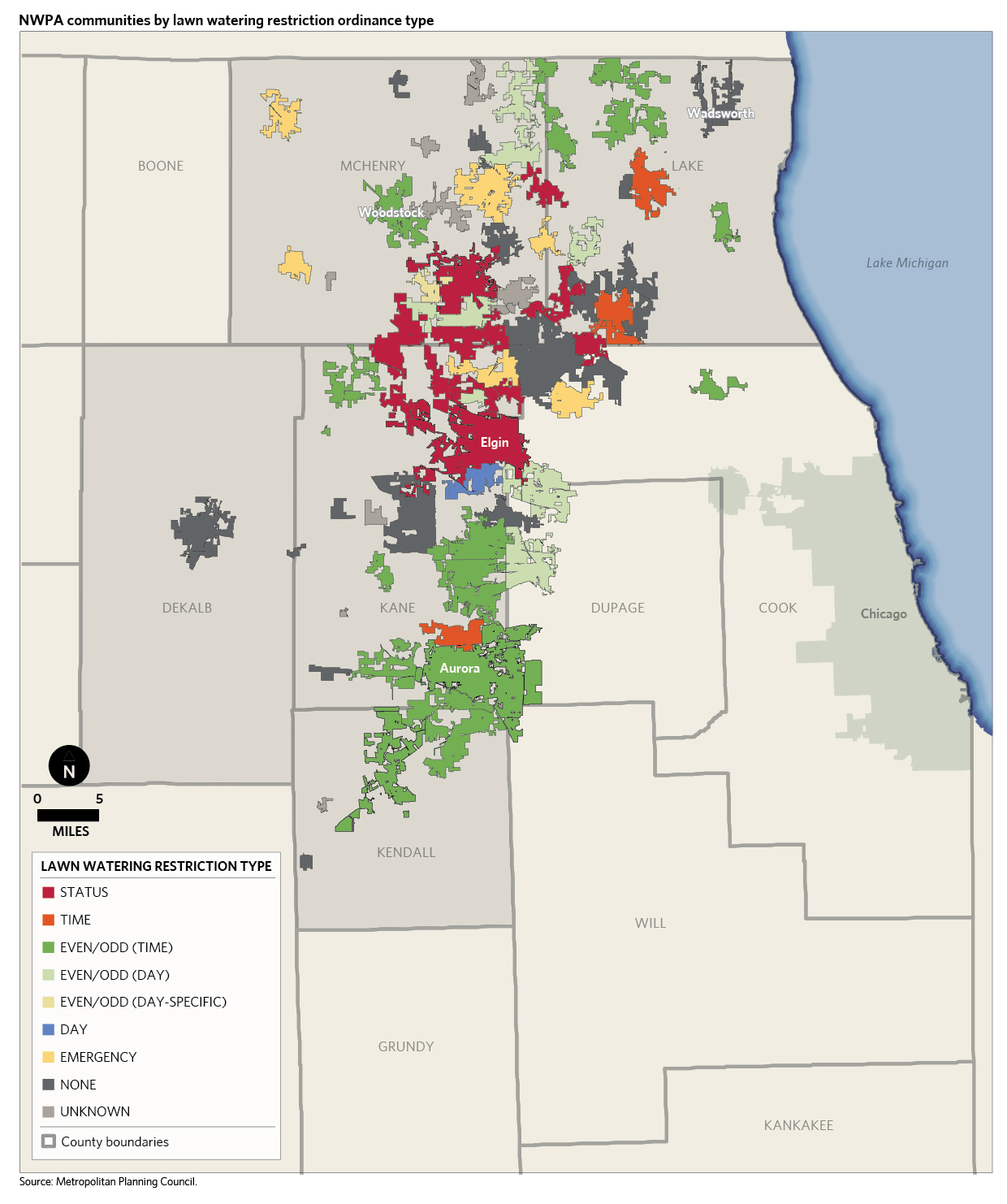 The Northwest Water Planning Allianceis a partnership of municipalities mostly in the Fox River valley, but elsewhere in the western and northwestern part of the region as well, that do not use Lake Michigan for drinking water. As research done by the Metropolitan Planning Council shows, NWPA municipalities have varying policies for water conservation, represented here by restrictions on lawn watering. To achieve better, more-consistent outcomes, NWPA is working with these municipalities to adopt a model ordinance for water conservation. As a result, this map's multicolors will become more uniform over time. 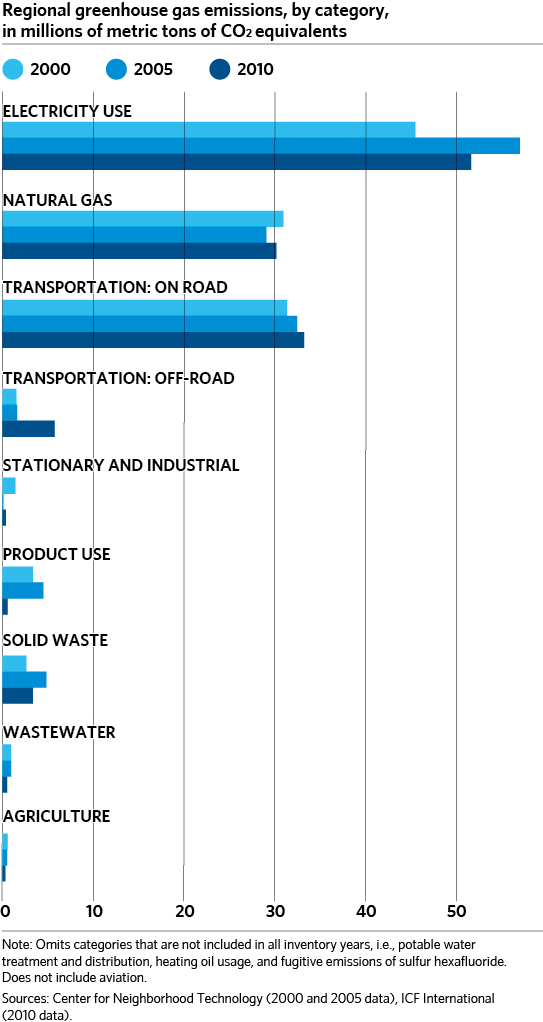 Although energy use is not the only source of greenhouse gas emissions (GHG), progress in reducing GHG emissions is an effective measure of regional energy consumption and conservation. This graphic shows that electricity consumption is by far the largest source of GHGs, though that amount has decreased from 2005 to 2010. The reason is both that consumption declined and that power sources became "cleaner." Natural gas consumption also decreased during the same period, but the GHG estimate is higher because of other factors. The region's overall emissions have decreased from 131 million metric tons in 2005 to 126 million in 2010.

While implementing GO TO 2040 recommendations regarding transit investments, compact development, and energy use in buildings will positively influence GHG emissions, the plan points out that more-significant reductions will require broader, federal action to address carbon content of fuels, industrial emissions, and other sources.

GO TO 2040 recommends making significant, criteria-based investments in parks and open space to improve access to parks in developed areas, to protect the most important natural areas, and to connect open spaces together through greenways.

Major benefits will follow from this, including enhanced quality of life and property values, improved public health through the promotion of active lifestyles, and the protection of ecosystem services like water supply, flood storage, and water purification. Our network of parks and natural areas is considered part of our region's "green" infrastructure because of its similarity to the "gray" infrastructure networks that are likewise central to prosperity and livability. Like other forms of infrastructure, it can be managed, restored, and expanded. A top GO TO 2040 priority is to expand the green infrastructure network.

GO TO 2040 recommends improving the region's system of parks and open space to provide for recreation, protect ecosystems, and conserve natural resources. Each county in the region is making strides to increase protected acreage, which has grown overall from 99,188 acres in 1990 to 189,523 in 2012. In this past year, Kane County added 530 protected acres, followed by Lake with 352, Cook with 172, and Will with 195. 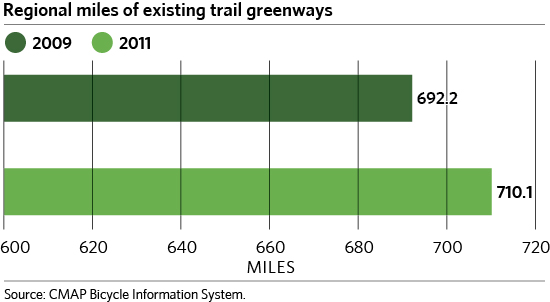 Greenway trails provide functional connections between parks and preserves, using the green infrastructure network as a design concept. The overall regional total of greenway miles has increased from 692.2 in 2009 to 710.1 in 2011. GO TO 2040 set a goal of doubling greenway trails to 1,348 miles by 2040.

GO TO 2040 recommends eliminating the region's food deserts, increasing local food production and processing, and increasing data and research to support informed investments in sustainable local food. The benefits of local food are numerous and include positive effects on a community's quality of life, health, the environment, and the economy.

As the region's population grows, public policies that influence how food is grown, processed, and transported in our region will affect many other areas addressed in GO TO 2040, especially land use and transportation. The implementation of these principles will vary across the region as local food production can refer to a variety of options from backyard and community gardens to commercial farms and combinations in between. 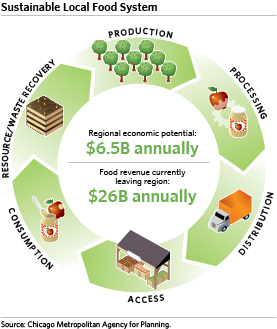 GO TO 2040 recommends support by the region and its communities for local food systems, which hold significant potential for economic development and quality of life. Over the last ten years, regional demand for local food has grown 260 percent, and recent surveys show that three-quarters of Americans care that their food is grown locally. Despite the significant increase in demand, $26 billion in food revenue leaves our region every year. By increasing local food production, metropolitan Chicago could create over 5,000 jobs and generate $6.5 billion a year in economic activity. 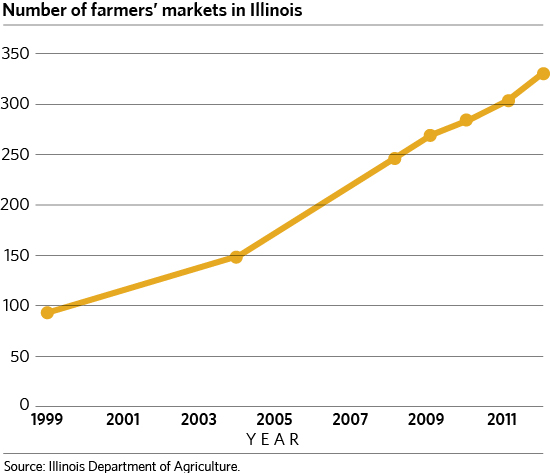 To help implement this recommendation, CMAP created a microsite at www.cmap.illinois.gov/food with a variety of resources to help elected officials, planners, and economic development professionals strengthen local food systems in their communities. One indication that local food has gained a strong foothold is the number of farmers' markets. Throughout Illinois, they have climbed steadily since 1999, reaching a high of 326 in 2012.