Update: The planning priorities report was completed in May 2014.

The Village of Worth sought technical assistance for a variety of planning projects to improve the built environment and capitalize on the Village's recent creation of an Economic Development Committee. CMAP partnered with the Village of Worth to create a "planning priorities report" to assess the opportunities, assets, and needs in Worth and help determine what type of planning project would be most important for the Village to undertake next. The Planning Priorities Report helps set the stage for Worth's energetic administration and stakeholders to pursue future plans and projects.

To develop the report, CMAP staff first examined many data sources to better understand the community's demographics, economic health, and transportation system. The research included a thorough review of past plans, maps, and other planning documents that gave context to our current assessment and recommendations.

Extensive conversations with Worth's Village President, Trustees, and members of the Economic Development Committee—along with Village staff, residents, and other community stakeholders —were especially influential in the report's analysis. Stakeholders shared diverse and candid perspectives on Worth's current conditions and needs, as well as visions for its future.

Despite a variety of backgrounds and opinions, several common themes emerged that greatly informed the recommendations in the final report. Many stakeholders expressed a desire to fill vacant storefronts along 111thStreet and Harlem Avenue, as well as improve the experience of walking and shopping along these two major thoroughfares. Several residents and village staff described the lack of physical and economic connections between the Metra station and the Village's commercial districts; while the station serves hundreds of daily commuters, they mostly drive alone from outside of Worth and leave without patronizing local businesses.

The main recommendation of the final report was that the Village should partner with relevant agencies to create a transit-oriented development (TOD) plan for the area surrounding the Worth Metra station. The presence of the Metra station is a tremendous asset that brings hundreds of people to the Village on a daily basis. Developing a well-planned, mixed-use district that capitalizes on the Metra station's central location can be a catalytic project for the Village, enlivening the existing retail districts along Harlem Avenue and 111th Street.

Immediately following up on the report's main recommendation, in June 2014 the Village applied to the RTA Community Planning program for assistance to pursue a TOD plan for the Metra station area. 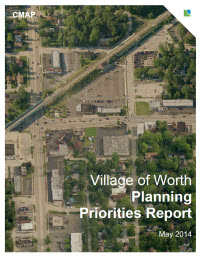