GO TO 2040 recommends a comprehensive evaluation of a series of potential reforms to the state and local tax structure. In northeastern Illinois, tax policies frequently distort land use decisions rather than allow markets or quality-of-life factor to guide them. Tax rates are often set very high, and the tax base is overly narrow rather than broad, which further stifles economic competitiveness. A "broad tax base" is one with few exemptions or limitations among different businesses, services, or properties. This Policy Update will explore the state sales tax in Illinois, the changing consumption patterns in the U.S., as well as several implications of broadening the sales tax base to include some services.

In northeastern Illinois, the sales tax base is narrow, covering tangible goods but only a small number of services, while sales tax rates are often set very high (10 percent in some local jurisdictions). Moreover, the service sector of the economy accounts for a much larger proportion of both consumer spending and production than it did 80 years ago, when sales tax policies were institutionalized. The tax system should move closer to reflecting economic realities, while also taking care to avoid economic distortions that might result from including certain types of previously untaxed business activity. Extending the sales tax to certain services may also allow the sales tax rate to be lowered, which could also reduce economic distortions.

A Brief History of the Sales Tax

Taxation of sales became a popular tool in the U.S. during the Great Depression in response to declining property tax revenues and increasing spending pressures, according to a report from the National Conference of State Legislatures. Illinois first adopted a two-percent state sales tax in 1933. During the time that most of these taxes were enacted, the U.S. economy was driven by goods. The statewide Illinois sales tax, currently set at 6.25 percent, primarily applies to tangible personal property. Most tangible goods are subject to the tax under the Retailers' Occupation Tax, Use Tax, Service Occupation Tax, and Service Use Tax, as are select services including prepaid telephone cards, photo processing, and canned software or modifications to canned software. Fourteen other services are subject to statewide sales taxes at different rates -- the State imposes a six-percent tax on 94 percent of gross receipts of short-term hotel and motel rentals, and automobile rentals are also subject to a separate statewide tax of 5 percent. Six telecommunication services are also taxed under the Telecommunications Excise Tax Act at a rate of 7 percent. An additional six utility services are taxed under the Gas Revenue Tax Act and the Electricity Excise Tax Law at various rates.

Since the sales tax was enacted, changes in the U.S. economy have resulted in increased consumer income and a shift in demand toward services. Between 1929 and 2010, the U.S. transitioned from an economy based on manufacturing and other goods-producing industries to a services and information-based economy. With this transition came cheaper and more efficiently manufactured goods from within the country and overseas, rising standards of living, and increased disposable income, resulting in increased demand for services. Since the early 1970s, spending on services has exceeded spending on goods. In 2010, consumers spent twice as much on services (66.9 percent of total personal consumption expenditures) as on goods (33.1 percent of total personal consumption expenditures). This shift in the fundamentals of the economy has changed the relationship between consumption and tax revenue. 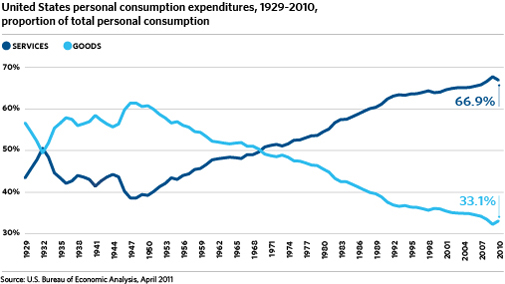 Implications of Broadening the Sales Tax Base

Efficiency of the Tax System

An efficient tax system minimizes economic distortions by having a broad, rather than narrow, tax base. The result is that similar households and businesses are taxed in similar ways. By taxing the consumption of goods but not services, the sales tax is not taxing the consumption of resources, but rather the type of product consumed. The tax system would be exerting less influence over consumer choice by taxing both goods and services. For example, under the current system, a person can get upholstery cleaning services tax-free, but must pay a tax to buy upholstery cleaning equipment. In addition, a National Tax Journal paper indicates that there is some evidence that the focus on taxing goods may have been contributed to growth in service consumption and to decline in retail goods consumption. This would constitute an "economic distortion," where the tax system itself is influencing economic activity.

The existing sales tax on goods is highly regressive. Lower-income taxpayers typically spend a higher percentage of their incomes on tangible goods than higher-income people. According to the Institute of Taxation and Economic Policy's "Who Pays?" report, the poorest 20 percent of Illinois taxpayers paid 3.5 percent of their income in sales taxes, while taxpayers in the top 1 percent paid 0.5 percent of their income in sales taxes. Furthermore, some services are consumed more often by higher income people than by lower income taxpayers. It is possible that including some of these services in the sales tax base may help to lessen the regressive nature of the sales tax.

In general, research indicates (see here, here, and here) that a larger and more diverse tax base may bring more year-to-year stability to sales tax revenues. In addition, consumption of services accounts for the majority of personal expenditures. Therefore, including additional services in the sales tax base may also reduce long-term volatility from changes in consumption patterns.

While taxing services may increase equity, it may also exacerbate existing problems with taxes on consumption. Under the current system, when a business, such as a retail store, pays a sales tax on a business input, like a cash register or cleaning supplies, the business will pass the cost of this tax on to the customer. When the customer pays a sales tax on their purchase, the result is a tax on a tax, or "cascading taxes." If additional business inputs, such as advertising services, were added to the sales tax base, the cascading nature of the sales tax would be amplified.

This is most problematic with taxing industries that primarily sell services to other businesses, because the tax would be imposed on business inputs rather than consumption. There are several ways to limit cascading taxes. Businesses-to-business transactions could be exempted from the sales tax. Alternatively, services that are primarily purchased by other businesses could be excluded from the expansion. Also, lowering the sales tax rate for both goods and services helps to mitigate the effects of cascading taxes.

The sales tax base in Illinois covers tangible goods but only a few services, which make up a larger and growing portion of the economy. Expanding the sales tax base to include some types of industries in the service sector would allow lower sales tax rates without reducing overall revenue. In addition, broadening the base would also enhance revenue stability and reduce the economically distortive nature of the current sales tax.