On December 3, 2015, the U.S. Census Bureau released its 2010-2014 American Community Survey (ACS) 5-year estimates.  The ACS collects information such as ancestry, educational attainment, income, employment, and housing characteristics and makes this data available at multiple geographic levels, including municipality and township.  This release of the ACS marks the first time that users and analysts are able to compare two non-overlapping 5-year ACS datasets (2005-2009 and 2010-2014), and the first time that many of the region's smaller communities will be able to see this change for their jurisdictions.  This Policy Update is part of a series that uses the most recent ACS data to examine broad trends in the CMAP region.

In northeastern Illinois, household income growth has not kept pace with overall inflation and has been unevenly distributed across the region.  Understanding these patterns can help decision makers address quality-of-life, economic development, and fiscal issues.  The U.S. Census Bureau's ACS 2010-2014 estimates are weighted rolling averages of 5-year periods.  All references in the text to 2009 and 2014 are 2005-2009 or 2010-2014 ACS estimates, respectively.

To help decision makers assess changes in household income in the region and to update prior analysis, this Policy Update compares the most recent ACS estimates with data from the 2005-2009 ACS estimates.  Assessing changes in median household income between the 2005-2009 ACS and the 2010-2014 ACS is one way to look at income trends in the region.  The data indicates that median incomes are increasing in most of the region, but typically at a slower rate than the nation.

Between 2009-2014, change in median household income (MHI) by county ranged from a decrease of 1.3 percent to an increase of 5.5 percent.  At the same time, MHI grew 4 percent nationwide, while inflation was 10.3 percent.  This means that household income growth lagged the increasing cost of goods and services. During the periods surveyed by the ACS, which include 2005 through 2014, economic cycles greatly affected income levels. The economic recession that began in December 2007 did not affect incomes until the latter half of the 2005-2009 ACS survey period.  Although the recession officially ended in June 2009, unemployment in the region has remained high, likely leading to lower income growth between 2010-2014.

Many of the areas with declines are in the outer ring and southern suburbs of the region.  The following map illustrates which county subdivisions experienced MHI growth and which experienced declines between 2009 and 2014. 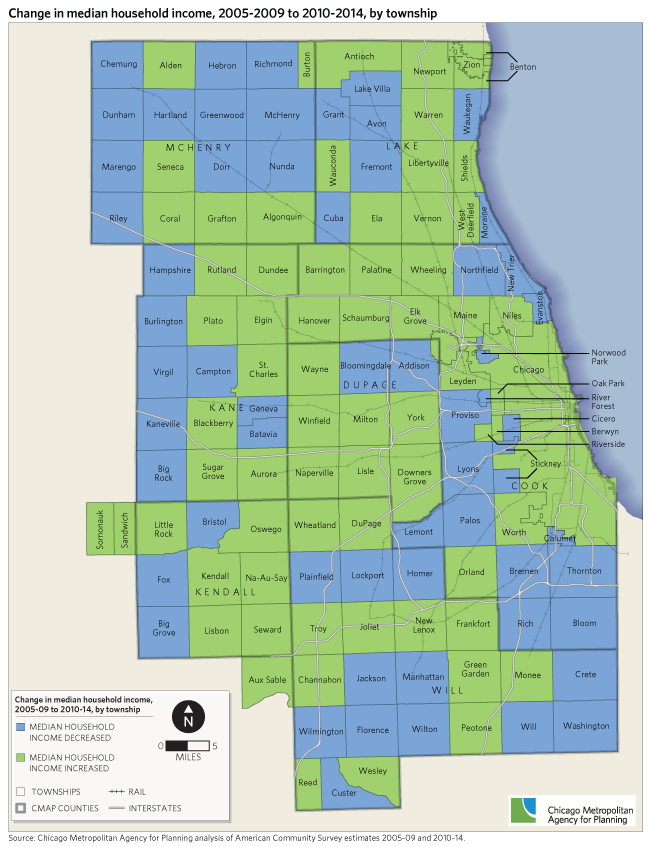 It is clear that household incomes in many parts of northeastern Illinois are falling behind the rest of the region, as well as the rest of the U.S.  This has broad implications for the region's economic status as well as for local planning initiatives.  Income growth that does not meet national trends may reflect the region's overall slower rate of overall recovery from the recession, or it may indicate a change in the types of industries that are hiring here.  CMAP analysis indicates that income growth in some peer regions is lagging similarly.  Understanding overall income trends can help the region's economic development entities, municipalities, and other stakeholders plan for initiatives that improve economic health across all seven counties.  In addition, when declining incomes are concentrated in a particular area, it can discourage economic development where it is needed most.  The region is beginning work on its next comprehensive long-range plan, including the examination of strategies to promote inclusive economic growth that supports access to opportunity for all of the region's residents.  In addition, CMAP will continue to analyze socioeconomic conditions with the goal of making our region and communities more livable and resilient.