As development in metropolitan Chicago has expanded outward from the urban core in recent decades, average commute times and distances for all workers have increased. Small annual increases in commute time and distance add up. Paired with the compounding effects of congestion, time spent in traffic has grown from 18 hours per year per commuter in 1981 to 71 hours per year in 2012.
Research indicates that long commutes, especially long automotive commutes, have negative impacts on worker health and well-being. Moreover, when workers have longer commutes, employers may experience decreased productivity, increased absenteeism and turnover, and limited labor pool options. Workers may also face less access to job opportunities, decreased personal time, and economic stresses due to long commutes and increased transportation costs.
For workers and employers, a reliable transportation system matters -- without such reliability, both workers and freight face unpredictable travel times and may be frequently delayed.  Long commute times or distances between jobs and housing can be a particular challenge for low-income workers, who are less likely to own cars and may have trouble affording housing close to their place of work or near sufficient public transit.  GO TO 2040 recognizes this link and emphasizes the importance of accounting for the combined cost of housing and the transportation in assessing overall affordability.

Changing residential, commercial, and industrial development patterns may have contributed to small fluctuations in the distance and time the region's residents travel for work.  Over the past several decades, the region has cultivated new employment nodes as well as significant residential development, particularly in Will and Kane counties.

Shifts in the region's longest commutes

With a changing employment landscape, some of the region's commuters are traveling longer times and distances to get to work.  Nearly 40,000 freight and manufacturing workers and over 80,000 workers in the "all other jobs" category travel 90 or more minutes to work one way, spending at least 10 more hours commuting per week than the average commuter in the CMAP region.  These workers spend the equivalent of almost 21 entire days commuting over the course of one year.

Between 2003-13, the percentage of manufacturing workers with long commutes, defined as driving over 90 minutes and commutes more than 60 miles, decreased, while the region's longest commutes increased for freight and all other workers.  These commute trends may be partially attributed to merging patterns in locations of residence and employment for manufacturing workers.  Conversely, freight commute patterns may indicate that an increasing share of freight workers are living farther away from their jobs and spending more of their time commuting compared to ten years prior.

Changing location of workplaces and residences

While freight employment occurs throughout the region, freight jobs are becoming increasingly concentrated along major transportation corridors in the City of Chicago, and the counties of Cook, DuPage, and Will -- areas with high access to highways, airports, and rail.  Areas of the region with longstanding freight employment concentrations, including communities adjacent to O'Hare Airport and Chicago's Loop, have also experienced growth in freight jobs from 2003-13.
As mapped below, patterns of freight employment may be explained by the growth in large logistics and distribution hubs, which allow for modern methods of inventory management and distribution.  These findings align with prior CMAP analysis regarding the most concentrated location of the region's freight and manufacturing workers. 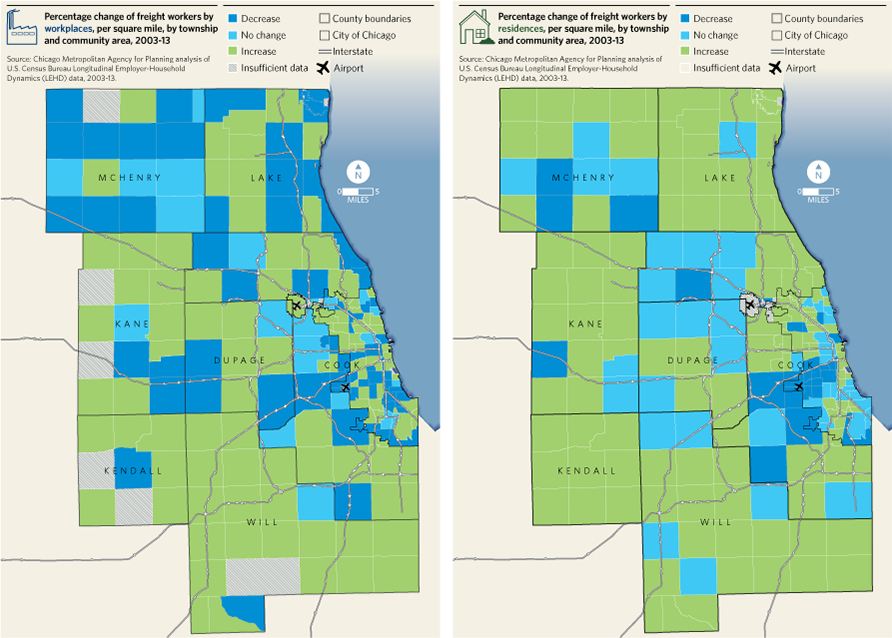 The number of freight workers by place of residence has increased substantially throughout the region.  Will County in particular has seen growth in residents employed in the freight industry, paralleling the increase in freight employment in this area. Community areas on Chicago's southwest side and municipalities in southwest suburban Cook County adjacent to Midway Airport have experienced a decrease in residents employed in the freight industry.
Commute time and distance for freight workers have increased slightly from 2003-13, mirroring commute patterns for all other jobs in the region.  Over the same period, the freight industry employment grew 11 percent. 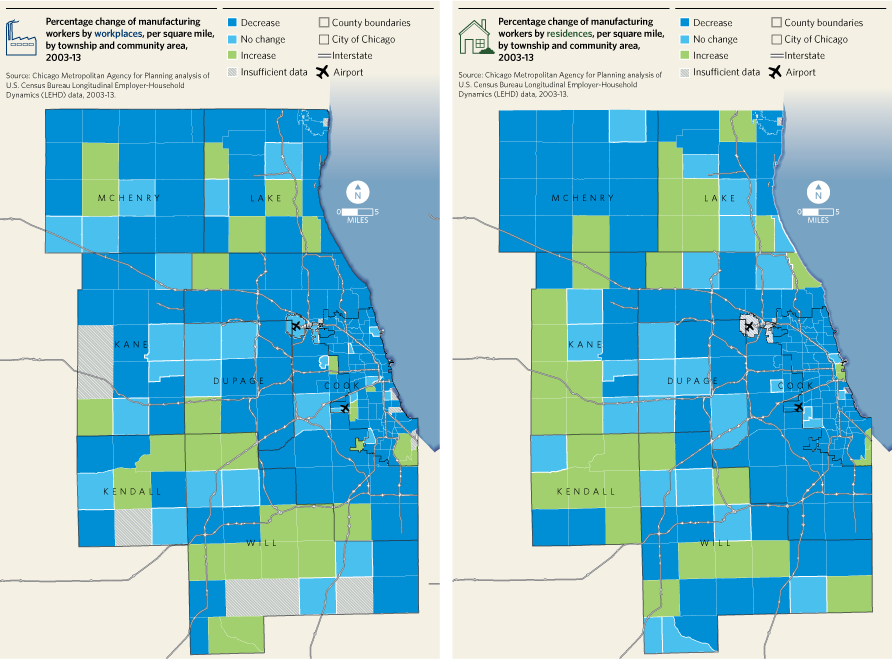 As GO TO 2040 indicates, during the last several decades, metropolitan Chicago's population has shifted outward from the region's core.  Despite this movement, commute time and distance for the region's freight and manufacturing workers changed minimally between 2003-13.  Targeting future freight and manufacturing development toward already-developed areas can leverage existing transportation and infrastructure assets and also better connect jobs to where workers reside.
However, larger issues that affect commuting, such as land use, transportation, and congestion, may hinder regional economic growth due to decreased mobility over time.  Congestion not only directly affects the freight and manufacturing clusters by increasing costs for firms and reducing reliability for shipments, it also hampers the access and productivity of its workforce. GO TO 2040 recommends strategies to address the mismatch of jobs to housing, such as reinvesting in existing areas, moderately increasing density near transit, investing in transit facilities, and promoting a well-balanced housing supply.  These efforts help improve our economy and quality of life by giving people more choices for getting around, working, and living.
CMAP - Chicago Metro Agency of Planning
Navigation