In January 2015, CMAP launched an interactive mobility data visualization website that allows users to explore metropolitan Chicago's regional system of roads, transit, and freight, which are not being adequately maintained.  Resources to upgrade these assets are more scarce and precious than ever.  This is the third in a series of Policy Updates that highlights CMAP efforts to address the region's mobility needs for greater economic prosperity and quality of life.  This piece focuses on the Chicago Region Environmental and Transportation Efficiency (CREATE) program.

The Chicago region is a key rail hub for the U.S., providing transportation options and access to markets for the region's businesses.  The CMAP Freight Drill Down report further describes the economic impacts of the region's freight system, along with the CMAP Freight-Manufacturing Nexus report highlighting the unique connection between the freight system and local manufacturing industries.  But the scale of rail activity in the region, coupled with older infrastructure, causes congestion and other quality-of-life impacts for many communities.  The CREATE program is designed to untangle the knot of rail infrastructure in northeastern Illinois.  This Policy Update provides more background information on the CREATE program, including its project portfolio, implementation status, and performance impacts.

CREATE is a public-private partnership between freight railroads, the U.S. Department of Transportation (U.S. DOT), the Illinois Department of Transportation (IDOT), the City of Chicago, Metra, and Amtrak.  First announced in 2003 after several years of study, the CREATE program today consists of 70 projects spanning a range of rail infrastructure improvements.  These projects are organized into four corridors -- the Passenger Corridor, East-West Corridor, Beltway Corridor, and Western Avenue Corridor -- along with tower projects and highway-rail grade separation projects.  The CREATE program also includes operational improvements and a local viaduct improvement program in Chicago.

The Chicago area is the primary interchange between eastern and western railroads in North America.  Some of the nation's busiest transcontinental rail lines terminate here, bringing high traffic volumes to the region.  These "transcon" routes are tied together by smaller "belt" railroads within the region, allowing for transfers between the major railroads.  Together with intermodal transfers to trucks (as tracked by CMAP's Regional Economic Indicators), the region's freight infrastructure gives shippers access to major markets throughout North America.  One goal of CREATE is to provide additional rail capacity to accommodate the heavy traffic volumes, as well as improve connections between rail lines.

Additionally, there is substantial conflict between freight and passenger rail in the Chicago region, particularly to the south and west of the city.  Passenger trains tend to move from the edge of the region toward the center, while freight trains tend to move from the southeast to the west or northwest, across the passenger flows.  Passenger rail is entitled to operational priority, but this reduces freight speeds at locations where passenger and freight lines cross or share tracks.  In addition, unplanned interference with freight trains can reduce on-time performance for passenger services.  Another goal of CREATE is to reduce these conflicts to the mutual benefit of freight and passenger operations.

Rail operations can affect the functioning of the highway system as well.  Busy rail corridors can cause frequent delays for motorists at highway-rail grade crossings.  These delays can be particularly long just outside rail yards, where freight trains often back up waiting for access to crowded terminals.  The projects in the CREATE program can address these issues by improving access to rail yards and, in some cases, separating highway-rail traffic at grade crossings. 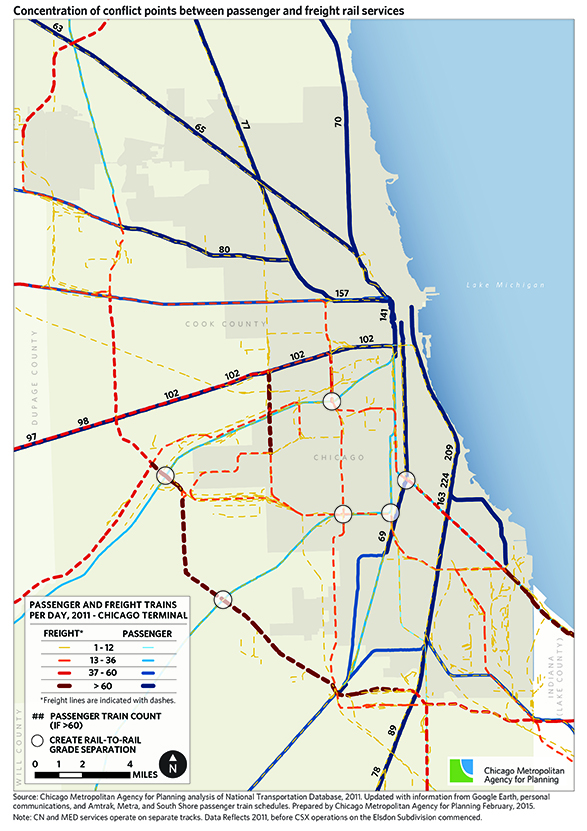 The CREATE projects completed to date have already made a significant impact on the performance of the transportation system.  A recent study commissioned by the CREATE partners estimates a reduction from 48 hours to 32 hours for an intermodal or manifest train to pass through the terminal; the reduction is from 20 hours to less than 15 hours for unit trains.  Intermodal trains carry containers or trailers, manifest trains carry a mix of railcars, and unit trains carry bulk commodities like coal or grain.  The same study estimates CREATE's total economic impacts to date at $28.3 billion, including benefits from reduced travel times, fuel savings, and safety improvements, among others.  A recording of a presentation on the study's results is available.

CREATE's full benefits will be achieved when the program is complete, but each project has independent benefits.  To illustrate, the Englewood Flyover opened to traffic in late 2014.  This project provided a new railroad bridge to carry Metra's Rock Island District trains over a line used by Amtrak and freight rail.  Doing so removed a point of conflict between nearly 80 Metra trains and about 60 freight and Amtrak trains, reducing delays for both passenger and freight users.

Another example, the 75th St. Corridor Improvement Project, is still under study and will provide benefits to freight and passenger rail networks. The project is a combination of four CREATE projects and is the most complex remaining component of the program.  It will reconfigure a series of rail crossings on Chicago's south side and provide additional track capacity in the area, affecting over 120 trains each day.  The project will separate Metra's SouthWest Service from freight rail lines, reducing a point of conflict.  Additionally, the SouthWest Service will be rerouted from Union Station to LaSalle Street Station, freeing up capacity for additional service at the region's busiest passenger rail station.  These improvements to the SouthWest Service are included in GO TO 2040 as a fiscally constrained major capital project.

CMAP's interactive mobility visualization website tracks the status of the CREATE projects.  As of February 2015, 22 projects have been completed, and an additional ten are under construction.  Eighteen projects are in various design stages, and the remaining 20 projects will begin upon identification of funding resources.  The Belt Corridor is almost completed, and much progress has also been made on the Western Avenue Corridor.  Completing the Passenger Corridor projects and grade separations remains a high priority.

The CREATE program is estimated to cost over $3.8 billion, of which about $1.2 billion has been committed to date.  The public sector has provided the majority of this funding, in particular U.S. DOT and IDOT.  The federal government has contributed over $330 million, the state government has contributed $410 million, the private railroads have contributed $234 million, and the remainder has come from various sources, including local government and pre-CREATE sources.  Significant additional funding is needed for projects with direct benefits to the public via improved passenger rail service and reduced delay for motorists.  As freight volumes pick up, in part facilitated by the implementation of CREATE, it will be important to fund publicly oriented projects, minimizing the impact of increased volumes.

Indeed, the region's rail network provides a mix of public benefits to commuters, consumers, and communities and private benefits to railroads and their clients.  Further, the CREATE program provides benefits across multiple scales, from local communities to regional highway and transit users to national and global supply chains.  CREATE's funding structure must strike a balance between public and private investment commensurate with the level of benefit received by each, also balancing federal, state, and local sources.

GO TO 2040 calls for the implementation of the CREATE program as a key step in promoting a more efficient regional freight network.  More specifically, the plan calls on the region to build a larger national coalition to support the CREATE program and secure funding for its completion.  A national effort would support Chicago's role as a hub of nation's rail network, with connections to six of the nation's seven Class I railroads.  The region's confluence of rail, truck, and air infrastructure make it a critical shipping node for North American freight.

Today, the CREATE program needs more than $2 billion in funding, nearly half of which would go to constructing the 75th Street Corridor Improvement Project.  CMAP's work in federal freight policy emphasizes the importance of key nodes in the national freight system, and the need for federal funding commensurate with their impact.  Additional federal funding is certainly critical, but other funding sources will be needed to bring the CREATE program to completion.

After more than a decade since its inception, many CREATE projects have been implemented.  Rail operations within the region have improved.  CREATE goes a long way toward assuring that the regional rail system has the capacity to handle passenger and freight traffic well into the future, as well as mitigate impacts on local communities.