Evaluating Housing and Transportation Costs in the CMAP Region
During the last several decades, metropolitan Chicago's population has shifted outward from the region's core to predominantly lower-density, auto-dependent areas, and employment centers have dispersed throughout the region. This creates in an imbalance between where jobs are located and where people live, and more particularly where affordable housing is located in relation to job centers. While many factors drive these decisions, the region's current disparity between where residents work and live hinders transit access, increases household costs related to transportation, and contributes to traffic congestion in the region.
Housing and transportation costs are the two largest expenditures for most households, and combining them provides a more complete measure of the true cost of housing. Moderate- and low-income residents of the region spent an average of 57 percent of their income on housing and transportation costs in 2012, according to the draft GO TO 2040 update appendix on indicators that measure the plan's implementation. By 2040, the region's comprehensive plan seeks to reduce this number to 45 percent. In addition, CMAP analysis indicates that affordable housing is located far from major job centers and often has poor transit connections. While housing prices may fall in lower-density areas that are far from transit, the transportation costs of living in these areas are considerably higher. Understanding combined transportation and housing cost patterns in the region can help the region's local governments plan for livability.

While one GO TO 2040 indicator tracks housing and transportation affordability for the region as a whole, additional data sources provide insight into how these costs vary throughout the region. This Update examines housing and transportation costs and job access in metropolitan Chicago using the U.S. Department of Housing and Urban Development's Location Affordability Index (LAI), which uses U.S. Census American Community Survey data from 2006-10. The LAI estimates the percentage of income prototypical household types would spend on housing and transportation to locate in each U.S. Census block group in the region. The LAI delineates eight household profiles of varying incomes, family sizes, and number of commuters because affordability differs for each household type. This Update uses the LAI's Regional Typical and Low-Income household profiles, detailed in the following table.

Source: U.S. Department of Housing and Urban Development Location Affordability Index.
Note: Income is the Area Median Income (AMI) as defined by the LAI. Low-income is 50 percent of the AMI. The LAI defines the region as the metropolitan statistical area (MSA). The Chicago-Naperville-Elgin, IL-IN-WI MSA is a 14-county area that includes all of the CMAP region, plus parts of Indiana and Wisconsin. 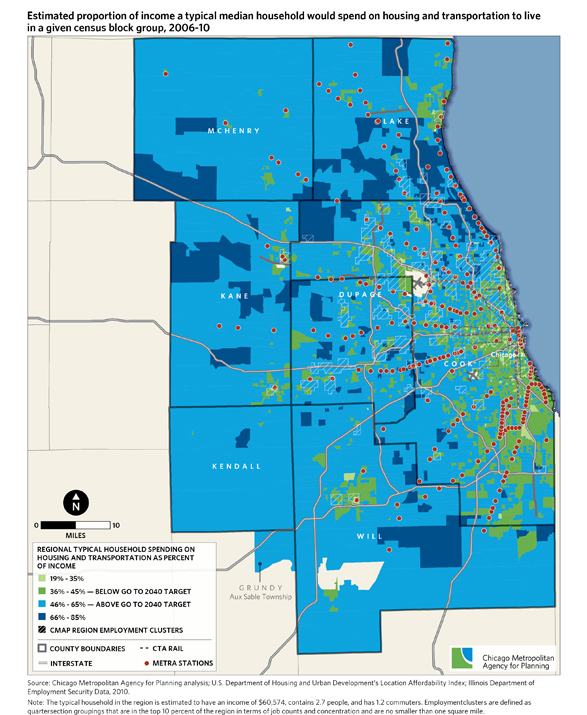 This map also identifies major employment clusters (as of 2010) using CMAP's analysis of employment data from the Illinois Department of Employment Security. Together, they contain approximately 50 percent of the region's jobs. Living close to a major job center can reduce a household's commute-driven transportation costs. Overlaying the LAI data with regional employment clusters indicates that the typical regional household would spend a lower percentage of income (between 19 percent and 45 percent) on combined housing and transportation costs near many of the major job centers.  There is a cluster of job centers in Lake County, though, where a typical regional household would spend a much larger portion of its income to live.  This could be due to a higher cost of housing and/or a concentration of high-income households in that area.

In addition, the LAI estimates that housing and transportation costs within the region's employment clusters are not affordable to low-income households. Because of the higher cost of housing around major job centers, low-income households must move farther away to find affordable housing and thus face increased commute times and costs.  This means fewer jobs are accessible within a 45-minute commute for many low-income residents. For example, CMAP analysis indicates that residents near the proposed CTA Red Line South Extension face long transit and auto commutes compared to the rest of the region. 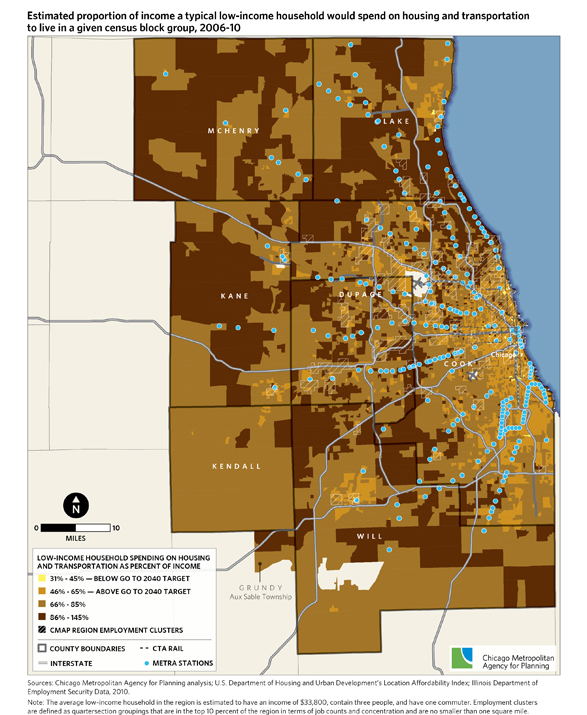 The GO TO 2040 plan recommends that the region promote livable communities by reinvesting in existing communities, pursuing opportunities for more compact, walkable, and mixed-use development, and providing a range of housing options. Over the long term, this development pattern can reduce household travel costs through decreased travel times and increased transit access. The full household cost savings of creating livable communities are best understood by including transportation costs along with housing costs when determining standards of affordability.

This analysis indicates that, while the typical regional household can expect to pay an affordable percentage of its income on housing and transportation costs in many areas of the region, very few parts of the region are affordable for low-income households. In addition to the household transportation cost impacts, this dichotomy reduces the ability of low-income residents to participate in the workforce, limits the access of businesses to the region's labor pool, and reduces economic competitiveness.

Providing more housing options throughout the region is one strategy to lessen these combined costs for low- and moderate-income residents. Local governments are the primary implementers of strategies to promote housing options. To assist communities in analyzing and planning for their future housing needs, CMAP and partners offer assistance through the Homes for a Changing Region program. Counties and municipalities have many opportunities to promote housing options, such as housing preservation, land trusts, or inclusionary zoning. Communities can also pursue opportunities for denser development that mixes uses and housing types near transit services, as well as ensure that new housing near transit includes affordable housing provisions in order to maintain affordability in the long-term. Appropriate ways to address mixed-use or mixed-income development will vary by community and should be implemented in locally appropriate ways.