This is the first in a series of three Policy Updates on the structure of transportation funding programs in Illinois, as well as the governance of the state and local highway system.  This post provides background information on the local motor fuel tax (MFT) allotments shared by the state with counties, municipalities, and townships, in addition to other transportation revenue-sharing programs.  The second post evaluates the effectiveness of the Illinois local MFT sharing program.  The final post explores the relationship between municipalities and townships in the local highway system and its funding.

Transportation projects have traditionally been paid for with user fees like gas taxes and vehicle registration charges --- those who use the transportation system pay for its construction and upkeep.  The Illinois Motor Fuel Tax (MFT) Law requires the Illinois Department of Transportation (IDOT) to share revenues from the State's 19 cents-per-gallon gas tax with local governments.

After a variety of diversions to various funds, the law specifies that 54.4 percent of the balance be allocated to local governments.  Of this portion:

If townships do not impose a property tax for road and bridge purposes of at least 0.08 percent (or in DuPage County, an amount of at least $12,000 per mile of township road is also allowable), their allocation is proportionally reduced.

The following table summarizes the total state MFT allotments to counties, townships, and municipalities; it does not consider the other transportation revenues that these jurisdictions receive from other federal, state, or local sources.  As the only county in the state with more than 1 million residents, Cook County received the full 16.74 percent of MFT revenues dedicated to large counties.  CMAP staff estimates that the allotment for the remaining 101 counties totaled about $0.08 per dollar received in motor vehicle license fees.  According to IDOT data for December 1, 2011 to November 30, 2012, the local MFT distribution to municipalities totaled $24.42 per resident and the local MFT distribution to townships totaled $1,233.86 per mile. 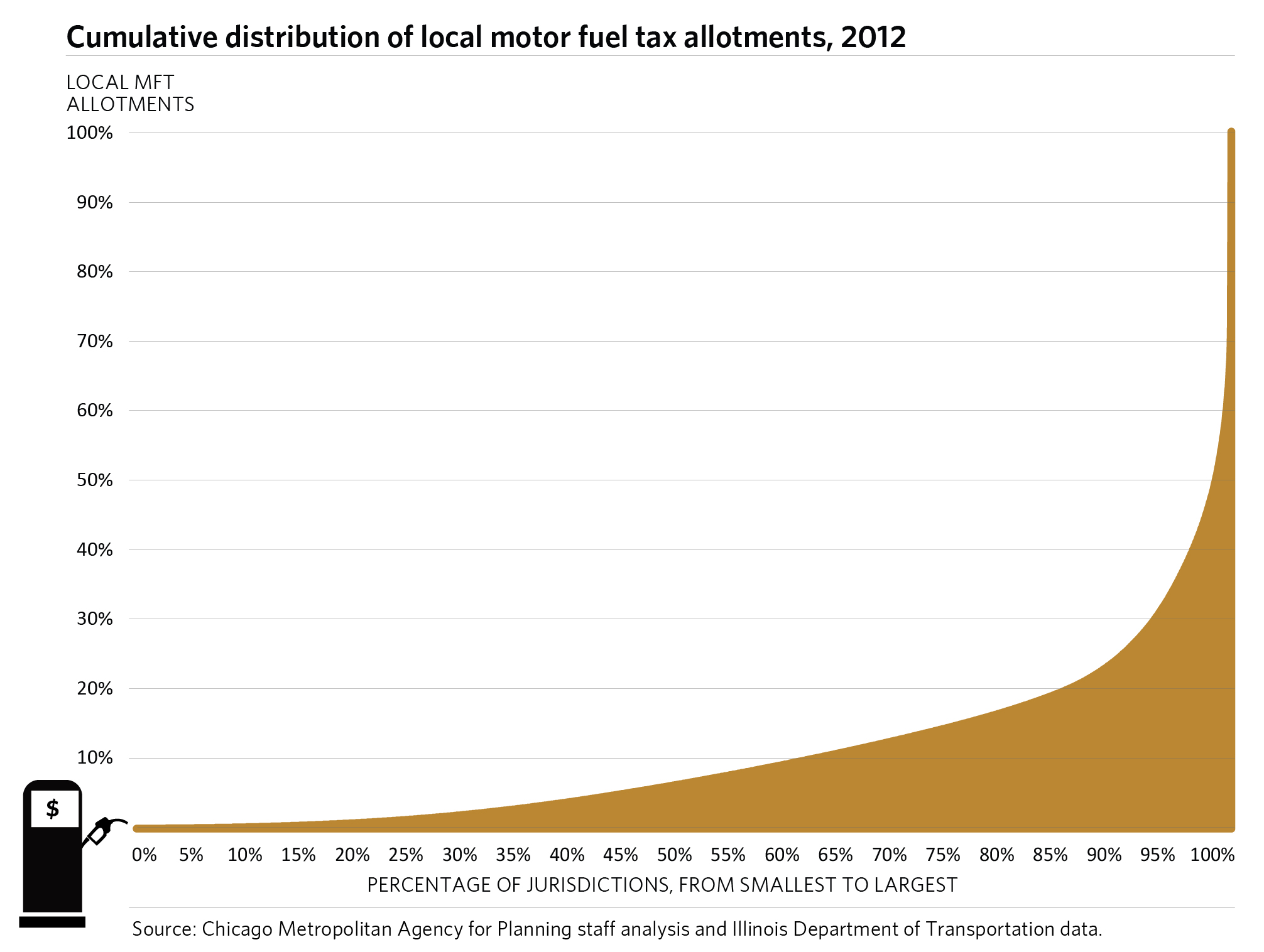 In 2012, as shown in the chart, jurisdictions collectively received the following MFT allotments:

Additionally, local governments received a total of $100 million in each of three years (FY 2011-2013) through the Illinois Jobs Now! state capital program.  These monies were distributed by IDOT according to the same criteria as the local MFT allotment.

The State's various programs for sharing revenue with local government represent a substantial amount of funds -- well over a half-billion dollars every year.  Although state law is quite specific regarding the funding percentages and distribution of local MFT allotments, the resulting dollar amounts are not necessarily tied to service needs.  Furthermore, as set percentages, the overall funding pots for counties, municipalities, and townships cannot respond to changing needs over time.  Other counties will eventually reach 1 million residents and be eligible for the 16.74 percent set-aside; current law is silent on how to distribute funds among very large counties.  And as municipalities annex formerly unincorporated land, their highway networks (and populations) will grow while townships' highway networks decline.

It is unclear to what extent the State's other five revenue-sharing programs complement the local MFT allotment; two of the programs use more or less the same criteria as the local MFT allotments, but the others use their own criteria.  For two of the latter programs, IDOT's public documentation does not specify exactly how disbursements are made.  On the whole, these stand-alone programs are fairly small, totaling only $54.8 million a year.

Subsequent posts in this Policy Update series will analyze connections between the State's revenue-sharing programs and system mileage, pavement conditions, and traffic volumes.