GO TO 2040 recommends expanding housing options for the region's residents. Housing options can also be thought of as housing stock diversity, where a mix of unit types and tenures (i.e., rental and owner-occupied units) are available to residents. The availability of multiple housing unit types in locations throughout the region helps provide choices for residents at all stages of life and can create the density needed to support transportation options. This Policy Update explores how housing stock diversity has changed in the region since 2000 and how those changes relate to trends in housing tenure.

The nation's and region's housing stock

To explore changes in housing stock diversity in the region, this Policy Update discusses CMAP analysis of five-year data from the U.S. Census American Community Survey (ACS) that provides more complete and accurate data for smaller geographies like townships, although its estimates are a weighted, rolling average.

The predominant housing unit type in the region and nation is a single-family detached home (SFH). Over the past 70 years, the proportion of SFH units in the nation's housing stock has ranged from a low of 64 percent in 1950 to a high of almost 70 percent in 1960. Since 1980, the national share has stabilized around 65 percent. While SFH units have maintained their proportion of housing stock nationally, the types of non-SFH units available to households across the nation have changed. Non-SFH units tracked by the U. S. Census include single-family attached units (i.e., townhomes) and multifamily buildings with two or more units in a structure.  Multifamily housing peaked in 1980 at 31 percent of the nation's housing units and has fallen slightly since, reaching 28 percent in 2013. Over that same period, townhomes have climbed from 4.4 percent of national housing units in 1980 to 6.2 percent in 2013.

While fluctuations in the total composition of the region's housing stock hint at increasing diversity, this varies across the region. One way to measure housing stock diversity is the ratio of SFH units to townhomes and multifamily units. This rough measure allows for a general assessment of whether a geography's housing stock is dominated by the most common unit type in the region and how that dominance changes over time.

In 2000, this ratio stood at .98 for the region, indicating that there were more townhomes and multifamily units than SFH. By the 2009-13 time period, this ratio had increased to 1.01, indicating that the number of SFH units in the region had exceeded the number of townhome and multifamily units combined. Understanding whether this change represents a diversifying housing stock requires geographic context due to the widely differing housing stock available throughout region. 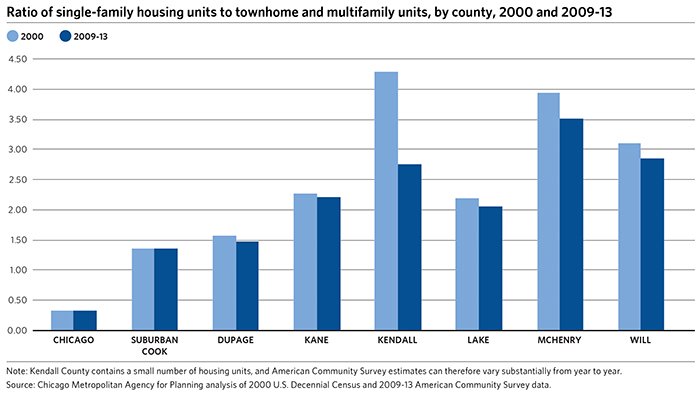 Regardless of how prevalent SFH units are in a given county, each county improved on the housing stock diversity measure. In suburban areas, this change was driven largely by the rapid growth in the number of townhomes. As shown previously, the number of townhomes added within the region since 2000 slightly exceeded the number of multifamily units added. These townhomes were concentrated in the region's suburban areas -- almost 95 percent of townhomes were added outside of Chicago. As shown below, the addition of townhomes was the primary method of housing stock diversification in five of the seven counties. For example, three times as many townhome units as multifamily units were added in both Kendall and McHenry counties.

Suburban Cook and DuPage counties present unique cases. While the housing stock in suburban Cook County became only slightly more diverse, this change was driven by the addition of multifamily units. Over 75 percent of the non-SFH units added in suburban Cook County since 2000 are multifamily. DuPage County increased its housing diversity by adding more townhome than SFH units, while multifamily unit production was only 20 percent less than SFH. Because Cook and DuPage are more developed than all other CMAP counties, such development patterns may reflect a higher proportion of infill development with more compact housing types and/or decreasing availability of the large sites required for typical SFH development.

In the City of Chicago, housing diversity also increased, although this occurred through the development of SFH units. In 2000, 70 percent of housing units in the city were townhome or multifamily. Since then, the city added almost equal numbers of SFH and multifamily units, slightly increasing the ratio of SFH to other unit types from .33 to .34. This increased development of SFH could mean that single-family units are being added more frequently as part of infill development rather than other types of development, or that multifamily buildings are being converted to single-family buildings through rehab. 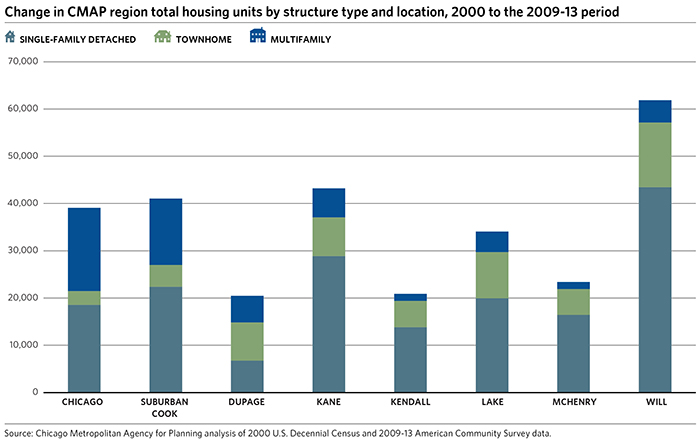 The many drivers of homeownership include economic conditions, household formation, housing supply, and household preferences. Prior CMAP analysis of 2013 annual ACS data indicated that homeownership rates declined slightly in the region between 2000 and 2013. While the five-year ACS data does not yet exhibit this trend that could change as more recent data is added to the sample.

Decreasing homeownership rates combined with increasing diversity in housing unit types have played a role in increased diversity of the housing tenure and type combinations available throughout the region. In particular, housing types occupied by renters have changed substantially. In 2000, 88 percent of renters in the region lived in multifamily units, but this share had fallen to 81 percent by 2009-13. One net result of this decline was a more than 80 percent increase in the number of vacant multifamily units in the region, regardless of tenure. A majority of this increase came from units in the City of Chicago.  Possible drivers of this trend include the extended impacts of the foreclosure crisis on rental properties and owner-occupied units alike, possible renter demand for single-family units, or overall economic conditions.  Whether these vacant multifamily units are reoccupied and by whom will invariably impact future regional housing stock diversity and tenure trends.

Previous CMAP analyses have discussed the regional and national trend toward rental of SFH units. This analysis indicates that this trend continues and the share of SFH units occupied by renters increased in the region between 2000 and 2009-13. In every county, the number of SFH units occupied by renters increased at a faster rate than the number of SFH units occupied by owners. In Chicago and suburban Cook and DuPage counties, the number of owner-occupied SFH units decreased. These trends may reflect the continued reverberations of the recession and the increased vacancy and foreclosure rates that accompanied it. Through CMAP's Local Technical Assistance Program, numerous communities have identified and often addressed concerns about how best to manage, monitor, and maintain their local housing stock given the increase in SFH rental units. CMAP and the Metropolitan Planning Council have explored regional and national best practices for communities struggling with this problem. 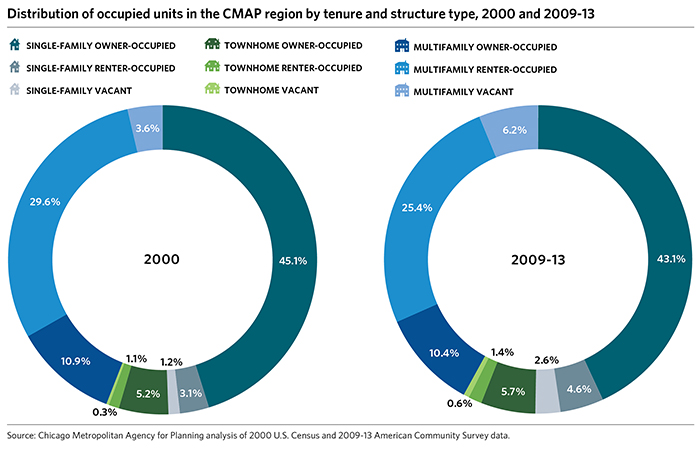 The growth in the number of townhome units also strongly reflects the growing trend toward rentership. The share of both owners and renters living in townhomes region-wide increased since 2000, with rental occupants increasing at twice the rate of owner occupants. The Joint Center for Housing Studies of Harvard University found that while multifamily buildings are the most common rental unit type in central cities, SFH and townhomes are a more common rental option in suburban and rural areas. Coupled with trends in the single-family market, the addition of townhome units throughout the region allows renters a greater number of choices of what to rent and where to rent. That said, tenure decisions are based not only on the types of units present, but also the changing preferences of households, economic conditions, and household-formation dynamics.

GO TO 2040 recommends that the region promote livable communities by reinvesting in existing communities, pursuing opportunities for more compact, walkable, and mixed-use development, and providing a range of housing options. This Policy Update indicates that housing options region-wide have become more diverse since 2000, taking into account regional differences in the housing stock.  Suburban Cook, DuPage, Kane, Kendall, Lake, McHenry, and Will counties all experienced an increase in housing stock diversity. In outlying counties, the change was due to growth in the number of townhomes. In suburban Cook and DuPage counties, where infill development may be more common, multifamily housing also played a critical role. Increased housing stock diversity in these areas, whether from townhomes or multifamily, helps advance the vision for the region set forth in GO TO 2040. Additionally, many of the region's suburban areas experienced an increase in the rental of single-family and townhome units. In contrast, the City of Chicago experienced an increase in the number of single-family detached units. With the growth of multifamily development in the region after the recession, monitoring whether housing options continue to expand alongside new tenure choices will be important.

These trends present municipalities with new challenges and opportunities as communities work to manage their local housing stock and meet the needs of residents. Providing and increasing housing options occur through local action. Local jurisdictions are the key implementers of land use policy. Developing housing plans, particularly using the recently released Homes for a Changing Region Toolkit can help municipalities consider the impact of regional and national housing trends and their relationship to the need for future housing stock diversity.