CMAP's regional economic indicators microsite features key measures of metropolitan Chicago's economy and, where applicable, compares these measures to peer metropolitan areas.  The microsite and accompanying Policy Updates are a resource for economic development professionals, planners, and others who seek to understand the complex factors that shape our region's competitiveness in the global economy.  This Policy Update supplements the site's intermodal lifts indicator by providing an in-depth examination of intermodalism and the economic advantages that intermodalism provides to Chicago's regional economy.

Metropolitan Chicago's ability to move goods quickly and efficiently has never been more important than in today's globalized economy. Intermediate and finished goods now must move great distances. Since the end of the recession, U.S. imports and exports increased by 36 and 38 percent respectively. Intermodalism -- the movement of containerized cargo via multiple transport methods such as rail, trucks, planes, and ships -- offers the best fit for some freight transportation needs, matching the universal access provided by trucks with the low long-distance hauling costs of rail transportation. The need to manage costs of fuel, labor, equipment, and inventory has contributed to further growth in the use of this transportation mode. As global trade and supply chains develop, demands on the region's freight system have increased.

This policy update explores intermodalism, how national trends affect metropolitan Chicago, and the challenges and opportunities faced by our region. It includes discussion of the most recent data showing that national intermodal activity increased by 35 percent between 2000-13, and that metropolitan Chicago is the largest point of origin and termination for intermodal shipments in the U.S., with close to half of all shipments originating or terminating here in 2013.

Growth in intermodal freight volumes has not only created new freight jobs in the region, it also supports the growth of the local manufacturing cluster. For employment segments that specialize in services key to intermodal shipping, such as third-party logistics, CMAP analysis finds that metropolitan Chicago's concentration of jobs like this -- part of what is known as the Freight Transportation Arrangement (FTA) industry -- is now the highest of similar U.S. shipping hubs such as New York, Houston, and Los Angeles.

While metropolitan Chicago's central location and confluence of rail activity form the foundation of its strength in intermodal transportation, the region must continue to focus on addressing the local challenges that intermodalism faces today. Increased volumes of goods movement and population growth have strained the regional transportation system, which suffers from costly road and rail congestion issues. To maintain metropolitan Chicago's competitive advantage in intermodalism and freight, policymakers need to encourage both public and private investment in renewing the region's infrastructure and planning for future growth.

Benefits and Costs of Intermodalism and Containerization

Intermodal goods movement involves shipping goods either in standardized containers loaded onto "well cars," or in trailers loaded onto "flatcars." These containers can be easily moved across multiple transportation modes, including ocean shipping. It is the proliferation of standard-sized freight containers that makes intermodal container movement possible. Referred to as containerization, the practice offers flexibility for shipping and storage of shipments that can be fit into standardized containers that do not require special handling along their journey. One of the many benefits of containerization is that shipments have low storage costs because containerized inventory does not need to be stored in a warehouse prior to use. Containerization also allows manufacturers and distribution networks to package and ship goods to a container depot, then store them until the goods are needed. By staging shipments in this manner, industries can fulfill needs "just in time" in limited delivery time windows.

Nationally, demand for intermodal transportation has increased the use of the railroad system. Railroads once dominated freight movement activity but lost substantial market share to trucking with the completion of the federal highway system. Rail's share of freight ton-miles fell from 85 percent in the early 20th Century to only 35 percent by 1970. Intermodal container facilities began to appear by the early 1970s, providing businesses located away from rail lines with access to line-haul rail service.

With greater use of communications technologies, standardization of containers, more efficient terminal tracks and cranes, and other process improvements such as lighter and less costly containers, intermodalism has become increasingly efficient over time. In addition to standard containers, the transportation industry has developed integrated trailers that can be attached to rail wheels for longer hauls. These specialized trailers, known as "road railers," are lightweight and can be moved from truck to rail without requiring a crane to transfer the container. Applications for bulk goods, such as grains, liquids, and chemicals have also been developed.

CMAP analysis has found that between one-quarter and one-third of all U.S. freight originates, terminates, or passes through our region. Metropolitan Chicago plays this central role in the national freight network because of its extensive freight infrastructure, which includes seven interstate highways, six of North America's seven Class I railroads, O'Hare International Airport, and water terminals serving the Great Lakes and Illinois Waterway. Intermodal rail transportation leverages the strengths of rail and trucking: using cost-efficient rail transport for long-haul portions of a trip, and using trucking for the first and last mile of a product's movement. Most intermodal transportation moves involve transferring containers between rail and truck at facilities equipped with cranes. The map below shows intermodal terminals in the region and the range of total containers lifted at each facility in 2013. Note that intermodal terminal facilities are often located in close proximity to the region's major highways and rail infrastructure. Chicago as an intermodal hub

Though rail shipment is generally slower than truck, advances in technologies and infrastructure that increase rail efficiency and allow for longer trains and double stacked cars have decreased intermodal travel time to the nation's busiest international ports.  Reaching these ports is critical for the region's manufacturing cluster, which exported approximately $34 billion in goods in 2013.  Metropolitan Chicago's central location and ample infrastructure provide businesses with fast, cost-effective access to major port cities on both the east and west coasts, with intermodal trains able to reach eight of the ten busiest ocean vessel intermodal ports in the continental U.S. in under three days and all ten ports within five days.

While international port areas represent significant destinations for Chicago region intermodal shipments, intermodal trade also occurs with inland regions.  The following map shows major Bureau of Economic of Analysis (BEA) zones of intermodal traffic for our region.  Coastal areas such as Los Angeles, New York, Seattle, and San Francisco are major trading partners.  Containers from foreign countries are unloaded in these regions, placed on train cars, and sent into and through Chicago.  These regions are also major areas of consumption and key nodes for the export of Chicago region containers. 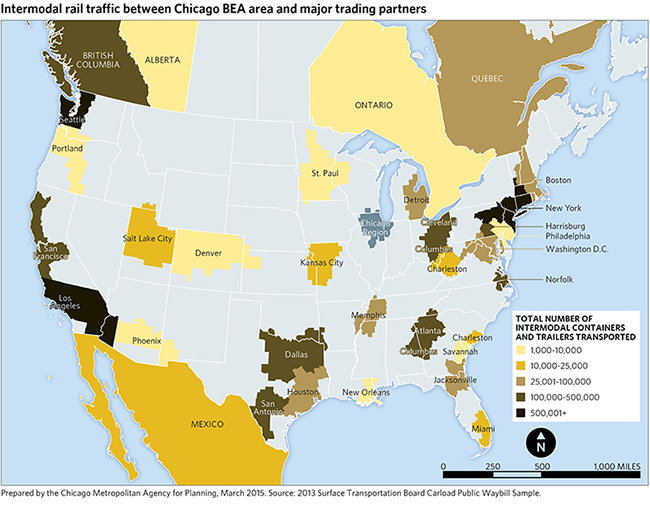 Since 2000, trade between regions such as British Columbia, Cleveland, Columbus, and Atlanta has grown significantly.  Increased container trade with British Columbia has been fueled by expansion of the Port of Prince Rupert and construction of its intermodal facility in 2007 and by modernization of Port Metro Vancouver, all part of an adopted transportation strategy.  Cleveland and Columbus are major intermodal trading partners for Chicago and are strategic hubs for both Norfolk Southern and CSX railroads.

In 2013, the Chicago BEA area accounted for slightly less than half of all domestic intermodal container traffic in the United States.   While the vast majority of products moving into and through the Chicago region are transported via truck, recent enhancements in rail technology, increased road congestion, truck driver shortages, and higher fuel costs have led to increasing use of multi-modal freight transportation solutions.  (For a full definition of BEA areas, see the 2013 Surface Transportation Board Carload Waybill Sample.)

On a national level, between 2000-13, intermodal container shipments grew from 11.2 to 15.2 million containers, a 35 percent increase.  During the same time period, the Chicago BEA area experienced intermodal shipment growth of 28 percent.  Although the Chicago BEA area's share of intermodal traffic has declined slightly as a proportion of national totals, the trend marks a rise of intermodal activity nationwide. Capacity is increasing nationally, and the opening of new intermodal facilities could improve Chicago's economic reach with better connections and new trading partners.

In 2013, over seven million domestic intermodal shipments originated or terminated in the Chicago BEA area. This makes Chicago the largest point of origin and termination for intermodal shipments in the U.S., outpacing other large freight hubs such as the Los Angeles, New York, and Seattle BEA areas. Increased levels of intermodal trade and goods movement have facilitated increasingly complex supply chains in recent years.  Intermediate goods are now sourced from around the world, exposing manufacturers to a multitude of new supply chain risks.  To manage the logistics portions of these chains more efficiently, some businesses have outsourced logistics management to third-party logistics providers, known as "3PLs," that provide door-to-door transportation consulting services for businesses.  3PL firms are part of the Freight Transportation Arrangement (FTA) industry, which has experienced significant growth in the seven-county Chicago region over the last 13 years.  Metropolitan Chicago's FTA industry has a high degree of concentration in the region, with a location quotient  that now stands at 2.57, the highest among its peer regions. Occupations in the FTA industry pay an average of $77,000 per year, with many requiring less than a bachelor's degree.  Since 2001, the Chicago region's freight cluster has added 3,800 FTA industry jobs.  The seven-county CMAP region is now home to over 16,500 FTA jobs.

As global trade and intermodal transportation continue to grow, our region's policymakers will be presented with opportunities to expand Chicago's presence as a premier U.S. intermodal hub.  Ensuring the future vitality of our rail infrastructure is critical to maintaining the region's dominance as an intermodal freight hub.  GO TO 2040 calls for full implementation of the Chicago Region Environmental and Transportation Efficiency (CREATE) program by 2030 as a key step in promoting a more efficient regional freight network.  More specifically, the plan calls on the region to build a larger national coalition to support the CREATE program and secure funding for its completion. CMAP's recently launched mobility data visualizations include tracking of CREATE projects, one of which is an upgrade to three critical freight rail corridors. CREATE has fostered public and private investment in the region's rail infrastructure to ensure that rail traffic chokepoints do not degrade the region's competitive advantages. Continued analysis of trading trends among major partners will help the region maintain its competitive position and lay a foundation in planning for future intermodal growth.