The Moving Ahead for Progress in the 21st Century (MAP-21) two-year transportation reauthorization bill made a critical change to eligibility requirements for New Starts funding for transit, as GO TO 2040 recommends. Specifically, MAP-21 expanded funding eligibility to include a new category of "core capacity improvement projects." These projects must increase the capacity of a transportation corridor by at least 10 percent, and as such, they can now include improvements to existing facilities. This new criterion is a major gain for the region because metropolitan Chicago has a large existing transit network that requires significant modernization -- likewise, as recommended by GO TO 2040.

The discretionary New Starts program is the largest federal funding source for transit projects. It provides funds for the construction of new fixed-guideway systems or for the extension of existing fixed-guideway systems. The funds are not intended for maintenance projects. The prior New Starts criteria created an incentive to pursue expansion projects rather than to upgrade existing systems. With MAP-21's added eligibility of core capacity projects, our region's transit agencies can now use New Starts funding for modernization and reconstruction projects that also increase system capacity.

Several other changes to the New Starts program in MAP-21 may provide benefits for metropolitan Chicago. At an administrative level, project evaluation criteria and development steps have been streamlined, which should allow faster project review. Additionally, up to three fixed-guideway Bus Rapid Transit (BRT) projects in the nation may now receive New Starts funding. MAP-21 creates two classes of BRT projects: fixed-guideway and corridor-based. Fixed-guideway BRT projects have improved stations, dedicated right-of-way during peak hours, and other features that emulate rail service. Corridor-based BRT systems may have substantial improvements like unique stations or traffic signal priority , though they run in regular traffic for the majority of their route. Currently, the region's BRT projects are likely to fall into the corridor-based category.

GO TO 2040 makes additional observations and recommendations regarding the federal New Starts program that were not addressed in MAP-21. Currently, the local match funding required for New Starts projects differs from that for highway projects. New Starts grantees must provide a statutorily required local match of 20 percent, and the Congressional Conference Report that accompanied the FY 2002 U.S. Department of Transportation (U.S. DOT) Appropriations Act instructedthe Federal Transit Administration (FTA) to lower the federal share to 60 percent. The Plan notes that, in contrast, highway projects are generally funded with a federal share of 90 percent for Interstate maintenance and improvements, and 80 percent for most other projects. This creates a funding advantage for highway projects.

Second, FTA rules concerning the use of federal funds for engineering of transit projects are stricter than those used by the Federal Highway Administration for roadway projects. GO TO 2040 recommends that these requirements be changed so regions can more easily pursue transit improvements. While CMAP strongly supports the addition of core capacity improvement projects to the New Starts program, more changes are needed to create equity between transit and highway funding.

The CMAP region has received New Starts funding for a number of projects over the last two decades. As the graph below demonstrates, these funding allocations have been uneven over time. The chart's peak in the mid-2000s is related to five projects: reconstruction of the CTA Brown and Pink Lines and added stations and tracks on Metra's North Central, Southwest, and Union Pacific West lines. The region has no active New Starts projects at this time. 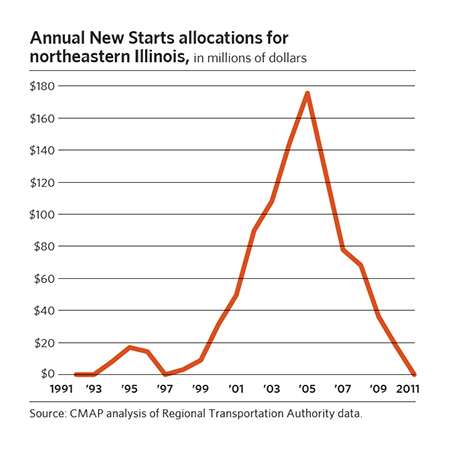