GO TO 2040 encourages local decisions that make effective use of land, generate good jobs, and trigger sustainable economic activity.  To achieve this, local revenue streams must sustain public services and infrastructure investments that attract and retain both residents and businesses.  When making decisions regarding the types and balance of revenue that will be used to fund public services, municipalities must also consider other issues such as quality of life and community, and economic development needs.  A number of characteristics drive a municipality's reliance on any one revenue source, such as the types of public services performed by the municipality or its development patterns.

Local revenue sources, though, differ in terms of their stability.  Relying on any one source in particular can result in disruptive fiscal impacts, including changes in economic conditions or development patterns.  For example, vacant retail properties can drive down sales tax revenue, population declines may decrease income tax revenue, and reductions in property values may lead to increased property tax rates.  This variation in revenue stability affects the ability of communities to provide consistent services and maintain tax burdens.  In addition, reliance on less stable sources like sales tax revenue may drive increases in the associated rates.

Variation in revenue reliance across municipalities

To analyze revenue reliance, CMAP looked at property, sales, and income tax revenue as a proportion of total revenues in each municipality in northeastern Illinois.  The analysis uses 2012 data from the Illinois Office of the Comptroller (IOC), which includes 275 out of the region's 284 municipalities, as well as data from 2009-11, which includes varying numbers of municipalities.  This data is self-reported by local governments as required by state statute.  The analysis includes revenues in general, special, capital, and debt service funds, and excludes revenues in enterprise, internal service, and fiduciary funds. 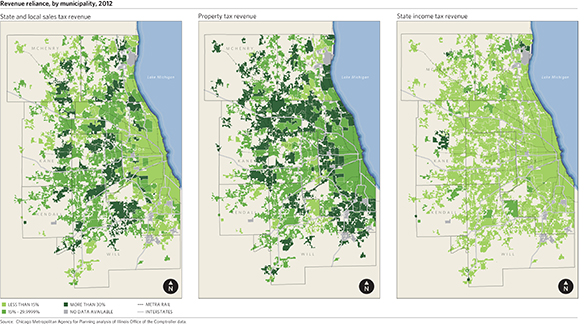 Characteristics behind varying reliance among municipalities

Municipalities can choose to generate revenues from a variety of sources.  In some cases, the predominance of one revenue source is connected to a policy decision not to employ certain tax options, for example.  In other cases, reliance on certain revenue streams are associated with different characteristics of the municipality, such as its tax base, its services offered, or its market potential for a given land use type.  The extent of reliance on each revenue type depends on the tax rate imposed, the tax base, the extent that other sources are used, and other characteristics of the municipality. 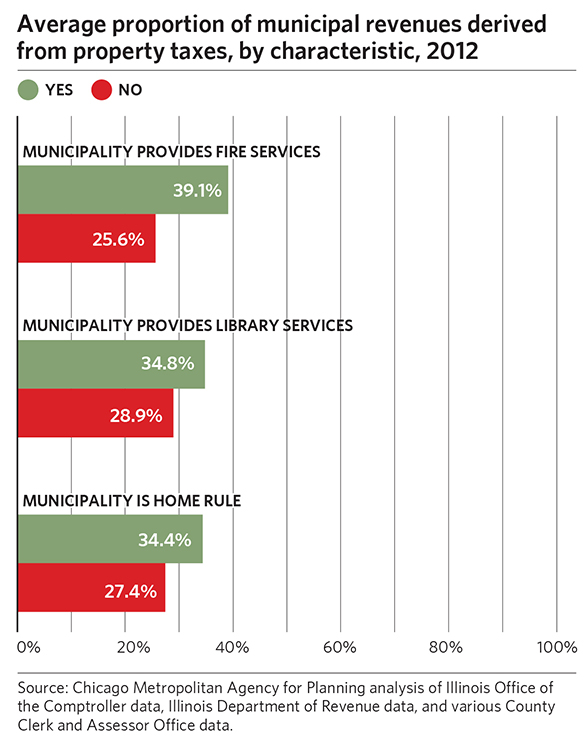 In contrast, some municipalities are very reliant on sales tax revenue.  In 2012, 54 CMAP municipalities had more than 30 percent of their revenues comprised by state and local sales taxes.  Municipalities with higher reliance on sales tax revenues tended to have larger sales tax bases on a per capita basis, with a median of $28,677 compared to $10,769 for municipalities that have lower reliance.  This indicates a preponderance of land uses dedicated to sales tax-generating activities.  Potential land uses include retail properties, as well as office or industrial properties where sales are sourced.  The preponderance is driven by a combination of local-market demand for businesses and local policy decisions that encourage retail and other sales tax-generating development within their borders.  Market factors include a variety of considerations, such as consumer demand, the existence of retail clusters, and the location of distribution networks. 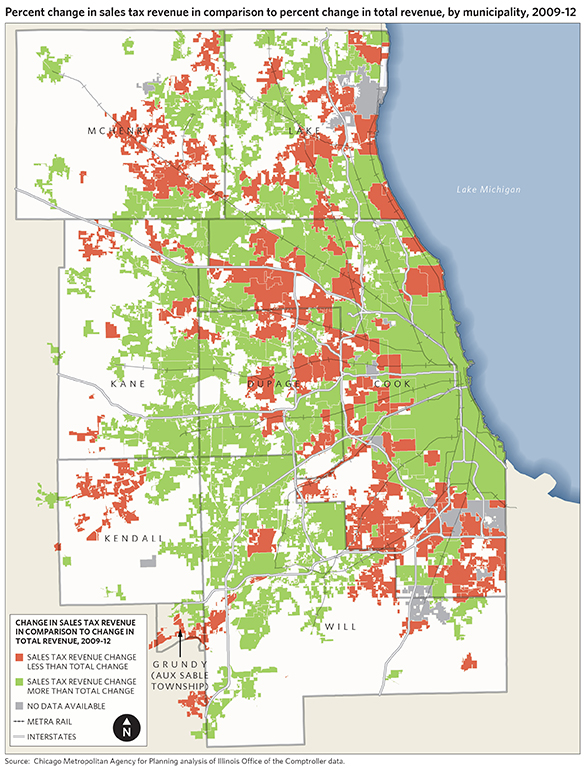 The level of stability of the sales tax has a number of drivers.  One is simply the economic cycle and associated drops in consumption.  Most municipalities will experience drops in sales tax revenues during periods of poorer overall economic performance, although the impact varies from place to place depending on the composition of the sales tax base in individual communities.  In addition, sales tax revenue can become less of a viable source for communities when retail land becomes vacant, putting communities that rely heavily on sales tax at financial risk.

Local land use decisions that prioritize retail land uses over others may drive the development of excess retail capacity.  Underutilized retail property has negative fiscal and economic impacts on a community, as well as the region as a whole.  Future CMAP research will examine the landscape of retail vacancies in metropolitan Chicago, which affects the ability of municipalities to rely on sales tax revenue.