As a global metropolis and economic center of the Midwest, metropolitan Chicago is poised to prosper in an increasingly interconnected world.  GO TO 2040 seeks to maintain and strengthen this position by building on the region's many assets – a diverse mix of industries, vast physical infrastructure and open space, a skilled workforce, and preeminent educational and research institutions. To inform communities and policy makers about the health of the region's economy, CMAP is rolling out a new web microsite with data and analysis tracking a wide variety of regional economic indicators.  Focusing on four major economic themes, the site's analysis covers broad economic trends and major industry clusters, as well as workforce and innovation metrics outlined in GO TO 2040.

In coming weeks, CMAP will release indicators in four areas: base regional trends (July 7), workforce (July 14), clusters (July 21), and innovation (July 28).  This week's release includes indicators that examine broad regional economic trends: real Gross Regional Product (GRP), median household income, the total number of jobs in the region, and unemployment. Regional data are presented along with data for peer metropolitan areas where available.  Several years of data are presented for each indicator, allowing the reader to observe ongoing trends and the context of the region's current standing.

Trends indicators underscore the assets and challenges in the region's diverse economy by tracking activity at the broadest level.  In 2012, the region produced an estimated $489 billion in goods and services, surpassing the 2007 pre-recession peak for the first time.  Despite GRP growth in recent years, long-term trends show that real median household income in the region has declined by 8.1 percent since 1989, and unemployment has continued to exceed national rates.  The region is home to an estimated 4.64 million jobs, which is still fewer than existed in 2007 prior to the most recent recession.

Throughout the year, CMAP will post policy updates using these and related indicators to provide more in-depth analysis on various phenomena affecting the region's economic performance. 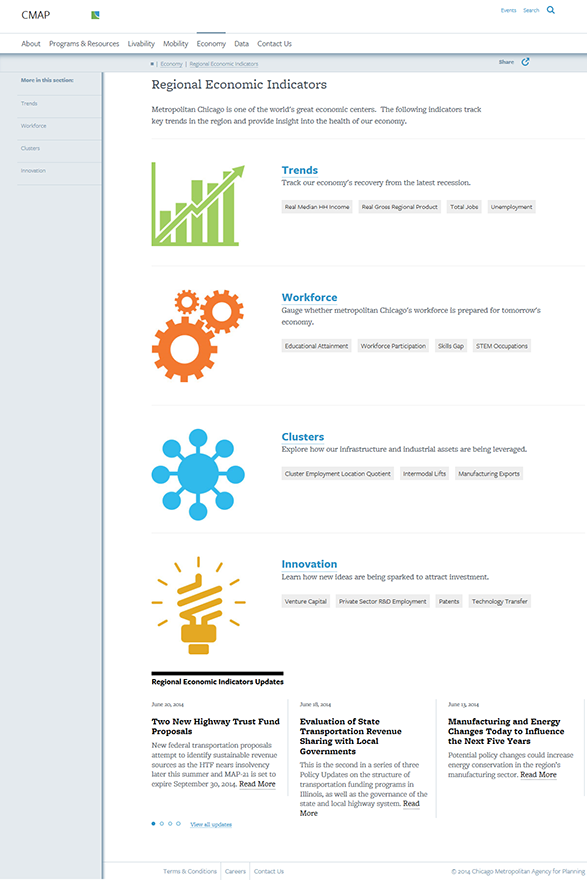