As the baby boomer generation ages, the senior population in metropolitan Chicago is expected to continue increasing. According to GO TO 2040, the number of residents between 65 and 84 years of age is projected to double by 2040. Furthermore, the number of residents in the region who are over 85 years old is projected to triple. Much of this growth is projected to occur in parts of the region where residences, services, and commercial areas are currently more spread out and not well-served by public transit, creating difficulties for those who have limited mobility and cannot drive. This phenomenon will have major impacts on future housing, land use, and transportation needs. Sustaining our residents' ability to "age in place" -- to remain in their homes and communities as they age, if they choose -- is a key challenge confronting the region.

On August 4, 2011, the U.S. Census Bureau released additional 2010 decennial census data for Illinois, providing more details than were available with the redistricting data released earlier this year. The release includes age group data, which shows that the senior population is growing faster than the overall regional population, as well as that the median age of northeastern Illinois residents is rising. The following table shows that six out of the seven counties experienced an increase in median age between 2000 and 2010. 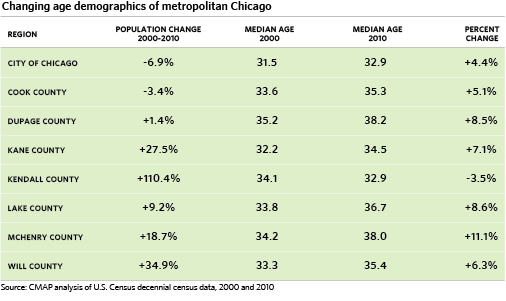 McHenry County experienced the highest rate of increase in median age, from 34.2 to 38. Cook, DuPage, Kane, Lake, and Will Counties also experienced increases in median age. These trends were also observed statewide, where the median age increased from 34.7 in 2000 to 36.6 in 2010, an increase of 5.5 percent. Increasing median age may be a sign of the aging baby boomer generation, which is expected to lead to an increasing senior population in both metropolitan Chicago and the rest of the nation. 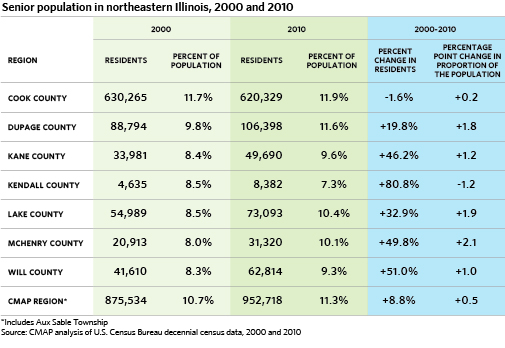 The following map shows a more localized analysis (by township) of the change in the proportion of the senior population in the past decade. (Select this link to see a larger pop-up version.) 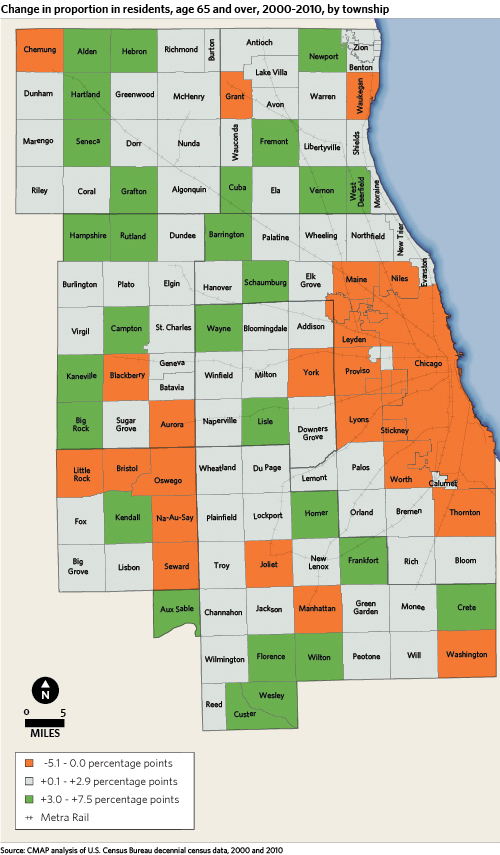