To maintain and enhance metropolitan Chicago's position as a global economic hub, GO TO 2040 lays out a vision that leverages our strongest assets as a blueprint for sustainable economic growth. The residents of northeastern Illinois are foremost among these assets, serving as the region's greatest renewable resource. But recent trends indicate that population growth in the region has stagnated, particularly compared to peer metropolitan areas. While the scope of changes varies within the CMAP region's cities and counties, the overall message is clear: The Chicago region as a whole is lagging peer metros in population growth.

On an annual basis, the U.S. Census provides a wealth of data on migration and population change for the nation, counties, and cities. This policy update assesses these trends in our region and discusses their implications. Recent population estimates and migration data indicate that, while the Chicago region continues to attract international migration, it has struggled to resume migration at pre-recession rates and now lags behind other large metropolitan regions.

Recent annual population estimates indicate that the Chicago region's population growth has slowed and is now trailing other regions that metropolitan Chicago competes with to attract talent. While only select U.S. metropolitan areas have resumed their pre-recession growth rates, other metros have been growing at a substantially faster rate than our region. New growth patterns have also emerged nationwide.  Since the recession ended, population growth in the nation's major metropolitan areas has generally been concentrated within major cities. As shown below, this pattern has also occurred in the 14-county Chicago-Naperville-Elgin Metropolitan Statistical Area (MSA), with the City of Chicago growing at a slightly faster rate than the remainder of the region. While the Census highlighted the Chicago region as a major example of concentrated population growth from 2000-10 in both the downtown core and suburban edge, those trends appear to have moderated in recent years, with slower population growth throughout the region since 2010 and less growth concentrated in the City of Chicago. As described above, annual census population estimates for the region do show growth.  The U.S. Census uses four components to develop annual population estimates -- births, deaths, domestic migration, and international migration. Remaining unattributed change is called a residual.  As with other older, urbanized regions, net negative domestic migration patterns are balanced by natural increase (the balance of births and deaths) and international immigration. Since the recession, many CMAP counties have experienced substantially slower population growth. Cook County is the exception, with population increases beginning in 2005 after five years of proportionally small declines. 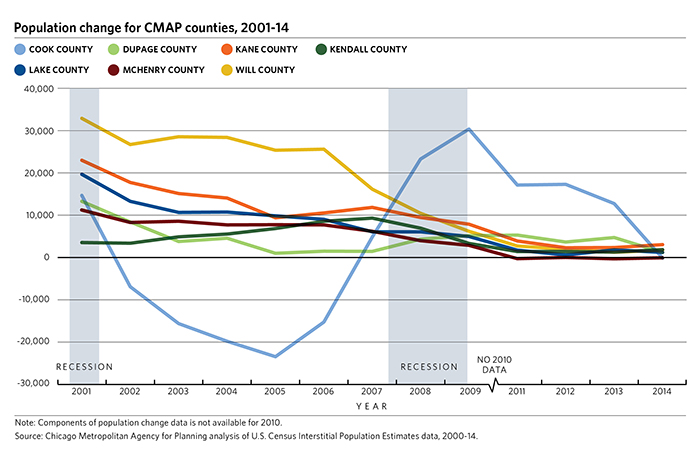 The population totals shown above are approximate annual estimates, so major conclusions cannot be drawn from change in a single year. But similar trends across multiple years offer some insight into population change in the CMAP region.  For example, most of the region's counties have seen recent small increases or declines that are likely within the margin of error. Region-wide, natural increase is down due to a decreasing birth rate. In addition, domestic out-migration has returned to pre-recession levels while international migration has not, meaning that the region's role as an international gateway may have declined. 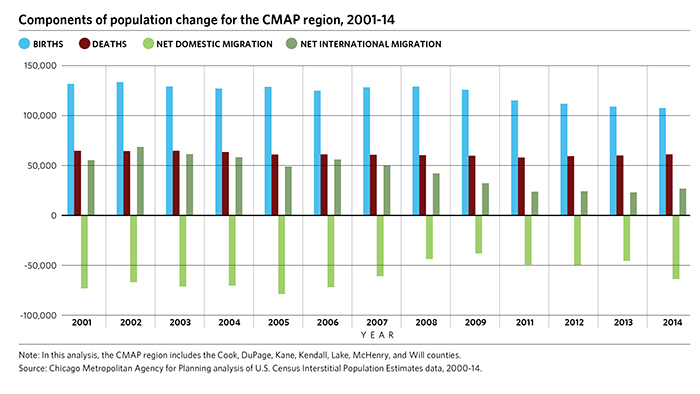 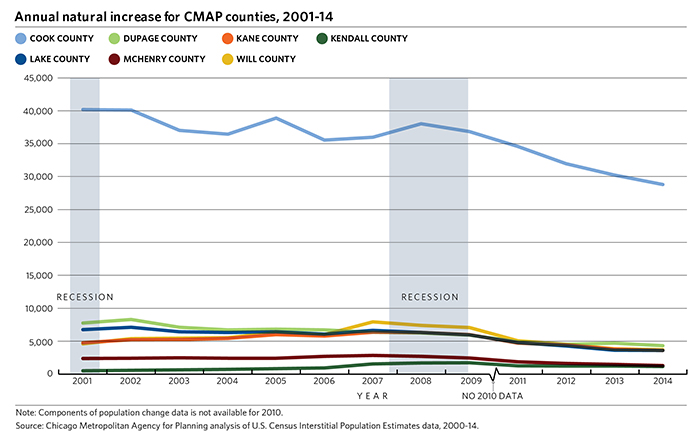 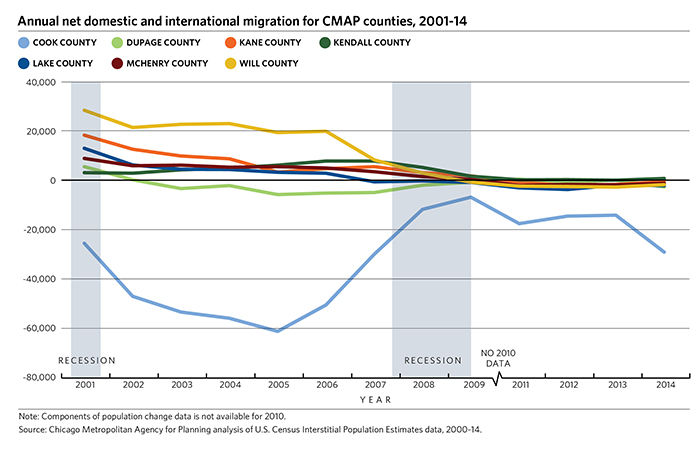 First, residents tend to move from Cook County to other CMAP counties or counties within the Chicago MSA. This trend is not unique to the CMAP region. A similar in-region migration pattern, in which central counties lose residents to outer counties, occurs in most of the country's largest metropolitan areas, including New York, Los Angeles, Houston, and Dallas-Fort Worth. A recent U.S. Census report on migration patterns noted the 25 largest county-to-county net migration flows in the country. Of these, 21 involved moves from a region's central county to adjacent counties. As shown below, peer regions like Los Angeles and New York also experience very similar outward population flows from the county or counties containing the region's central city to adjacent suburban counties. The annual census population estimates discussed above provide one indication that this trend may have slowed. More importantly, counties within the CMAP region tend to lose population to other areas of the country. In all counties except Cook, this has historically been balanced by international in-migration as well as in-migration from other parts of the CMAP region. Since the recession began, migration as a whole has slowed, but international in-migration has been more heavily affected than domestic outmigration, leading to net migration losses. This conclusion is also supported in the annual population estimates discussed above.

This analysis indicates that, while the region's population growth has begun to recover from recessionary lows, that growth substantially lags peer regions. CMAP's economic analysis has described similar trends. For example, the region's gross domestic product also trails our peers. CMAP also examined jobs in science, technology, engineering, and mathematics (STEM) fields that drive innovation, finding that the region's growth in many key industries is behind our peer regions. While this analysis does not attribute a causal relationship between the region's economic and demographic trends, growth that is lagging compared to competitive regions indicates a challenge that must be addressed by the region as a whole.

GO TO 2040 and subsequent CMAP analysis highlight the need for regional stakeholders to collaborate to ensure the region has an educated workforce, a supportive environment for the region's clusters of economic strength, adequate infrastructure for the region's core industries, and a transparent and collaborative economic development approach. State-level issues, such as infrastructure spending, the tax structure, and overall uncertain fiscal climate also have an impact. Within the region, a number of nascent, region-wide efforts are encouraging economic investment and employment growth in the region, including the Chicago Metro Metal Consortium, the Metro Chicago Exports initiative, and a region-wide effort to coordinate truck permitting across the seven counties. These efforts offer important steps toward broader regional collaboration on workforce development, business attraction, infrastructure, and industry cluster issues that can help the region become more competitive in a global marketplace.