The cumulative choices of the region's communities determine quality of life and economic prosperity across our region.  Local decisions about land use are a critical component of these decisions.  In Illinois, state sales tax revenue is disbursed to municipalities and counties based on where sales are generated.  This structure means that retail has the potential to provide a strong fiscal benefit to communities.  As such, communities may prioritize retail land use or allow development of excess capacity, leading to more retail space than the market requires.  The system can also lead to an over reliance on sales tax revenues, which can leave municipalities short of funds when retail sales decline.

This Policy Update will provide an overview of the relationship between retail vacancy and sales tax revenues in the region's communities.  CMAP analysis of retail vacancy and sales trends indicates that municipalities with higher vacancy rates tend to have lower sales tax revenues disbursed from the state.  Across the region, this often occurs in areas with a lower economic base, but even areas with high state sales tax disbursements can experience high vacancy rates.  The combination of high vacancy and low sales tax revenues is problematic because retail developments require municipal services regardless of the extent of their utilization.

Almost one-quarter of nonresidential development in the CMAP region is retail space, according to CoStar data on office, industrial, and retail development for 2015.  Retailers have many reasons for choosing to locate within the region, but local demand for retail space is driven by subregional demographic trends.  In particular, retail development requires support from either nearby residents or drivers and passersby.

The following map provides an overview of retail square footage per capita in northeastern Illinois, differentiating between communities with more or less than the median retail rentable building area of 44.7 square feet per capita.  Because of broad demand for retail by residents of all seven counties, such development is well-distributed across the region.  Other land uses, like office or industrial developments, tend to cluster in fewer areas of the region.  Retail developments often cluster along corridors or major intersections, seeking to attract customers through co-locating with other retailers.  Some retail types, such as convenience or grocery stores, may locate outside of these corridors and in closer proximity to residents. 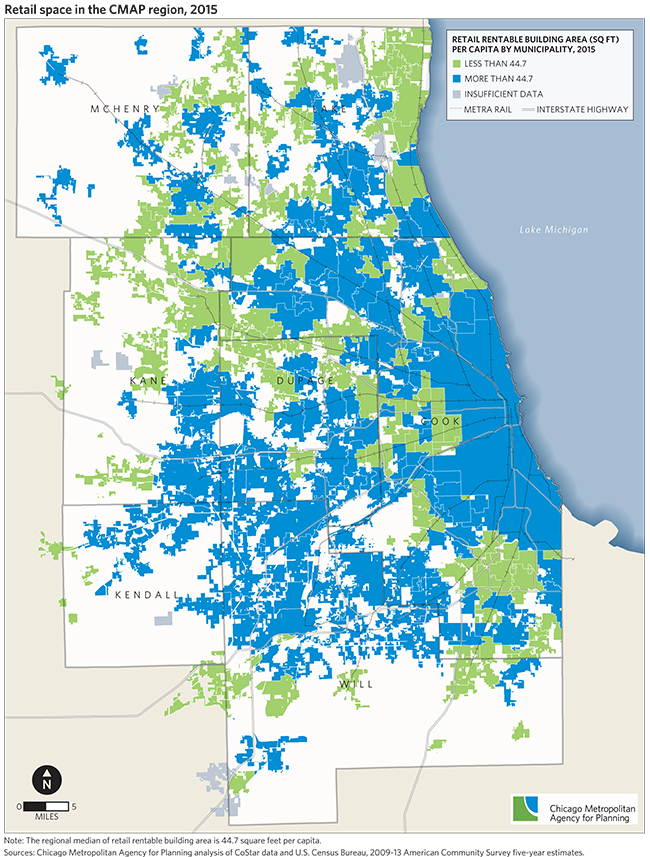 As local demographics or traffic patterns change, retail development may become vacant or grow to accommodate changing demand.  However, previous CMAP research has indicated that individual local development decisions may cumulatively lead to overbuilding in regional submarkets or the region as a whole.  According to CoStar data for the second quarter of 2015, the Chicago Costar region (which includes Rockford in Illinois, Kenosha in Wisconsin, and northwestern Indiana) has the highest retail vacancy rate of the 10 largest U.S. metropolitan areas.  The following chart illustrates that the Chicago region has a higher proportion of the country's vacant retail space than most other major metropolitan areas aside from the New York City region, which has much more retail space overall than the Chicago region.  In total, the Chicago region has 4.1 percent of the nation's retail space and 5.7 percent of its vacant retail space.  In addition, the national retail vacancy rate is less than the national office and industrial vacancy rates.  Metropolitan Chicago is atypical because its retail vacancy rate is higher than both the national and regional industrial vacancy rates. 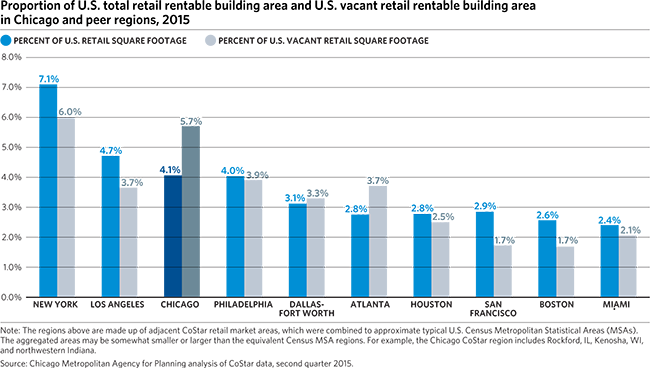 The interaction between retail vacancy and sales tax 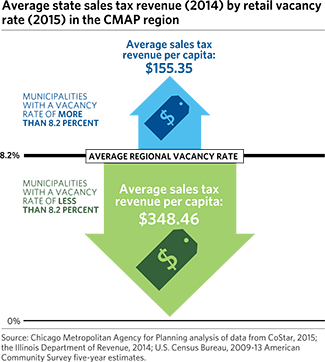 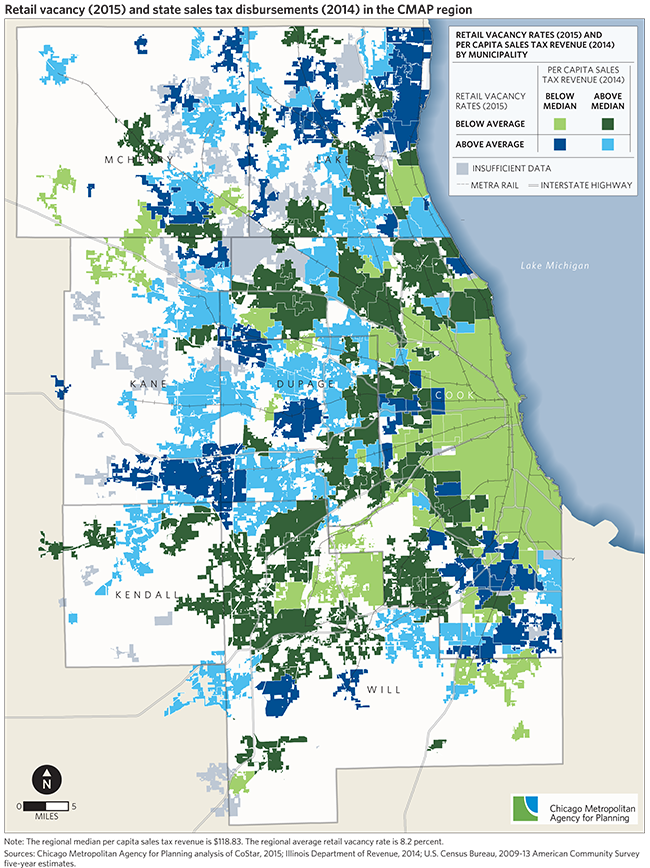 Across the region, the interaction between vacancy rates and sales tax revenues varies.  In areas of the region with higher per capita state sales tax revenue (in the map above, the dark green and light blue categories), a mix of vacancy rates illustrates that even areas with higher than average retail revenue can be burdened by higher vacancy.  As shown in the first map illustrating the location of retail around the region, many of these areas have relatively high retail density.  These retail developments require services regardless of the extent of their utilization.

Among the 56 municipalities with a high vacancy rate and low per capita sales tax revenue (navy blue category above), 42 also have a lower property tax base per capita than the median level.  Some of these areas may experience a trifecta of challenges:  low sales base, low property tax base, and a high vacancy rate.  Low retail occupancy may be due to a perceived lack of demand by retailers, insufficient demand to support various retailers over time, or changing building demands by retailers that may make older structures obsolete.

A sales tax revenue sharing system that bases disbursements on the location of greater retail activity will inherently exclude areas with poorer economic conditions that also have a low property tax base.  CMAP analyzed the 284 municipalities in the region and found that out of the 142 municipalities that have a lower than median per capita property tax base, 97 also have lower than median per capita sales tax disbursements.  The map below shows that many areas with a lower property tax base, as measured by Equalized Assessed Value (EAV) also have lower sales tax revenues (light green category below). 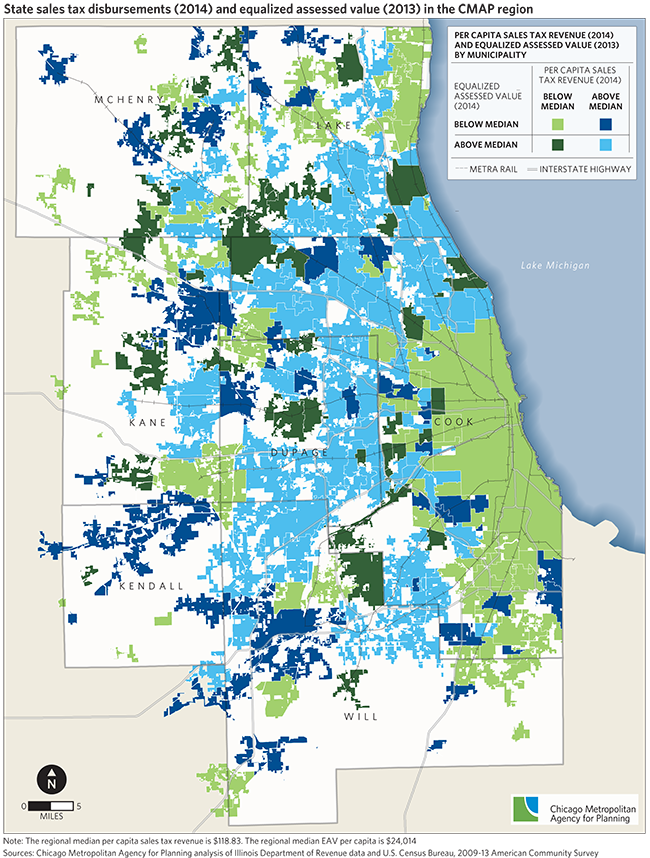 The criteria in Illinois that provide state sales tax revenue to communities based on the location of retail sales are effective for providing revenues to areas with strong retail activity.  Communities in northeastern Illinois plan for retail land use and development based on this tax policy framework, as well as local needs.  Municipalities cannot perform market analyses on all retail developments that are proposed, and must trust that retailers and developers are making sound market decisions in their choices to construct new facilities.  However, better coordination along major corridors and across communities in growing areas may lead to better long-term outcomes in terms of retail vacancy and underutilization.

When communities permit too much retail development, they may experience vacant retail and/or an underperforming sales tax base.  When this occurs, communities may find that the sales tax revenue sharing criteria are less effective at providing the resources to service underperforming retail areas. This can be particularly true for economically distressed communities.  Additionally, the current structure does not provide revenue for non-sales tax generating development, some of which, like dry cleaners, are often present in typical retail developments.  Developments that include such businesses may not generate sufficient tax revenue to fund required municipal services.

Several recommendations in GO TO 2040 can help communities populate vacant properties of all types, including retail.  Strategic investments in infrastructure, including transportation and stormwater infrastructure may help make sites more attractive to businesses.  Creating a "sense of place," encouraging mixed-use development, and increasing residential households and/or density may be beneficial to creating market demand for retail businesses.  Retail development requires households and passersby to provide sufficient customer base.  Without these elements present, communities might also consider other uses for underutilized sites.  Redevelopment of grayfields (such as sites of older underused or abandoned shopping centers) and brownfields (contaminated areas where industrial activity once took place) can turn vacant land into sites that produce jobs and investment as well as tax revenue.  CMAP's Local Technical Assistance program has worked to help communities plan for infill development and reinvestment, with 39 out of 66 completed projects addressing this issue either as a central focus of its recommendations or as a topic in the plan.

GO TO 2040 also recommends tax policy reforms that benefit the region by encouraging decisions that make effective use of land, generate sustainable economic development, and encourage efficiency by broadening the sales tax base.  CMAP will continue to explore the interaction of tax policy and land use as part of preliminary work for northeastern Illinois' next comprehensive plan.