As of November 2015, there were 359 active sales tax rebate agreements between local governments in the region and businesses or developers.  The agreements rebate state sales tax disbursements, home rule sales tax, and/or non-home rule sales tax revenues back to the business or developer.  This analysis does not include sales tax sharing agreements between local governments, or other types of tax rebates, such as business district sales taxes.  The November 2015 total is an increase from November 2013, when the region had 343 rebates meeting these criteria.  Consistent with the prior analysis, most rebates went to shopping centers and retailers (184) and vehicle dealerships (127).  Regardless of type, the developments and businesses receiving these agreements are well-disbursed throughout the region.  The following map provides an overview of these rebates by development type. 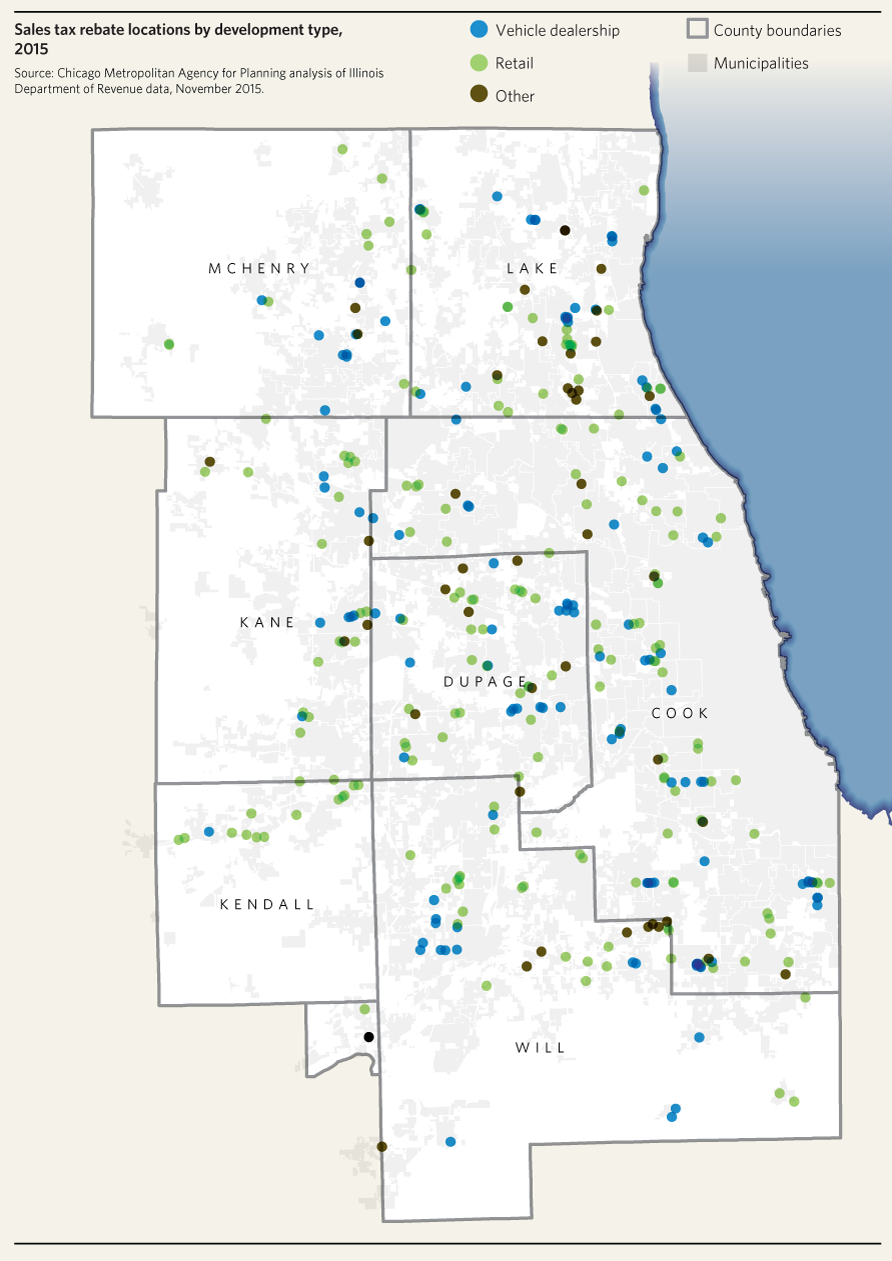 Due to vague reporting requirements, the IDOR database does not consistently provide comprehensive details about the specific structure of sales tax rebate agreements -- the state statute only requires that counties and municipalities report information on the process for determining the amount of sales tax rebated.  Sales tax rebates are typically structured to rebate a set proportion of sales tax revenues for a period of years or until a certain maximum rebate amount is met.  By setting a limit on the number of years or the amount of money, or including a sales threshold, a local government can establish more control over the amount of sales tax revenues that accrue to the municipality or county.  For example, a local government might agree that a business will receive 50 percent of state sales tax disbursements for 10 years that would otherwise have gone to the municipality, or up to $5 million.  Some agreements specify that the retailer must meet a certain sales threshold before the local government will rebate the sales taxes.  In some cases, both state and local sales tax revenue is rebated, while other agreements rebate just one or the other.
Looking at only rebate agreements that report a maximum limit, a total of $495.9 million of local sales tax revenues could be rebated to businesses and developers if the agreements' maximums are met.  Of all agreements analyzed, 206 either have a maximum rebate amount listed in the database, or, in some cases, the maximum was known to CMAP through past research on sales tax rebates.  This does not mean that the business or developer will receive the maximum amount listed, but rather it indicates a local government's commitment to provide the full funds if sales reach a certain threshold.  Since a maximum is unknown or not in place for nearly half of the agreements, the total amount of sales tax revenues that local governments could disburse to business via rebates could therefore exceed $495.9 million.  The rebates with the highest maximum amounts tended to be entire shopping center developments and auto dealerships.  The following chart summarizes the distribution of maximum rebates among the 206 agreements where the maximum was known. 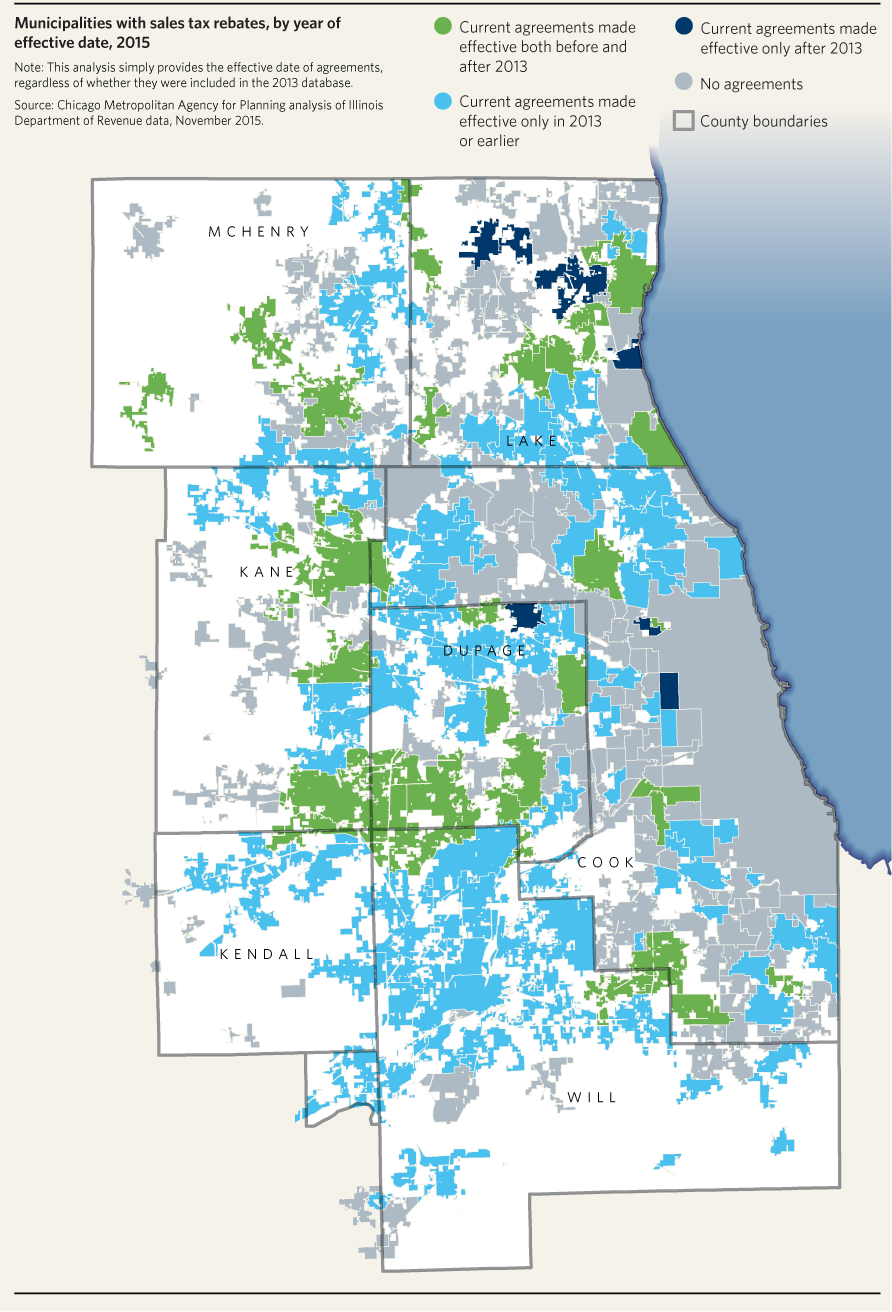 Effects on other jurisdictions

Developments receiving sales tax rebates are also frequently located on or adjacent to non-local roads. The preponderance of retail locations on non-local roads may be due to the higher traffic volumes that many retailers require that are more typical of the state and county networks.  The State and counties also receive sales tax revenue that would help offset their increased roadway-related costs due to new developments.  However, these jurisdictions may not experience a net fiscal benefit if revenues do not support the costs of infrastructure for these developments, or if a cumulative volume of new development generates the need for accelerated expansion and replacement of existing facilities.
Among the 359 sales tax rebates in the region, 88 percent of the developments were located on or adjacent to state and/or county maintained roadways.  The following chart illustrates developments receiving rebates by type of development and jurisdiction of adjacent roadways.  In addition, the market area of a given retail development likely encompasses roadways maintained by a variety of jurisdictions.