CMAP's regional economic indicators microsite features key measures of metropolitan Chicago's economy and, where applicable, compares these measures to peer metropolitan areas.  The microsite and accompanying Policy Update series are a resource for economic development professionals, planners, and others who seek to understand the complex factors that shape our region's competitiveness in the global economy.  This Policy Update provides a continuing dialogue on evidence of a regional skills gap in Chicago's manufacturing cluster, supplementing the microsite's Workforce and Trends indicators.

Like many other regions, metropolitan Chicago has experienced high unemployment rates in recent years.  Some employers, workforce developers, and economists assert that a number of manufacturing jobs remain unfilled due to a shortage of workers with necessary knowledge or training.  This "skills gap" has been discussed extensively by both policy makers and the media, with some concluding that the gap is a serious threat to economic growth, while others have argued that the skills gap is an issue for which no evidence exists.

Differing assessments about the validity and importance of the skills gap exist because measuring such a gap is complicated.  The skills gap is often assessed using either incomplete or qualitative information, such as employer surveys, rather than quantitative metrics.  This Policy Update looks at quantitative labor market data to determine the extent of the manufacturing skills gap in metropolitan Chicago.

As of 2014, Economic Modeling Specialists International (EMSI) estimated that 28,000 unemployed individuals in the Chicago region were seeking work in the manufacturing sector.  Despite this large pool of jobseekers, manufacturing companies claim they are having trouble finding skilled workers to fill open positions both in the region and nationwide.  Data presented here indicate that there may be shortages of Industrial Machinery Mechanics, Computer Numerically Controlled (CNC) Machine Operators and Programmers, and Welders in the region.

From an economic perspective, evidence of a manufacturing skills gap should include several discernible labor market trends that emerge as employers respond to worker shortages.  First, wages should rise for occupations that experience shortages as employers compete to retain or attract skilled workers.  Second, hours worked by skilled laborers should increase as employers turn to their existing workforce to increase production amidst shortages of new employees.  Finally, job openings should increase as demand for new workers rises.

In occupations with shortages of skilled workers, wages should rise faster than average as employers compete to attract talent from a small applicant pool.  The table below shows 2001-13 real wage growth in skilled manufacturing occupations, along with data for 2010-13, when the national conversation about skills gaps began to accelerate. The graphic below highlights occupations that had more robust wage growth than the national average. 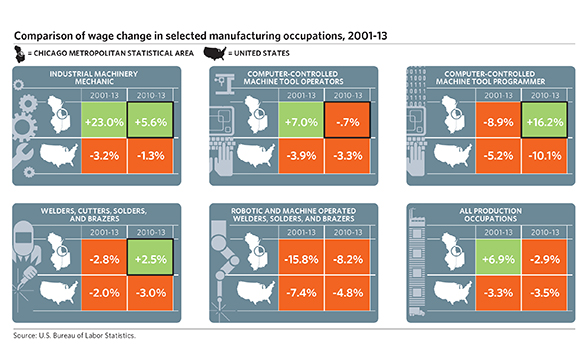 Industrial Machinery Mechanics, CNC Machine Programmers and Operators, and Welders (outlined in the figure above) have experienced more robust wage growth since 2010 in metropolitan Chicago than the national average, suggesting that wages have been increasing in response to a short supply of in-region workers with those skills. 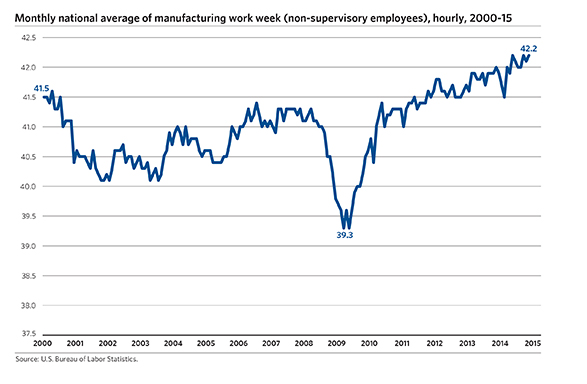 In addition to rising wages and longer work weeks, an increase in job openings can indicate high demand for skilled manufacturing workers.  EMSI forecasts annual job openings for each occupation in the Chicago metropolitan area.  Figure 3 shows estimates of openings for the three skilled manufacturing occupations that experienced robust wage growth in the region between 2010-13. 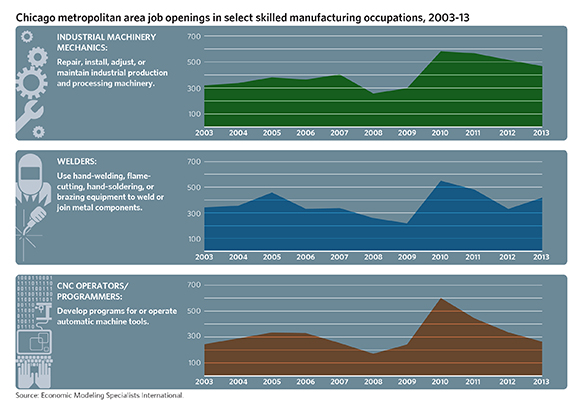 Note that the job openings forecast for each occupation nearly doubled between 2009-11, following the recession.  Since then, estimates of CNC Operators and Programmers job openings have declined to early-2000s levels while openings for Welders and Industrial Machinery Mechanics have remained higher than pre-recession levels.

Given the significant increase in openings between 2009-11, it is not surprising that the skills gap conversation began to take center stage in 2010 amidst a surge in demand for skilled workers.  While the data indicate increased demand, its cause is not certain.  Job openings may have risen sharply due to a recovering economy or a wave of recession-induced retirements.  It is also unclear why openings have declined in recent years for Industrial Machinery Mechanics and CNC Operators and Programmers.  Among the possible causes, employers may have filled positions that were open in 2010-11 or given up their search for qualified applicants.

Wages, hours worked, and job openings are measurable labor indicators of the regional manufacturing skills gap.  In many cases, the skills gap debate has relied on more generalized data.  Some policy makers, for example, point to decreased levels of apprenticeships nationwide as a driver of the recent skills gap in manufacturing.  Since 2002, federally registered skilled apprenticeships have declined nearly 40 percent -- from 469,000 in 2002 to 288,000 in 2013.  In an industry that requires significant hours of experiential learning, apprenticeships are an important way for skills to be passed on from trained individuals to new workers, and their decline could be fueling a shortage of skilled workers.

Spending on training among businesses has also been on the decline.  Annual surveys of employers by Training Magazine show that spending on employee training has declined from an average of $1,273 per learner in 2006 to $881 in 2013.  This could be due either to lean economic times in which funds for training are less available or to the proliferation of more cost-effective, on-line training solutions.

While much of the manufacturing skills gap dialogue has focused on technical skills, trouble finding employees may extend beyond technical competencies.  Manufacturing employees also must have so-called "soft skills" such as literacy, numeracy, reliability, problem solving, and the ability to work in teams.  The CMAP Manufacturing Drill-Down Report indicates that firms throughout the region have reported not being able to find sufficient workers with these skills.

Manufacturers' difficulty in filling skilled positions in the region could also be exacerbated by a jobs/housing spatial mismatch.  Initial CMAP analysis has shown that manufacturing workers tend to live in the City of Chicago and Cook County, while an increasing number of manufacturers have moved to collar counties.  This can make it difficult for manufacturers to find employees in suburbs, which generally have lower population densities and thus less access to public transit.

A final consideration in understanding the skills gap is today's fast pace of technical innovation, which requires workers to continually refine their skills.  This is especially true for high-tech manufacturing in which innovation is so rapid that students who have completed training programs will need more up-to-date training upon entering the labor force.

Adding up the evidence

The skills gap is a complex issue with few direct measures.  Data about wages, job openings, and work weeks must be woven together to understand the full conditions in the labor market.  Even with all three measures, it can still be difficult to determine whether individual occupations face a shortage of skilled workers.  Within the Chicago region, skills gaps are evident in several key manufacturing jobs, such as Industrial Machinery Mechanics, CNC Programmers and Operators, and Welders.  The severity of this recent manufacturing skills gap may have been intensified when demand for workers spiked as the economy began to recover in 2009.

Effective communication between education providers and employers can ensure that skills gap issues are addressed, and that individuals leaving high school or community college for a manufacturing career have the necessary skills.   With the nation's second largest manufacturing cluster, northeastern Illinois can continue to ensure its economic prosperity through effective workforce development, which depends on communication between educational institutions, training providers, and employers.

Policy makers and stakeholders in the region have long recognized the importance of connecting the region's education system with the needs of manufacturing employers.  Organizations such as the Workforce Board of Metropolitan Chicago  and the region's community colleges have helped the region secure grants for advanced manufacturing training.  Training providers such as the Jane Addams Resource Center and Symbol Training Institute also play a role in providing training for careers such as CNC Machinist and Welder, along with community colleges and high schools such as Austin Polytechnical Academy.  GO TO 2040 and the CMAP Manufacturing Drill-Down report both describe the need to enhance connections between employers and the education system; continuing and expanding these efforts will ensure the future health and competitiveness of the region's manufacturing cluster.