Sales, income, and property tax revenues are the primary source of general funding for state and local government. Governments typically have more discretion over these revenues in comparison to federal grants, user fees, or other funds that must be used for a specific program or purpose. Thus, fluctuations in these revenue sources can affect the ability of state and local governments to budget for public services.

The individual and corporate income taxes, along with the state sales tax, make up about 80 percent of state tax collections and over half of overall state-source revenues. In addition, the State of Illinois shares a proportion of income and sales tax revenues with local governments. The property tax is the largest component of local government revenues, making up about half of all local government revenues in the aggregate. This Policy Update examines the relative stability of these sources over the last twenty years.

For the purposes of this analysis, gross state product (GSP) is used as a marker of the state economy. The U.S. Bureau of Economic Analysis defines GSP as "the value added in production by the labor and capital located in a state." The following graph illustrates the cumulative percent change for the individual income tax, the corporate income tax, the state sales tax, and statewide property tax extensions as compared with the cumulative percent change in GSP since 1991. Statewide property tax data are unavailable for 2010. 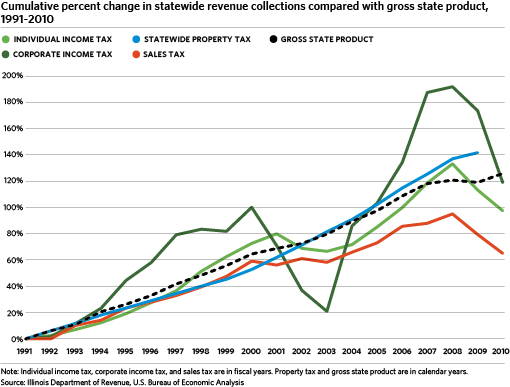 This differential may partially be a result of the fact that sales tax revenues do not reflect the volume of purchases made from all sectors of the economy in Illinois. Instead, sales tax revenues are based on the volume of sales of products in the sales tax base. Illinois' sales tax base is relatively narrow, primarily comprising of goods and few services. Nationally, consumer expenditures on services grew more than expenditures on goods between 1991 and 2010 -- 178.9 percent and 160 percent, respectively.

Property Taxes
Meanwhile, property tax extensions rose steadily every year, increasing 141.7 percent between 1991 and 2009. Unlike GSP, property tax revenues did not always follow the economic cycle and did not experience a drop during the recent economic recession. This is because changes in property values do not necessarily accompany changes in personal and corporate income or economic output. In addition, unlike other taxes, property tax bills are not sensitive to taxpayers' incomes and local governments can adjust property tax rates to maintain a stable stream of revenues even if property values decline during an economic cycle.

Implications for Fiscal Stability of Public Finances
Because the State's primary sources of revenue -- taxes on income and sales-- are not particularly stable and are not growing at the same rate at the overall economy, the State may have difficulty deriving revenues from its economic base in the future. Local governments also receive income and sales tax revenue in the form of revenue sharing disbursements from the State, and therefore are affected by the stability of these revenues. However, local governments are less affected by this volatility because they derive much of their revenues from more stable property taxes, a source not utilized by the State.

While the State's tax policies may not be able to alter the national economic cycles that cause some of the volatility in tax revenues, steps can be taken to ensure that growth in tax revenues follows the overall growth of the State's economic output. Broadening the tax base to include a broader scope of the economy would improve revenue stability and help revenues increase according to growth in the economy. Ways to broaden the tax base include expansion of the sales tax base to include additional services or of the individual income tax base to include retirement income. GO TO 2040 recommended convening a Regional Tax Policy Task Force to report to the CMAP board on tax policy issues, including broadening the sales and income tax bases. The Task Force recommended that the CMAP Board support policies that broaden both the sales and income tax bases. See the Task Force web page for more information about its activities.