CMAP's regional economic indicators microsite features key measures of metropolitan Chicago's economy and, where applicable, compares these measures to peer metropolitan areas.  The microsite and accompanying Policy Update series are a resource for economic development professionals, planners, and others who seek to understand the complex factors that shape our region's competitiveness in the global economy.  This Policy Update is an in-depth review of Science, Technology, Engineering, and Mathematics (STEM) occupations, supplementing the microsite's STEM indicator.

The forces of an increasingly globalized economy have significant influences on regions across the U.S. The Chicago region's industries now compete globally with established and emerging economies.  This trend has led to an increased focus on innovation and productivity as drivers of economic growth.  Continued innovation requires an increasingly skilled workforce that is both technically competent and capable of leveraging new ideas to improve existing products and services and create new ones.  Policymakers and industry leaders often point to STEM fields as examples of innovative occupations that can drive growth.

The innovative capacity of STEM occupations, along with above-average job growth projections, have led to widespread assertions that these positions are in high demand and provide job security in a time of economic uncertainty.  In contrast, CMAP analysis of recent STEM occupation trends shows that not all STEM occupations appear to be in high demand.  Within the Chicago region, employment in a number of STEM occupational categories has declined since 2001.   This trend, coupled with slow wage growth and a high number of STEM-educated individuals working outside of STEM fields, suggests that there may not be a shortage of qualified workers to fill STEM jobs in the region as some claim.  Nevertheless, STEM education can still play a role in ensuring that students receive training to think critically and collaboratively to solve problems in today's global economy.

Within the Chicago metropolitan area, there are approximately 570,000 STEM jobs.  STEM occupations fall under six broad categories: Architecture and Engineering; Computer and Math; Health Care; Life, Physical, and Social Science (LPSS); Postsecondary Education; and Sales and Management.  About 37 percent of STEM jobs in the region have an entry-level education requirement of an associate degree or less.  Health Care and Computer and Math are the two largest STEM fields in the Chicago region and, combined, account for two-thirds of all STEM employment. 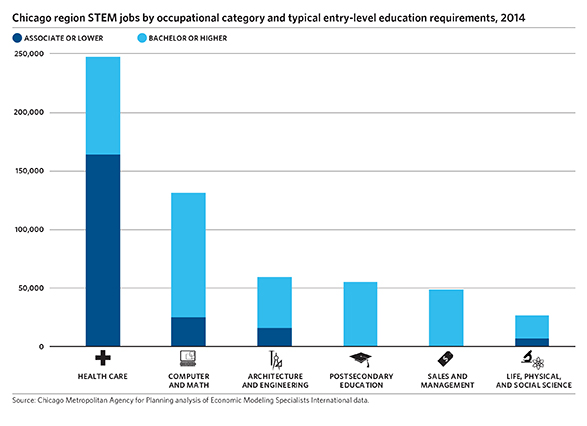 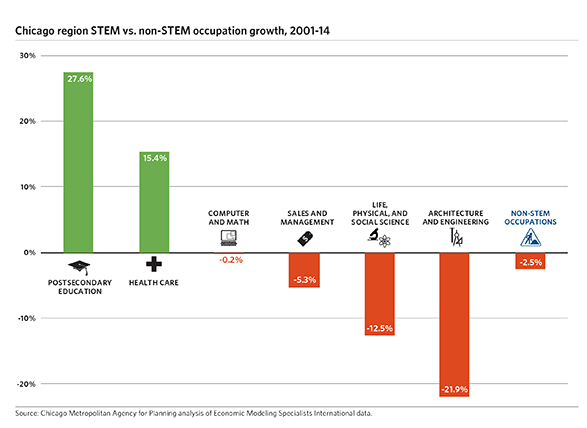 Since 2001, the region's demand for Postsecondary Education STEM teachers has remained relatively steady, growing by 27.6 percent and adding 12,000 jobs over the past 13 years.  Among its peer regions of Boston, Los Angeles, New York, and Washington, D.C., the Chicago region experienced the third fastest growing postsecondary education job market since 2001, exceeded only by New York and Washington, D.C.  The steady growth of Postsecondary Education jobs in the region reflects the emergence of a new economy in which an increasing proportion of jobs require more than a high school diploma and more people are attending postsecondary institutions.  In addition to holding jobs at colleges and universities, postsecondary teachers also work at community colleges and trade schools. 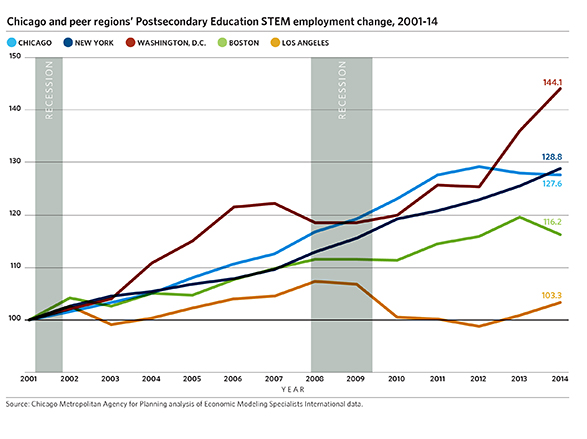 Job growth in the region's Health Care STEM occupations has been equally robust since 2001.  Although employment growth has been slower than in peer regions, metropolitan Chicago managed to add approximately 33,000 Health Care jobs since 2001.  Over half of these Health Care jobs have education requirements of an associate degree or less, making this one of the largest accessible middle-skill STEM fields.  These include positions such as Dental Hygienist, Emergency Medical Technician, or Pharmacy Technician.

Training individuals for the Health Care field has been an ongoing focus of workforce development initiatives in metropolitan Chicago.  The region's Workforce Investment Boards are currently administering $5 million in Health Professions Opportunity grants to provide job training for low-income individuals.  The program will serve over 800 individuals and provide training for many in-demand health care occupations.  Strong growth in health care jobs will likely continue as the region's population ages.  For many, health care services are a necessity, and thus these occupations are not subject to sharp employment declines during economic downturns. 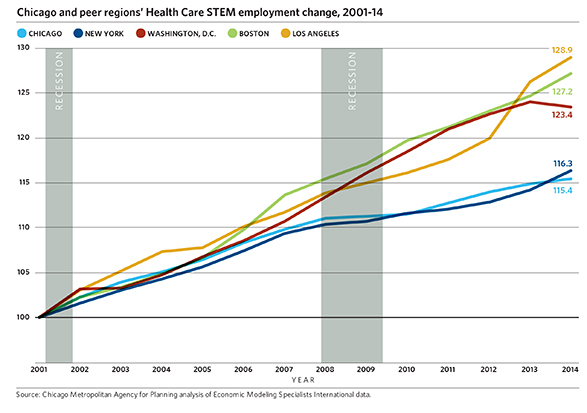 Although the region has seen growth trends on par with its peers in the fields of Postsecondary Education and Health Care, it has not fared as well in other STEM categories.  While all regions analyzed experienced a net loss of Architecture and Engineering STEM occupations between 2001-14, the decline was especially pronounced in metropolitan Chicago.  Employment in Architecture and Engineering occupations within the region has fallen by 16,800 jobs, or 21.9 percent, since 2001. This decline is faster than in any peer region. 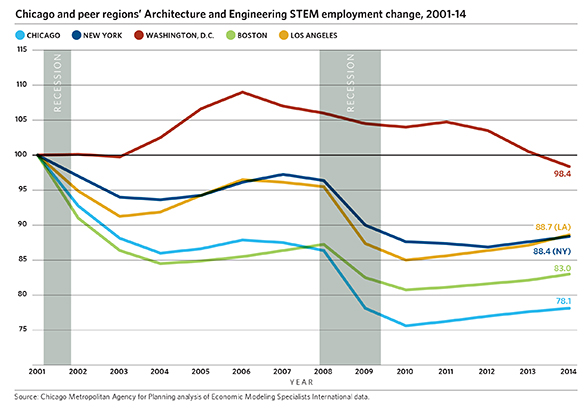 The region's employment decline has been fueled by sizable losses of both industrial and mechanical engineers.  Each occupation has separately lost over 2,000 jobs since 2001.  These losses are especially troubling for Chicago region because both occupations play an integral role in spurring innovation in its manufacturing cluster.

Employment trends in STEM occupations in the region generally match the larger trends occurring in the nation's economy.  This is not the case, though, with jobs in LPSS.  Since 2001, the nation and Chicago's peer metropolitan areas (save for New York) have seen significant employment growth in the field, while the Chicago region has experienced a decline.  Between 2001-14 the region lost over 3,800 LPSS jobs – a decline of 12.5 percent.  During the same time period, employment in the field increased by nearly 15 percent nationwide and over 20 percent in Boston and Los Angeles regions.

Even with its strong academic and research assets, metropolitan Chicago has long lagged behind its peer metropolitan areas in terms of LPSS employment concentration.  The region's location quotient in the field was 0.88 in 2001, indicating a below average concentration of employment in the region.  Over the last 13 years that concentration has declined further and the region's LPSS location quotient is now 0.71.  Metropolitan Chicago is home to 27,000 LPSS jobs, which is fewer than Boston (42,000), Los Angeles (57,000), Washington, D.C. (60,000) or New York (74,000). 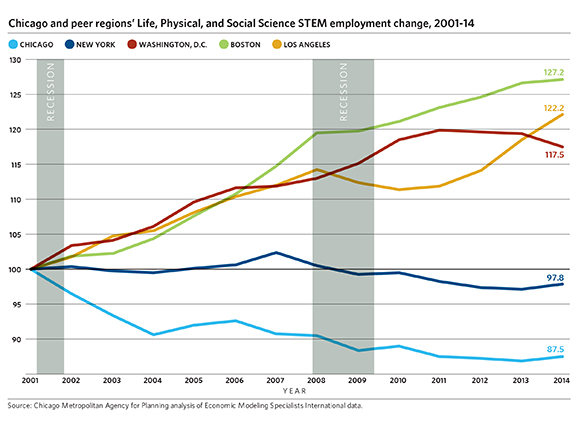 While data show mixed performance in the growth of STEM jobs, many proponents argue that there is an impending shortage of qualified workers.  Many assertions of STEM shortages, though, are based on future job growth projections or other indirect job demand measures.  Economists note that it is notoriously difficult to project future job growth, and occupation growth projections published by the U.S. Bureau of Labor Statistics are based on a number of labor market assumptions that may not match reality.

National trends indicate that there may not be a STEM shortage. While businesses that employ STEM graduates indicate that they have trouble finding STEM workers, research shows that wages in STEM occupations are not necessarily growing faster than average.  Economists often argue that a true shortage of STEM workers would force wages to rise as businesses compete to hire individuals with STEM backgrounds.  Further analysis has found that roughly half of all STEM workers in the U.S. leave the STEM employment field within ten years of graduating, evidence that there may not be a shortage of STEM workers if so many qualified workers are leaving the field.  The high departure rate of STEM educated individuals from the STEM field could also be a symptom of other issues, such as long hours, a competitive job environment, or lower pay in the field than what a STEM educated individual could receive elsewhere.

It is important to examine STEM employment trends in the region and compare employment trends with national discussions.  STEM occupations drive innovation, which plays a major role in producing sustainable economic prosperity and enhancing the global competitiveness of the region.  GO TO 2040 lays out several recommendations for helping metropolitan Chicago support innovation, such as studying and understanding the region's industry clusters, improving data and information systems, and fostering a culture of regional innovation.  Understanding underlying trends in STEM employment is just one of the many ways in which these goals are fulfilled.

GO TO 2040 notes that a talented and skilled workforce is critical to regional economic success. While it is unclear whether the current supply of STEM workers is large enough to meet demand, a STEM education provides important skills.  The integrated focus of the STEM education curriculum teaches students critical thinking skills that are important in any job setting -- STEM or otherwise.  All occupations require talented workers who can collaborate with one another and employ the scientific approach to problem solving that STEM education teaches.  As the national and regional economy continue to move towards innovation, critical thinking and collaborative skills will only increase in importance.