The Fiscal Cliff and Transportation Spending

In August 2011, Congress passed the Budget Control Act (BCA) as part of a compromise to increase the nation's debt ceiling. The BCA raised the debt ceiling and identified two main approaches to reduce the deficit through spending reductions. The first imposes caps on discretionary spending for the ten-year period FY 2012 through FY 2021. The second created the Joint Select Committee on Deficit Reduction (the "Super Committee") to identify at least $1.5 trillion in deficit reduction. That committee failed to reach agreement in November 2011, triggering a total of $1.2 trillion in automatic, across-the-board cuts beginning in January 2013 and continuing through FY 2021. The combination of these spending cuts with the expiration of several tax cuts at the end of this year is commonly referred to as the "fiscal cliff."

The Highway Trust Fund, which is subject to obligation limitations in appropriation bills, would be exempt from sequestration. As such, most federal highway and transit funding would be protected from automatic spending cuts. Similarly, transportation spending for other modes is protected in various trust funds. However, several billion in transportation spending comes from the General Fund, including the New Starts and Projects of National and Regional Significance programs, and this spending would be subject to sequestration. The National Association of Regional Councils estimates the following impacts of sequestration on various U.S. Department of Transportation programs: 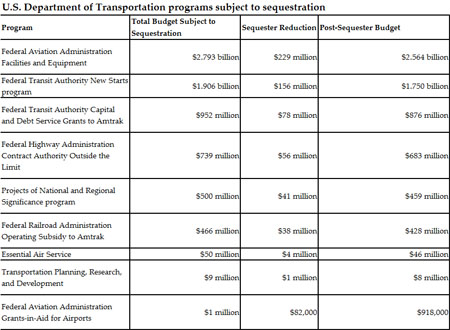 The fiscal cliff has serious implications for the nation, with the Congressional Budget Office predicting in a November 2012 report that the economy will slide into recession if the tax increases and spending cuts occur as currently scheduled. However, it is also important for the federal government to take steps toward controlling the national debt. Legislation passed during the current lame duck session could avert the fiscal crisis by identifying new revenues or new reductions in spending. This legislation could also improve the fiscal sustainability of the federal transportation program, which has suffered from inadequate funding for the past several years and faces insolvency in the near future.

One potential guide for policymakers comes from the bipartisan National Commission on Fiscal Responsibility and Reform, commonly referred to as the "Simpson-Bowles Commission" after its two co-chairs. Its report, issued in December 2010, makes several recommendations to substantially reduce deficits through discretionary spending cuts, comprehensive tax reform, healthcare cost containment, mandatory savings, reforms to Social Security, and reforms to the budget process. Perhaps most significantly for the transportation community, the Commission recommends a 15-cent increase in the federal gasoline tax to be phased in between 2013 and 2015. It further recommends that federal transportation spending be limited to Trust Fund revenues, eliminating the need for debt-financed General Fund transfers. GO TO 2040 supports increasing gas taxes in the near term and indexing them to inflation, but our region's comprehensive plan recognizes the need for an alternative funding source in the long term as vehicles become more fuel efficient.

As another example, a report from the Carnegie Endowment's Leadership Initiative on Transportation Solvency recommends creating an oil security and price stabilization fee. This fee would sometimes be applied as a five percent tax on oil imports and production. Additionally, the federal motor fuel tax would be converted to a sliding scale: The gas tax rate would fall as oil prices rise and would rise as oil prices fall. The report recommends a trigger price of $100 per barrel. For every $1 drop in oil prices below $100 per barrel, the fuel tax would rise one cent. And for every $3 increase in oil prices above $100 per barrel, the fuel tax would be reduced one cent. The report argues that this approach would help cushion consumers from price fluctuations, while also ensuring stable revenue to support the transportation system.

Several agencies have issued detailed analyses of the Budget Control Act and the estimated automatic spending cuts due to sequestration. For example, the Congressional Research Service (CRS) issued a report in May 2012, which provides a broad background on the issues. For a more detailed analysis, the White House Office of Management and Budget issued a report in September 2012, estimating the impact of sequestration across federal accounts.