The Chicago region's economic roots can be traced to its waterways, and for many years waterborne freight was the preferred method of shipping a variety of products to and from the region.  As freight transportation has evolved, the mode's share of overall goods movement has declined significantly, now making up a very small percentage of volumes regionally.  Nevertheless, waterborne freight still plays an important role in the region's freight system, particularly for transporting bulky materials over long distances.

The second in a series of three on air, water, and rail freight, this Policy Update looks at how the region's waterways are currently used for freight activity and the challenges  facing this mode.  In recent years, the waterway system has become a source of controversy both locally and nationally due to invasive species and other environmental concerns.  At the same time, aging infrastructure, plant closings, and insufficient public funding streams have reduced the waterway system's share of the region's freight volumes.  The comparatively low price of shipping by water, however, continues to keep it relevant.

Use of the CAWS

Chicago was originally settled at the portage between the Chicago River and the Des Plaines River, and its early growth was spurred by construction of the Illinois and Michigan Canal, which provided a link to the Mississippi River.  Today, the Chicago Area Waterway System (CAWS) consists of more than 100 miles of waterway, several locks, and port facilities in northeast Illinois and northwest Indiana.  The Chicago Sanitary and Ship Canal connects the Chicago River to the Des Plaines River and thus the Illinois River; the Cal-Sag Channel connects the Calumet River to the Chicago Sanitary and Ship Canal.  Additionally, the Port of Chicago is located at Lake Calumet and along the Calumet River.  Via the Illinois River, the CAWS gives our region the only direct waterway connection between the Great Lakes and Mississippi River systems. 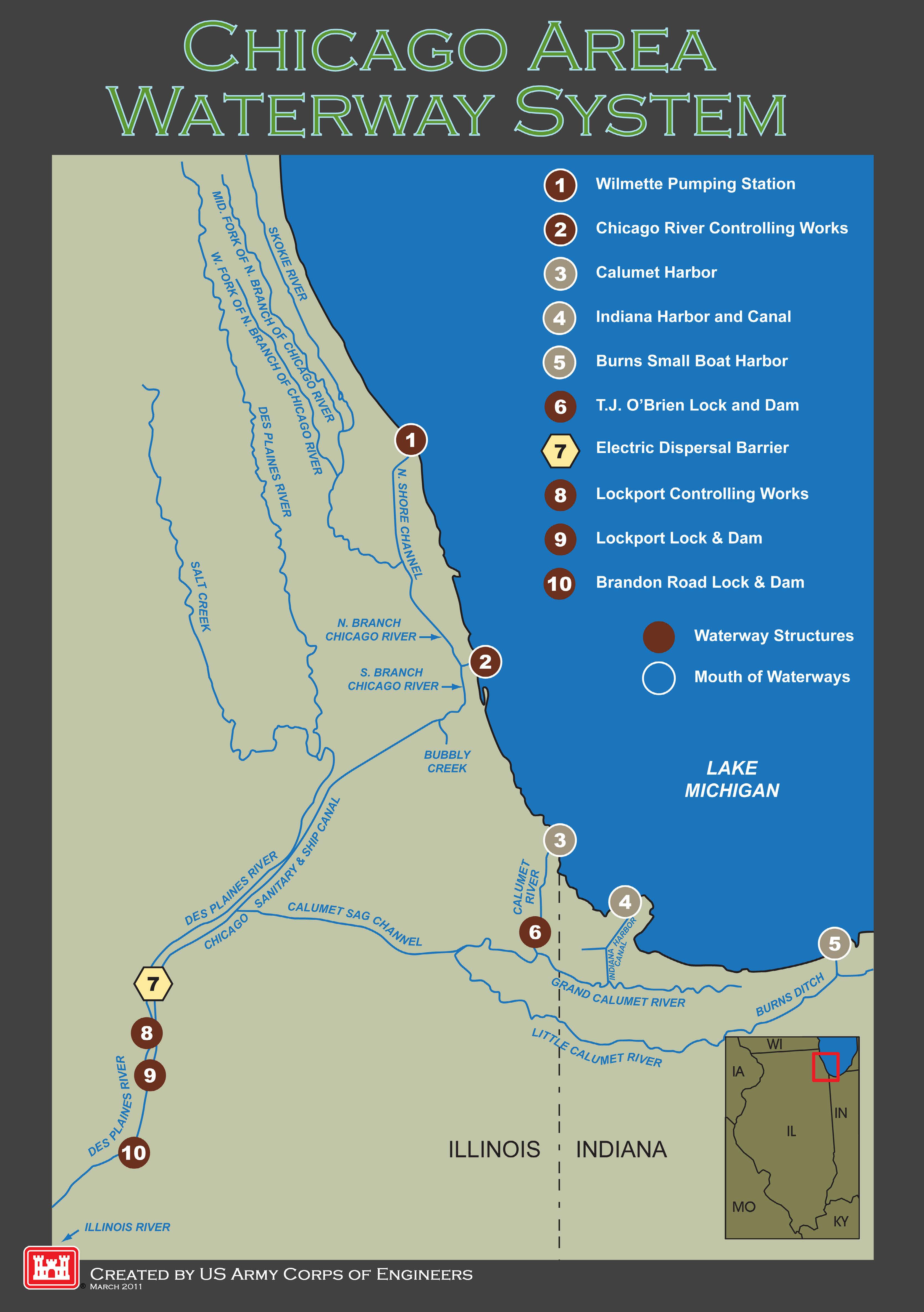 According to estimates of 2007 truck, rail, and air and water movements, the waterway system carried only 5 percent of the total freight tonnage in the greater Chicago region, as defined by the Bureau of Economic Analysis.  Nonetheless, access to water transport adds multimodal options to the region and thus contributes to the region's comparative advantage in freight.  Further, transporting goods by water is significantly cheaper than other freight modes, making it particularly attractive for shipments that are the highest in weight, the lowest in value, and the least time-sensitive.

Top Waterborne Commodities in the Chicago Region, 2007 and 2012 (kilotons)

Because these five commodity groups make up the vast majority of the waterborne freight activity for northeastern Illinois, any changes in industries that produce or use these materials have significant implications for waterborne freight overall.  For instance, in late 2012 two major coal-fired power plants in the Chicago region, the Fisk and Crawford Coal plants, closed.  Both plants were located on the CAWS, allowing delivery of coal by barge, and their closing may have a significant impact on the volume of coal shipped through the CAWS.  And, given that coal represents 31 percent of all waterborne freight in the Chicago FAF region, the closing of these plants may reduce overall volumes on the CAWS.

According to analysis completed in 2011 as part of the U.S. Army Corps of Engineers (USACE) Great Lakes and Mississippi River Interbasin Study, cargo traffic passing through the CAWS has faced a long-term decline since the 1990s.  Between 1994 and 2009, tonnage through the three main CAWS locks faced a compound annual growth rate of -4.7 percent, -6.8 percent, and -21 percent for Lockport, O'Brien, and the Chicago River, respectively.  For the same time period, volumes through the overall CAWS declined at a compound annual rate – of 4 percent.  Note that this report uses a smaller geography -- focusing on the Chicago Sanitary and Ship Canal, Chicago River, Cal-Sag Channel, and Calumet River and Harbor -- compared to the Chicago FAF region.  Additionally, according to data from the USACE's Waterborne Commerce Statistics Center, the Port of Chicago handled 15.4 million tons of freight in 2013, down from 17.1 million tons in 2012, 20.3 million tons in 2011, and 22.7 million tons in 2008.

In summary, the FAF data show a recent increase in waterborne freight in the region, while the USACE data indicate a long-term decline in waterborne shipments.  These differences may be due in part to the different geographies of the FAF region and the CAWS, as well as the different time periods covered by the datasets.  For example, there may have been recent developments to increase waterborne shipments through northeastern Illinois since 2009.  Despite the recent increases in shipping volumes through the CAWS, volumes still appear to be well below the levels seen in the 1990s.

Many facilities are in poor condition due to inadequate funding, as the U.S. Army Corps of Engineers has deferred maintenance throughout the CAWS, along with the broader Illinois River and Mississippi River systems.  For example, the O'Brien Lock, the main commercial access point to Lake Michigan on the CAWS, is categorized by USACE as an "unsafe or potentially unsafe facility."  The facility was evaluated for rehabilitation in 2004, but the estimated $51 million necessary for major rehabilitation has not been allocated by Congress.

Aged infrastructure on the CAWS presents another problem:  The lock chambers are too small for modern barge shipping.  Modern tows are often 1,200 feet in length, but the lock chambers are 1,000 feet at O'Brien and 600 feet at Lockport and Brandon Road.  To make the passage, tows must split in half to move through the lock, then reassemble on the other side to continue their trips.  This process significantly increases total lockage times, delaying traffic and increasing shipping time and cost.

The Port of Chicago -- also located within the CAWS system -- faces similar infrastructure challenges.  According to a 2008 Civic Federation report, the port district has not made significant capital investments since the opening of the Iroquois Landing terminal in 1981.  A proposed deal between the Illinois International Port District and a private concessionaire in July 2013 would have committed $500 million in private funding to modernize the port's facilities, but that proposal did not move forward.

The artificial connection between the Great Lakes basin and the Mississippi River basin raises concerns that aquatic nuisance species (ANS) may travel from one basin to the other, leading to potentially severe consequences for the ecosystem and economy.  For example, many experts are concerned that aggressive Asian carp species may transfer from the Mississippi River basin to the Great Lakes, potentially threatening commercial fishing and tourism industries.  A 2014 Congressional Research Service (CRS) report surveyed past attempts to quantify the economic impacts of these industries, citing estimates of $7 billion for recreational fishing and $17 billion for commercial fishing, along with estimates of $19 billion in sales and $6.5 billion in salaries due to recreational boating.  The CRS report also noted that several Great Lakes states have filed a number of requests in court to require the CAWS to be closed to prevent the transfer of ANS.  To date, these court motions have been unsuccessful, including a lawsuit led by the State of Michigan last year.

In 2014, the U.S. Army Corps of Engineers published the Great Lakes & Mississippi River Interbasin Study (GLMRIS), which evaluated eight alternatives to prevent ANS from transferring between the two basins.  These solutions range from "doing nothing," to applying interim control solutions, to performing a complete hydrologic separation of the two water basins.  The costs and timelines for these alternatives vary substantially, with immediate implementation at near-zero costs to $18 billion for 25-year implementation.  The GLMRIS report does not recommend any one solution, and an advisory committee continues to meet on related topics such as water quality and flood control.

The Corps is initiating a study related to the GLMRIS report to assess the viability of the Brandon Road Dam in Joliet as a single control point between the Great Lakes and Mississippi River basins.  All five locations where the CAWS has direct access to Lake Michigan lie upstream of Brandon Road, making that location a strategic point to reduce the risk of ANS transfer from the Mississippi River to the Great Lakes.  Due in February 2019, the report will assess various control and treatment technologies.

The Chicago Area Waterway System faces significant challenges, including poor infrastructure condition, lack of investment, and environmental concerns.  However, the region's waterways still carry a small but significant volume of freight, playing a particularly important role for certain commodities and providing multimodal options for the region's shippers.  Moving forward, the CAWS will be subject to additional technical studies, which should help better describe the issues related to ANS transfer, flooding, and water quality.  Transportation impacts of changes to the CAWS system may also be studied, with possible implications for the region's freight network.  CMAP continues to monitor and participate in the CAWS advisory committee.

GO TO 2040 calls on the region to create a more efficient freight network.  The CAWS touches on other topics relevant to GO TO 2040, such as environmental protection and livable communities.  New efforts such as Great Rivers Chicago are exploring these issues in greater depth. Although GO TO 2040 emphasizes road and rail networks because they are more closely tied to the surface transportation planning and programming work of metropolitan planning organizations (MPOs) like CMAP, understanding all freight modes is important to paint a complete picture of the region's freight mobility.