CHICAGO, November 12, 2013 -- Residents of metropolitan Chicago will benefit from improved transit, roads, bicycle, and pedestrian facilities through $286 million in federal transportation funds targeted over the next four years to support the GO TO 2040 comprehensive regional plan's goals for reducing congestion and improving air quality.

Allocated for the seven-county region of Cook, DuPage, Kane, Kendall, Lake, McHenry, and Will by the Chicago Metropolitan Agency for Planning (CMAP), these funds are made available through the federal Congestion Mitigation and Air Quality (CMAQ) Improvement Program. Combined with previous CMAQ funding cycles, these awards make up a five-year regional program of $582 million.

The 51 projects were selected and reviewed publicly by CMAP committees made up of transportation experts and stakeholders. Highlights include:

In addition to their congestion-reduction benefits, the project are collectively estimated to eliminate 298.9 kilograms daily of volatile organic compound (VOC) emissions, which are among the primary precursors to ground-level ozone that is harmful to breathe.

"CMAP is deeply committed to transparency in selecting projects that maintain and modernize our current transportation system as recommended in the GO TO 2040 plan," said CMAP Board chairman Gerald Bennett, mayor of Palos Hills. "These projects will improve highway corridors, create new bicycle paths, develop new transit service, and enhance overall connectivity while improving air quality in the region."

Reviewed and analyzed by committees of subject-matter experts and stakeholders based on competitive proposals, the proposed projects respond to priorities recommended by GO TO 2040, which emphasizes investments to maintain and modernize the existing transportation system, adopt best practices in new technologies, establish seamless coordination between transportation modes, and include transit components as part of major highway capital projects.

CMAP encouraged proposals from the public and private sectors. To be federally eligible, each project must have as its "sponsor" a state agency or unit of government, such as a county, municipality, township, park district, forest preserve district, or library district. Most projects require an 80:20 split of federal to local dollars. CMAP received more than 121 applications requesting over $896 million in federal funds.

The CMAQ project guidelines describe eligible activities that include: 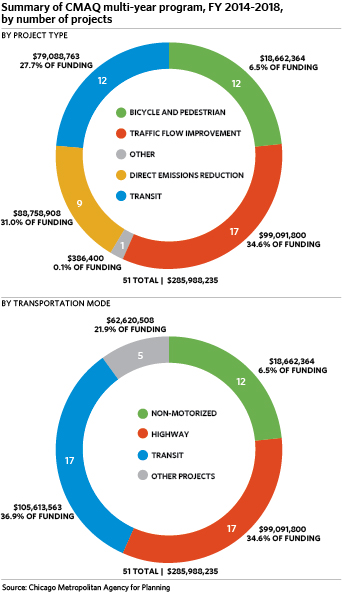 About CMAP. The Chicago Metropolitan Agency for Planning (CMAP) is the comprehensive regional planning organization for the northeastern Illinois counties of Cook, DuPage, Kane, Kendall, Lake, McHenry, and Will. By state and federal law, CMAP is responsible for producing the region's official, integrated plan for land use and transportation. The agency's innovative GO TO 2040 planning campaign develops and implements strategies to shape the region's transportation system and development patterns, while also addressing the natural environment, economic development, housing, education, human services, and other quality-of-life factors. See http://www.cmap.illinois.gov/ for more information.